Encyclopedia
A stall is a small enclosure of some kind, usually less enclosed than a room
Room
A room is any distinguishable space within a structure.Room may also refer to:* Room , by Emma Donoghue* Room, Nepal* Room for PlayStation Portable, a social networking service* Thomas Gerald Room , Australian mathematician...
.

Some commercial marketplace
Marketplace
A marketplace is the space, actual, virtual or metaphorical, in which a market operates. The term is also used in a trademark law context to denote the actual consumer environment, ie. the 'real world' in which products and services are provided and consumed.-Marketplaces and street markets:A...
s, including market square
Market square
The market square is a feature of many European and colonial towns. It is an open area where market stalls are traditionally set out for trading, commonly on one particular day of the week known as market day....
s or flea market
Flea market
A flea market or swap meet is a type of bazaar where inexpensive or secondhand goods are sold or bartered. It may be indoors, such as in a warehouse or school gymnasium; or it may be outdoors, such as in a field or under a tent...
s, may erect (or allow merchants to erect) more permanent stalls. Conversely, some stalls incorporate wheel
Wheel
A wheel is a device that allows heavy objects to be moved easily through rotating on an axle through its center, facilitating movement or transportation while supporting a load, or performing labor in machines. Common examples found in transport applications. A wheel, together with an axle,...
s, tow hitch
Tow hitch
A tow hitch is a device attached to the chassis of a vehicle for towing or a towbar to an aircraft nose gear, or paired main gears....
es, or other devices to make transportation of the stall easier. Most can be closed and locked when not in use.

A merchant will sometimes use an open-air stall in front of a more permanent store building in order to entice passers-by with eye-catching goods or discounts. Such a stall can be taken indoors and locked up after business hours.

Stalls are commonly used by farmers' market
Farmers' market
A farmers' market consists of individual vendors—mostly farmers—who set up booths, tables or stands, outdoors or indoors, to sell produce, meat products, fruits and sometimes prepared foods and beverages...
s and street food
Street food
Street food is ready-to-eat food or drink sold in a street or other public place, such as a market or fair, by a hawker or vendor, often from a portable stall. While some street foods are regional, many are not, having spread beyond their region of origin. Most street food are both finger and fast...
vendors, and may also appear as display areas at fair
Fair
A fair or fayre is a gathering of people to display or trade produce or other goods, to parade or display animals and often to enjoy associated carnival or funfair entertainment. It is normally of the essence of a fair that it is temporary; some last only an afternoon while others may ten weeks. ...
s and convention
Convention (meeting)
A convention, in the sense of a meeting, is a gathering of individuals who meet at an arranged place and time in order to discuss or engage in some common interest. The most common conventions are based upon industry, profession, and fandom...
s.

An animal stall is an enclosure housing one or a few animals. Often this too can be a temporary or permanent enclosure at a market (see above) but stalls for animals can often be found wherever animals are kept: a horse stable
Stable
A stable is a building in which livestock, especially horses, are kept. It most commonly means a building that is divided into separate stalls for individual animals...
is often a purpose-built and permanent structure. A farmer's barn
Barn
A barn is an agricultural building used for storage and as a covered workplace. It may sometimes be used to house livestock or to store farming vehicles and equipment...
may be subdivided into animal stalls or pens for cows and other livestock
Livestock
Livestock refers to one or more domesticated animals raised in an agricultural setting to produce commodities such as food, fiber and labor. The term "livestock" as used in this article does not include poultry or farmed fish; however the inclusion of these, especially poultry, within the meaning...
.

In horse care
Horse care
There are many aspects to horse care. Horses, ponies, mules, donkeys and other domesticated equids require attention from humans for optimal health and long life.-Living environment:...
, the standard dimensions for a box stall vary from 10' by 12' to 14' by 14', depending on local cultural traditions, the breed of horse, gender, and any special needs. Mares with foals often are kept in double stalls. Stallions, kept alone with less access to turnout, are also often given larger quarters. Ponies sometimes are kept in smaller box stalls, and warmbloods or draft horses may need larger ones. Box stalls usually contain a layer of absorbent bedding such as straw or wood shavings and need to be cleaned daily. 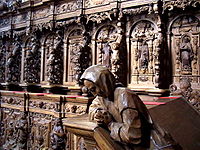