Encyclopedia
Slow Food is an international movement founded by Carlo Petrini
Carlo Petrini
Carlo Petrini , born in the province of Cuneo in the commune of Bra in Italy, is the founder of the International Slow Food Movement...
in 1986. Promoted as an alternative to fast food
Fast food
Fast food is the term given to food that can be prepared and served very quickly. While any meal with low preparation time can be considered to be fast food, typically the term refers to food sold in a restaurant or store with preheated or precooked ingredients, and served to the customer in a...
, it strives to preserve traditional and regional cuisine
Cuisine
Cuisine is a characteristic style of cooking practices and traditions, often associated with a specific culture. Cuisines are often named after the geographic areas or regions that they originate from...
and encourages farming of plant
Plant
Plants are living organisms belonging to the kingdom Plantae. Precise definitions of the kingdom vary, but as the term is used here, plants include familiar organisms such as trees, flowers, herbs, bushes, grasses, vines, ferns, mosses, and green algae. The group is also called green plants or...
s, seed
Seed
A seed is a small embryonic plant enclosed in a covering called the seed coat, usually with some stored food. It is the product of the ripened ovule of gymnosperm and angiosperm plants which occurs after fertilization and some growth within the mother plant...
s and livestock characteristic of the local ecosystem
Ecosystem
An ecosystem is a biological environment consisting of all the organisms living in a particular area, as well as all the nonliving , physical components of the environment with which the organisms interact, such as air, soil, water and sunlight....
. It was the first established part of the broader Slow movement
Slow Movement
The Slow Movement advocates a cultural shift toward slowing down life's pace. It began with Carlo Petrini's protest against the opening of a McDonald's restaurant in Piazza di Spagna, Rome in 1986 that sparked the creation of the Slow Food organization...
. The movement has since expanded globally to over 100,000 members in 132 countries. Its goals of sustainable foods and promotion of local small businesses are paralleled by a political agenda directed against globalization of agricultural products. 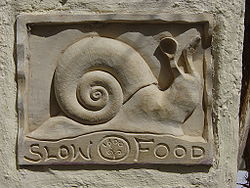 Slow Food began in Italy with the founding of its forerunner organization, Arcigola, in 1986 to resist the opening of a McDonald's
McDonald's
McDonald's Corporation is the world's largest chain of hamburger fast food restaurants, serving around 64 million customers daily in 119 countries. Headquartered in the United States, the company began in 1940 as a barbecue restaurant operated by the eponymous Richard and Maurice McDonald; in 1948...
near the Spanish Steps
Spanish Steps
The Spanish Steps are a set of steps in Rome, Italy, climbing a steep slope between the Piazza di Spagna at the base and Piazza Trinità dei Monti, dominated by the Trinità dei Monti church at the top. The Scalinata is the widest staircase in Europe...
in Rome. In 1989, the founding Manifesto of the international Slow Food movement was signed in Paris, France by delegates from 15 countries. This was done not so much a protest against the restaurant chain as a protest against big international business interests.

The Slow Food organization
Slow Movement
The Slow Movement advocates a cultural shift toward slowing down life's pace. It began with Carlo Petrini's protest against the opening of a McDonald's restaurant in Piazza di Spagna, Rome in 1986 that sparked the creation of the Slow Food organization...
spawned by the movement has expanded to include over 100,000 members with chapters in over 132 countries. All totaled, 800 local convivia chapters exist. 360 convivia in Italy — to which the name condotta (singular) / condotte (plural) applies — are composed of 35,000 members, along with 450 other regional chapters around the world. The organizational structure is decentralized: each convivium has a leader who is responsible for promoting local artisans, local farmers, and local flavors through regional events such as Taste Workshops, wine tastings, and farmers' markets.

In 2004, Slow Food opened a University of Gastronomic Sciences
University of Gastronomic Sciences
University of Gastronomic Sciences is an international academic institution in Northern Italy. The campus is located in Bra, a city in the north-west region of Piedmont...
at Pollenzo, in Piedmont
Piedmont
Piedmont is one of the 20 regions of Italy. It has an area of 25,402 square kilometres and a population of about 4.4 million. The capital of Piedmont is Turin. The main local language is Piedmontese. Occitan is also spoken by a minority in the Occitan Valleys situated in the Provinces of...
, and Colorno
Colorno
Colorno is a comune in the Province of Parma in the Italian region Emilia-Romagna, located about 90 km northwest of Bologna and about 15 km north of Parma...
, in Emilia-Romagna
Emilia-Romagna
Emilia–Romagna is an administrative region of Northern Italy comprising the two historic regions of Emilia and Romagna. The capital is Bologna; it has an area of and about 4.4 million inhabitants....
, Italy
Italy
Italy , officially the Italian Republic languages]] under the European Charter for Regional or Minority Languages. In each of these, Italy's official name is as follows:;;;;;;;;), is a unitary parliamentary republic in South-Central Europe. To the north it borders France, Switzerland, Austria and...
. Carlo Petrini and Massimo Montanari
Massimo Montanari
Massimo Montanari, currently Professor of Medieval History at Bologna University, is one of the leading world experts in Food History and Culture. His interest in the subject stems from his researches and studies in Medieval Agrarian History...
are the leading figures in the creation of the University, whose goal is to promote awareness of good food and nutrition
Nutrition
Nutrition is the provision, to cells and organisms, of the materials necessary to support life. Many common health problems can be prevented or alleviated with a healthy diet....
.

The Slow Food movement incorporates a series of objectives within its mission, including:


From time to time, Slow Food intervenes directly in market transactions; for example, Slow Food was able to preserve four varieties of native American turkey
Turkey (bird)
A turkey is a large bird in the genus Meleagris. One species, Meleagris gallopavo, commonly known as the Wild Turkey, is native to the forests of North America. The domestic turkey is a descendant of this species...
by ordering 4,000 of their eggs and commissioning their raising and slaughtering and delivery to market.

It is difficult to gauge the extent of the success of the Slow Food movement, considering that the organization itself is still very young. The current grassroots nature of Slow Food is such that few people in Europe
Europe
Europe is, by convention, one of the world's seven continents. Comprising the westernmost peninsula of Eurasia, Europe is generally 'divided' from Asia to its east by the watershed divides of the Ural and Caucasus Mountains, the Ural River, the Caspian and Black Seas, and the waterways connecting...
and especially the United States
United States
The United States of America is a federal constitutional republic comprising fifty states and a federal district...
are aware of it.

Statistics show that Europe, and Germany in particular, is a much bigger consumer of organics
Organic food
Organic foods are foods that are produced using methods that do not involve modern synthetic inputs such as synthetic pesticides and chemical fertilizers, do not contain genetically modified organisms, and are not processed using irradiation, industrial solvents, or chemical food additives.For the...
than the US. Slow Food has contributed to the growing awareness of health concerns in Europe, as evidenced by this fact, but on society as a whole, Slow Food has had little effect. An example of this is the fact that tourists visit Slow Food restaurants more than locals, but Slow Food and its sister movements are still young. In an effort to spread the ideals of anti-fast food, Slow Food has targeted the youth of the nations in primary and secondary schools. Volunteers help build structural frameworks for school gardens and put on workshops to introduce the new generation to the art of farming. 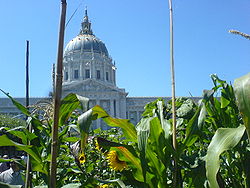 , Slow Food USA has a membership of roughly 16,000. Notable members include Alice Waters
Alice Waters
Alice Louise Waters is an American chef, restaurateur, activist, and author. She is the owner of Chez Panisse, a Berkeley, California restaurant famous for its organic, locally-grown ingredients and for pioneering California cuisine.Waters opened the restaurant in 1971. It has consistently ranked...
, Eric Schlosser
Eric Schlosser
Eric Schlosser is an American journalist and author known for investigative journalism, such as in his books Fast Food Nation, Reefer Madness and Chew On This.- Personal History :...
, and Michael Pollan
Michael Pollan
Michael Pollan is an American author, journalist, activist, and professor of journalism at the UC Berkeley Graduate School of Journalism. A 2006 New York Times book review describes him as a "liberal foodie intellectual."...
. The movement has spread throughout the United States with the aid of college organizations. Notably, Swarthmore College
Swarthmore College
Swarthmore College is a private, independent, liberal arts college in the United States with an enrollment of about 1,500 students. The college is located in the borough of Swarthmore, Pennsylvania, 11 miles southwest of Philadelphia....
, and Le Cordon Bleu College of Culinary Arts Atlanta
Le Cordon Bleu College of Culinary Arts Atlanta
Le Cordon Bleu College of Culinary Arts Atlanta is a 2-year private for-profit college in Georgia. The College is a branch of Western Culinary Institute in Portland, Oregon...
. The student run Good Food Project have been at the forefront of the Slow Food movement in Philadelphia, which is headed by Swarthmore German Professor Hansjakob Werlen.

In 2008, Slow Food USA hosted its largest gathering to date when 50,000 people attended the inaugural Slow Food Nation
Slow Food Nation
Slow Food Nation was an event organized by Slow Food USA, which celebrates slow and sustainable foods. One of the largest food events in U.S. history, Slow Food Nation attracted an estimated audience of more than 50,000 people...
in San Francisco. Founded by Alice Waters
Alice Waters
Alice Louise Waters is an American chef, restaurateur, activist, and author. She is the owner of Chez Panisse, a Berkeley, California restaurant famous for its organic, locally-grown ingredients and for pioneering California cuisine.Waters opened the restaurant in 1971. It has consistently ranked...
, it was the largest celebration of American food (other than the annual American holiday of Thanksgiving) in history.

Slow Food UK's head office is based in Covent Garden London (previously based in the small town of Ludlow, Shropshire
Ludlow
Ludlow is a market town in Shropshire, England close to the Welsh border and in the Welsh Marches. It lies within a bend of the River Teme, on its eastern bank, forming an area of and centred on a small hill. Atop this hill is the site of Ludlow Castle and the market place...
). Slow Food has regional groups all over the UK, that are run by Slow Food members.

The Australian slow food movement aims to increase community awareness of the value from farm to market of good, clean, local food. A campaign is being mounted to have included in Slow Food International's Ark of Taste
Ark of Taste
The Ark of Taste is an international catalogue of heritage foods in danger of extinction which is maintained by the global Slow Food movement. The Ark is designed to preserve at-risk foods that are sustainably produced, unique in taste, and part of a distinct ecoregion...
(nationally nominated threatened produce and food products) the following Australian foods: Kangaroo Island
Kangaroo Island
Kangaroo Island is Australia's third-largest island after Tasmania and Melville Island. It is southwest of Adelaide at the entrance of Gulf St Vincent. Its closest point to the mainland is off Cape Jervis, on the tip of the Fleurieu Peninsula in the state of South Australia. The island is long...
's Ligurian bee honey, the Queensland-native bunya nut, bull-boar sausage from Victoria and Tasmanian Leatherwood honey.