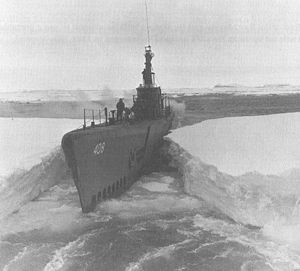 Operation Highjump officially titled The United States Navy Antarctic Developments Program, 1946-1947, was a United States Navy
United States Navy
The United States Navy is the naval warfare service branch of the United States Armed Forces and one of the seven uniformed services of the United States. The U.S. Navy is the largest in the world; its battle fleet tonnage is greater than that of the next 13 largest navies combined. The U.S...
operation organized by RADM Richard E. Byrd
Richard Evelyn Byrd
Rear Admiral Richard Evelyn Byrd, Jr., USN was a naval officer who specialized in feats of exploration. He was a pioneering American aviator, polar explorer, and organizer of polar logistics...
Jr. USN, (Ret), Officer in Charge, Task Force 68, and led by RADM Richard H. Cruzen, USN, Commanding Officer, Task Force 68. Operation Highjump commenced 26 August 1946 and ended in late February 1947. Task Force 68 included 4,700 men, 13 ships, and multiple aircraft. The primary mission of Operation Highjump was to establish the Antarctic
Antarctic
The Antarctic is the region around the Earth's South Pole, opposite the Arctic region around the North Pole. The Antarctic comprises the continent of Antarctica and the ice shelves, waters and island territories in the Southern Ocean situated south of the Antarctic Convergence...
research base Little America IV.

Highjump’s objectives, according to the US Navy report of the operation , were:

The Western Group of ships reached the Marquesas Islands
Marquesas Islands
The Marquesas Islands enana and Te Fenua `Enata , both meaning "The Land of Men") are a group of volcanic islands in French Polynesia, an overseas collectivity of France in the southern Pacific Ocean. The Marquesas are located at 9° 00S, 139° 30W...
on December 12, 1946, whereupon the Henderson
USS Henderson (DD-785)
USS Henderson was a of the United States Navy, the second Navy ship of that name, and the first named for United States Marine Corps Major Lofton R. Henderson...
and Cacapon set up weather monitoring stations. By the 24th, the Currituck
USS Currituck (AV-7)
USS Currituck was the first of four Currituck class seaplane tenders, and was nicknamed the Wild Goose. She was built during World War II and served during the Cold War....
had begun launching aircraft on reconnaissance missions.

On January 1, 1947, LCDR Thompson and Chief Petty Officer Dixon utilized "Jack Browne" masks
Diving mask
A diving mask is an item of diving equipment that allows scuba divers, free-divers, and snorkelers to see clearly underwater. When the human eye is in direct contact with water as opposed to air, its normal environment, light entering the eye is refracted by a different angle and the eye is unable...
and DESCO
DESCO
DESCO is an underwater diving equipment maker which was first organized in 1937 in Wisconsin in the USA as Diving Equipment and Salvage Co.It was founded by:-...
Oxygen rebreather
Rebreather
A rebreather is a type of breathing set that provides a breathing gas containing oxygen and recycled exhaled gas. This recycling reduces the volume of breathing gas used, making a rebreather lighter and more compact than an open-circuit breathing set for the same duration in environments where...
s to log the first dive
Ice diving
Ice diving is a type of penetration diving where the dive takes place under ice. Because diving under ice places the diver in an overhead environment typically with only a single entry/exit point, it is considered an advanced type of diving requiring special training...
by Americans under the Antarctic. Paul Allman Siple, PhD was the senior U.S. War Department representative on the expedition. Dr. Siple was the same Eagle Scout who accompanied Admiral Byrd on the previous Byrd Antarctic expeditions.

On December 30, 1946, aviation radiomen Wendell K. Hendersin, Fredrick W. Williams, and Ensign Maxwell A. Lopez were killed when their PBM Mariner
PBM Mariner
The Martin PBM Mariner was a patrol bomber flying boat of World War II and the early Cold War period. It was designed to complement the PBY Catalina in service. A total of 1,366 were built, with the first example flying on 18 February 1939 and the type entering service in September 1940.-Design and...
George 1 crashed
1946 Antarctica PBM Mariner crash
The 1946 Antarctica PBM Mariner crash occurred on December 30, 1946 on Thurston Island, Antarctica when a United States Navy PBM Mariner crashed during a blizzard. The aircraft, designated George 1, was supporting Operation Highjump....
during a blizzard. The surviving six crewmembers, including Aviation Radioman James H. Robbins and co-pilot William Kearns, were rescued 13 days later. A plaque was later erected at the McMurdo Station
McMurdo Station
McMurdo Station is a U.S. Antarctic research center located on the southern tip of Ross Island, which is in the New Zealand-claimed Ross Dependency on the shore of McMurdo Sound in Antarctica. It is operated by the United States through the United States Antarctic Program, a branch of the National...
research base, honoring the three killed crewmen.

In December 2004, an attempt was made to locate the remains of the plane. There are ongoing efforts to repatriate the bodies of the three men killed in the crash Killed airman Maxwell A. Lopez had a mountain named in his honour after his death, Mount Lopez
Mount Lopez
Mount Lopez is a peak of the Walker Mountains, located 5 miles east of Landfall Peak in the west part of Thurston Island. Delineated from aerial photographs taken by U.S. Operation Highjump, 1946-47. Named by Advisory Committee on Antarctic Names for Ensign Maxwell A. Lopez, U.S...
on Thurston Island
Thurston Island
Thurston Island is an ice-covered, glacially dissected island, long, wide and in area, lying a short way off the NW end of Ellsworth Land, Antarctica. It is the third largest island of Antarctica, after Alexander Island and Berkner Island...
.

Additionally, Vance N. Woodall died during a "ship unloading accident" sometime after December 30, 1946. In a crew profile, deckman Edward Beardsley described his worst memory as "when Seaman Vance Woodall died on the Ross Ice Shelf under a piece of roller equipment designed to "pave" the ice to build an airstrip."

Father William Menster
William Menster
Father William J. Menster was a Roman Catholic priest of the Archdiocese of Dubuque. Menster was best known as the first member of the clergy to visit Antarctica....
served as chaplain
Chaplain
Traditionally, a chaplain is a minister in a specialized setting such as a priest, pastor, rabbi, or imam or lay representative of a religion attached to a secular institution such as a hospital, prison, military unit, police department, university, or private chapel...
during the expedition. He became the first member of the clergy to visit the continent, and in a service in 1947 he consecrated Antarctica.

The Central Group of ships reached the Bay of Whales
Bay of Whales
The Bay of Whales is a natural ice harbor, or iceport, indenting the front of Ross Ice Shelf just north of Roosevelt Island. It is the southernmost point of open ocean not only of the Ross Sea, but worldwide...
on January 15, 1947, where they constructed temporary runway
Runway
According to ICAO a runway is a "defined rectangular area on a land aerodrome prepared for the landing and take-off of aircraft." Runways may be a man-made surface or a natural surface .- Orientation and dimensions :Runways are named by a number between 01 and 36, which is generally one tenth...
s along the glaciers, in a base dubbed Little America IV.

Naval ships and personnel were withdrawn back to the United States in late February 1947 and the expedition was terminated, due to the early approach of winter and worsening weather conditions (Summerhayes & Beeching, 2007, p. 15-16).

Admiral Byrd in an interview with Lee van Atta of International News Service
International News Service
International News Service was a U.S.-based news agency founded by newspaper publisher William Randolph Hearst in 1909.Established two years after the Scripps family founded the United Press Association, INS scrapped among the newswires...
aboard the expeditions command ship, the USS Mount Olympus
USS Mount Olympus (AGC-8)
USS Mount Olympus was a Mount McKinley-class amphibious force command ship, named after the highest peak in the Olympic Mountains of Washington...
, discussed the lessons learned from the operation. The interview appeared in the Wednesday, March 5, 1947 edition of the Chilean newspaper El Mercurio
El Mercurio
El Mercurio is a conservative Chilean newspaper with editions in Valparaíso and Santiago. Its Santiago edition is considered the country's paper-of-record and its Valparaíso edition is the oldest daily in the Spanish language currently in circulation. El Mercurio is owned by El Mercurio S.A.P...
, and read in part as follows:
‘Admiral Richard E. Byrd warned today that the United States should adopt measures of protection against the possibility of an invasion of the country by hostile planes coming from the polar regions. The admiral explained that he was not trying to scare anyone, but the cruel reality is that in case of a new war, the United States could be attacked by planes flying over one or both poles. This statement was made as part of a recapitulation of his own polar experience, in an exclusive interview with International News Service. Talking about the recently completed expedition, Byrd said that the most important result of his observations and discoveries is the potential effect that they have in relation to the security of the United States. The fantastic speed with which the world is shrinking – recalled the admiral – is one of the most important lessons learned during his recent Antarctic exploration. I have to warn my compatriots that the time has ended when we were able to take refuge in our isolation and rely on the certainty that the distances, the oceans, and the poles were a guarantee of safety.’

After the operation ended, a follow-up Operation Windmill
Operation Windmill
Operation Windmill was the United States Navy's Second Antarctica Developments Project, an exploration and training mission to Antarctica in 1947–1948. This operation was a follow up to the First Antarctica Development Project known as Operation Highjump. The expedition was commanded by Commander...
returned to the area, in order to provide ground-truthing to the aerial photography of Highjump. Finn Ronne
Finn Ronne
Finn Ronne was a U.S. Antarctic explorer.-Background:Finn Ronne was born in Horten, in Vestfold county, Norway. His father, Martin Rønne , was a polar explorer and served in Roald Amundsen's successful expedition to the South Pole...
also financed a private operation to the same territory, until 1948.

As with other U.S. Antarctic expeditions, interested persons were allowed to send letters with enclosed envelopes to the base. Here commemorative cachet
Cachet
In philately, a cachet is a printed or stamped design or inscription, other than a cancellation or pre-printed postage, on an envelope, postcard, or postal card to commemorate a postal or philatelic event. There are official and private cachets. They commemorate everything from the first flight...
s were added to their enclosures which were then returned to the senders. These souvenir philatelic cover
Philatelic cover
A philatelic cover is an envelope or post card prepared with a stamp and address and sent through the mail delivery system for the purpose of creating a collectible item. Stamp collectors began to send mail to each other and to themselves early on, and philatelic mail is known from the late 19th...
s are readily available at low cost.

CAPT George J. Dufek
George J. Dufek
George John Dufek was an American naval officer, naval aviator, and Arctic expert. He served in World War II and the Korean War and in the 1940s and 1950s spent much of his career in the Antarctic, first with Admiral Byrd and later as supervisor of U.S. programs in the South Polar regions...
, USN, Commanding.