The Foudre was a French seaplane carrier, the first in history. Her development followed the invention of the seaplane
Seaplane
A seaplane is a fixed-wing aircraft capable of taking off and landing on water. Seaplanes that can also take off and land on airfields are a subclass called amphibian aircraft...
in 1910 with the French Le Canard.

She was then modified as repair ship in 1907, as a minelayer in 1910, as a seaplane carrier in 1911 (depot, transport, and launch by crane), and seaplane carrier with lift-off platform in 1913. She was initially converted to carry torpedo-carrying planes under hangars on the main deck, from where they were lowered on the sea with a crane.

On November 29, 1911, a Navy airbase was established at Fréjus Saint-Raphaël
Fréjus
Fréjus is a commune in the Var department in the Provence-Alpes-Côte d'Azur region in southeastern France.It neighbours Saint-Raphaël, effectively forming one town...
, and the torpedo boat tender Foudre was sent to the arsenal in Toulon
Toulon
Toulon is a town in southern France and a large military harbor on the Mediterranean coast, with a major French naval base. Located in the Provence-Alpes-Côte-d'Azur region, Toulon is the capital of the Var department in the former province of Provence....
to be converted as a seaplane tender. The ship was fit out in a totally new way: a flat surface would be installed at the bow for the seaplane to take off, the seaplane would land on the water once its mission finished, and it would be craned onboard for stowing.

A float-equipped Canard Voisin
Canard Voisin
The Voison Canard was an aircraft developed by Voisin brothers in 1910, named Canard after its duck-like shape. It was a successful land-based aircraft, that with the addition of floats became one of the first seaplanes of the French Navy....
seaplane was bought by the Navy for this purpose in December 1911. The Foudre would be stationed at Fréjus, working as a seaplane tender, allowing for stowage, repair and supply of the seaplanes. The ship was armed on April 15th, 1912, and trials with the Canard Voisin then started.

On May 1st 1912, the Navy Ministry purchased several more seaplanes, a monoplane Breguet with a single float, a Nieuport
Nieuport
Nieuport, later Nieuport-Delage, was a French aeroplane company that primarily built racing aircraft before World War I and fighter aircraft during World War I and between the wars.-Beginnings:...
with double float, and a converted Farman biplane.

Experiments at sea started with the Foudre in July 1912 during tactical exercises in the Mediterranean. The Canard Voisin, and a new foldable Nieuport were used. During the exercises, in which a wargame simulated the fight of two rival navies, the use of the Nieuport allowed to uncover a surprise attack by the "adversary". During the summer 1912 many flights of the Canard Voisin from the Foudre were accomplished in the bay of Saint-Raphaël
Saint-Raphaël, Var
Saint-Raphaël is a commune in the Var department in the Provence-Alpes-Côte d'Azur region in southeastern France.Immediately to the west of Saint-Raphaël lies another, older, town called Fréjus, and together they form an urban agglomeration known as Fréjus Saint-Raphaël...
.

By the middle of 1913, the Navy had 11 seaplane pilots. The Foudre was again used in large-scale naval exercises. One of its planes, a Nieuport used for observations, foiled a "surprise attack" by a group of warships. Five more seaplanes were ordered following these exercises. 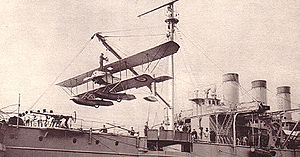 In November 1913, a 10 meter lift-off platform was installed on La Foudre, with the objective of using it for a Caudron G.3
Caudron G.3
The Caudron G.3 was a single-engined French biplane built by Caudron, widely used in World War I as a reconnaissance aircraft and trainer. In comparison to its competitors, it had a better rate of climb and it was considered especially suitable in mountainous terrain.-Development:The Caudron G.3...
seaplane. The plane successfully lifted off from the ship on May 8, 1914. At the beginning of the war, the platform was dismantled, and further experiments postponed to a later date.

During World War I
World War I
World War I , which was predominantly called the World War or the Great War from its occurrence until 1939, and the First World War or World War I thereafter, was a major war centred in Europe that began on 28 July 1914 and lasted until 11 November 1918...
her roles were numerous, ranging from submarine
Submarine
A submarine is a watercraft capable of independent operation below the surface of the water. It differs from a submersible, which has more limited underwater capability...
tender to seaplane/aircraft transport, and headquarters ship in 1916. She was employed as an aviation school ship after the war.