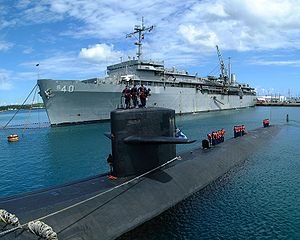 A submarine tender is a type of ship
Ship
Since the end of the age of sail a ship has been any large buoyant marine vessel. Ships are generally distinguished from boats based on size and cargo or passenger capacity. Ships are used on lakes, seas, and rivers for a variety of activities, such as the transport of people or goods, fishing,...
that supplies and supports submarine
Submarine
A submarine is a watercraft capable of independent operation below the surface of the water. It differs from a submersible, which has more limited underwater capability...
s.

Submarines are small compared to most oceangoing vessels, and generally do not have the ability to carry large amounts of food, fuel, torpedo
Torpedo
The modern torpedo is a self-propelled missile weapon with an explosive warhead, launched above or below the water surface, propelled underwater towards a target, and designed to detonate either on contact with it or in proximity to it.The term torpedo was originally employed for...
es, and other supplies, nor to carry a full array of maintenance equipment and personnel. The tender carries all these, and either meets up with the submarines at sea to replenish them or provides these services while docked at a port near the area where the submarines are operating. In some navies, the tenders were equipped with workshops for maintenance, and as floating dormitories with relief crews.

Unable to operate conventional surface tenders during World War II
World War II
World War II, or the Second World War , was a global conflict lasting from 1939 to 1945, involving most of the world's nations—including all of the great powers—eventually forming two opposing military alliances: the Allies and the Axis...
, the German Navy used Type XIV submarines
German Type XIV submarine
The Type XIV U-boat was a modification of the Type IXD, designed to resupply other U-boats. They were nicknamed "Milchkuh/Milchkühe " . They had no torpedo tubes or deck guns, only anti-aircraft guns. Due to its large size, the Type XIV could resupply other boats with 400 tons of fuel, four...
(milchcows) as tenders instead.