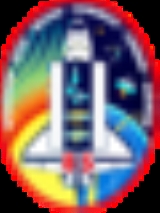 Encyclopedia
STS-86 was a Space Shuttle
Space Shuttle
The Space Shuttle was a manned orbital rocket and spacecraft system operated by NASA on 135 missions from 1981 to 2011. The system combined rocket launch, orbital spacecraft, and re-entry spaceplane with modular add-ons...
Atlantis
Space Shuttle Atlantis
The Space Shuttle Atlantis is a retired Space Shuttle orbiter in the Space Shuttle fleet belonging to the National Aeronautics and Space Administration , the spaceflight and space exploration agency of the United States...
mission to the Mir
Mir
Mir was a space station operated in low Earth orbit from 1986 to 2001, at first by the Soviet Union and then by Russia. Assembled in orbit from 1986 to 1996, Mir was the first modular space station and had a greater mass than that of any previous spacecraft, holding the record for the...
space station. This was the last Atlantis mission before it was taken out of service temporarily for maintenance and upgrades, including the glass cockpit
Glass cockpit
A glass cockpit is an aircraft cockpit that features electronic instrument displays, typically large LCD screens, as opposed to the traditional style of analog dials and gauges...
.

Wendy B. Lawrence
Wendy B. Lawrence
Wendy Barrien Lawrence is a retired U.S. Navy Captain, former helicopter pilot, an engineer, and a former NASA astronaut. She was the first female graduate of the US Naval Academy to fly in space and she has also visited the Russian Space Station Mir. She was a mission specialist on STS-114, the...
was scheduled to replace C. Michael Foale onboard Mir. However, due to concerns about the minimum size restrictions of the Russian MIR Orlan EVA Spacesuit
Orlan space suits
thumb|right|270px|Cosmonaut [[Maksim Surayev]] next to two Orlan-MK modelsAn Orlan space suit |sea eagle]]) is a series of semi-rigid one-piece space suit models designed and built by NPP Zvezda. They have been used for spacewalks in the Russian space program, the successor to the Soviet space...
, she was replaced by her backup, David Wolf. Wolf was originally scheduled to fly on the STS-89 mission to Mir and join the Mir 24 crew.

Highlights of the 10 day mission include five days of docked operations between Atlantis and Mir and the exchange of crew members Foale and Wolf to continue a permanent American presence of the Russia complex. A spacewalk is scheduled to retrieve the four Mir Environmental Effects Payloads which were attached to the Mir's docking module by Linda Godwin and Rich Clifford during STS-76 to characterize the environment surrounding the Mir space station. Atlantis will carry the SPACEHAB double module to support the transfer of logistics and supplies for Mir and the return of experiment hardware and specimens to Earth.

The seventh Mir docking mission continued the presence of a U.S. astronaut on the Russian space station
Space station
A space station is a spacecraft capable of supporting a crew which is designed to remain in space for an extended period of time, and to which other spacecraft can dock. A space station is distinguished from other spacecraft used for human spaceflight by its lack of major propulsion or landing...
with the transfer of physician David A. Wolf to Mir. Wolf became the sixth U.S. astronaut in succession to live on Mir to continue Phase 1B of the NASA/Russian Space Agency cooperative effort.

Foale returned to Earth after spending 145 days in space, 134 of them aboard Mir. His estimated mileage logged was 58 million miles (93 million kilometers), making his the second longest U.S. space flight, behind Shannon Lucid's record of 188 days. His stay was marred by a collision 25 June between a Progress resupply vehicle and the station's Spektr module, damaging a radiator and one of four solar arrays on Spektr. The mishap occurred while Mir 23 Commander Vasili Tsibliev was guiding the Progress capsule to a manual docking and depressurized the station. The crew sealed the hatch to the leaking Spektr module, leaving inside Foale's personal effects and several NASA science experiments, and repressurized the remaining modules.

An internal space walk by Tsibliev and Mir 23 Flight Engineer Aleksandr Lazutkin
Aleksandr Lazutkin
Aleksandr Ivanovich Lazutkin is a Russian cosmonaut.He was selected as cosmonaut on March 3, 1992. His first spaceflight was Soyuz TM-25, on which he was the flight engineer.He is married and has two children....
was planned to reconnect power cables to the three undamaged solar arrays, but during a routine medical exam 13 July Tsibliev was found to have an irregular heartbeat. Foale then began training for the space walk, but during one of the training exercises a power cable was inadvertently disconnected, leaving the station without power. On 21 July, it was announced that the internal space walk would not be conducted by the Mir 23 crew but their successors on Mir 24. On 30 July, NASA announced that Wendy Lawrence, originally assigned to succeed Foale on Mir, was being replaced by Wolf. The change was deemed necessary to allow Wolf to act as a backup crew member for the space walks planned over the next several months to repair Spektr. Unlike Wolf, Lawrence could not fit in the Orlan suit that is used for Russian space walks and she did not undergo space walk training.
Following their arrival at the station 7 August, Mir 24 Commander Anatoly Solovyev
Anatoly Solovyev
Anatoly Yakovlevich Solovyev is a former Soviet pilot, cosmonaut, and Colonel. Solovyev holds the world record on the number of spacewalks performed , and accumulated time spent spacewalking .- Family :...
and Flight Engineer Pavel Vinogradov conducted the internal space walk inside the depressurized Spektr module 22 August, reconnecting 11 power cables from the Spektr's solar arrays to a new custom-made hatch for the Spektr. During the space walk, Foale remained inside the Soyuz capsule attached to Mir, in constant communication with the cosmonauts as well as ground controllers.

On 5 September, Foale and Solovyev conducted a six-hour external extravehicular activity to survey damage outside Spektr and to try and pinpoint where the breach of the module's hull occurred. Two undamaged arrays were manually repositioned to better gather solar energy, and a radiation device left previously by Jerry Linenger was retrieved.

The docking of Atlantis and Mir took place at 3:58 pm EDT, 27 September, with the two mission commanders opening the spacecraft hatches at 5:45 pm Wolf officially joined the Mir 24 at noon EDT, 28 September. At the same time, Foale became a member of the STS-86 crew and began moving his personal belongings back into Atlantis. Wolf will be replaced by the seventh and last U.S. astronaut to transfer to Mir, Andrew S. W. Thomas, when the orbiter Endeavour
Space Shuttle Endeavour
Space Shuttle Endeavour is one of the retired orbiters of the Space Shuttle program of NASA, the space agency of the United States. Endeavour was the fifth and final spaceworthy NASA space shuttle to be built, constructed as a replacement for Challenger...
docks with the Russian space station during the STS-89
STS-89
STS-89 was a space shuttle mission to the Mir space station flown by Space Shuttle Endeavour, and launched from Kennedy Space Center, Florida on 22 January 1998.-Crew:-Crew notes:...
mission in January 1998.

First joint U.S.-Russian extravehicular activity during a Shuttle mission, which was also the 39th in the Space Shuttle program, was conducted by Titov and Parazynski. During the five-hour, one-minute space walk on 1 October, the pair affixed a 121 pound (55 kilograms (121.3 lb)) Solar Array Cap to the docking module for future use by Mir crew members to seal off the suspected leak in Spektr's hull. Parazynski and Titov also retrieved four Mir Environmental Effects Payloads (MEEPS) from the outside of Mir and tested several components of the Simplified Aid for EVA Rescue (SAFER) jet packs. The space walk began at 1:29 pm EDT and ended at 6:30 pm
During the six days of docked operations, the joint Mir 24 and STS-86 crews transferred more than four tons of material from the SPACEHAB Double Module to Mir, including approximately 771 kilograms (1,699.8 lb) of water, experiment hardware for International Space Station Risk Mitigation experiments to monitor the Mir for crew health and safety, a gyrodyne, batteries, three air pressurization units with breathing air, an attitude control computer and many other logistics items. The new motion control computer replaced one that had experienced problems in recent months. The crew also moved experiment samples and hardware and an old Elektron oxygen generator to Atlantis for return to Earth. Undocking took place at 1:28 pm EDT, 3 October. After undocking, Atlantis performed a 46 minute flyaround visual inspection of Mir. During this maneuver, Solovyev and Vinogradov opened a pressure regulation valve to allow air into the Spektr module to see if STS-89 crew members could detect seepage or debris particles that could indicate the location of the breach in the damaged module's hull.