Encyclopedia
An Orlan space suit is a series of semi-rigid one-piece space suit
Space suit
A space suit is a garment worn to keep an astronaut alive in the harsh environment of outer space. Space suits are often worn inside spacecraft as a safety precaution in case of loss of cabin pressure, and are necessary for extra-vehicular activity , work done outside spacecraft...
models designed and built by NPP Zvezda
NPP Zvezda
Research & Development Production Enterprise Zvezda, or R&D PE Zvezda is a Russian manufacturer of life-support systems for high-altitude flight and human spaceflight. Its products include space suits, ejector seats, aircraft escape slides, lifejackets and fire extinguishers...
. They have been used for spacewalks
Extra-vehicular activity
Extra-vehicular activity is work done by an astronaut away from the Earth, and outside of a spacecraft. The term most commonly applies to an EVA made outside a craft orbiting Earth , but also applies to an EVA made on the surface of the Moon...
(EVAs) in the Russian space program
Russian Federal Space Agency
The Russian Federal Space Agency , commonly called Roscosmos and abbreviated as FKA and RKA , is the government agency responsible for the Russian space science program and general aerospace research. It was previously the Russian Aviation and Space Agency .Headquarters of Roscosmos are located...
, the successor to the Soviet space program
Soviet space program
The Soviet space program is the rocketry and space exploration programs conducted by the former Union of Soviet Socialist Republics from the 1930s until its dissolution in 1991...
, and by space programs of other countries, including NASA
NASA
The National Aeronautics and Space Administration is the agency of the United States government that is responsible for the nation's civilian space program and for aeronautics and aerospace research...
. A variant of the Orlan Spacesuit, with improvements, is used by the Chinese Space Program
Chinese space program
The space program of the People's Republic of China is directed by the China National Space Administration . Its technological roots can be traced back to the late 1950s, when the People's Republic began a rudimentary ballistic missile program in response to perceived American threats...

The first spacewalk using an Orlan suit took place on December 20, 1977, on the Soviet
Soviet Union
The Soviet Union , officially the Union of Soviet Socialist Republics , was a constitutionally socialist state that existed in Eurasia between 1922 and 1991....
space station
Space station
A space station is a spacecraft capable of supporting a crew which is designed to remain in space for an extended period of time, and to which other spacecraft can dock. A space station is distinguished from other spacecraft used for human spaceflight by its lack of major propulsion or landing...
Salyut 6
Salyut 6
Salyut 6 , DOS-5, was a Soviet orbital space station, the eighth flown as part of the Salyut programme. Launched on 29 September 1977 by a Proton rocket, the station was the first of the 'second-generation' type of space station. Salyut 6 possessed several revolutionary advances over the earlier...
, during the Soyuz 26
Soyuz 26
Soyuz 26 was Soviet manned mission, used to launch the crew of Salyut 6 EO-1, the first long duration crew on the space station Salyut 6.The Soyuz spacecraft was launched on December 10, 1977, and docked with the space station the next day...
mission. Yuri Romanenko
Yuri Romanenko
Yury Viktorovich Romanenko is a former Soviet cosmonaut, twice Hero of the Soviet Union . Over his career, Yury Romanenko spent a total of 430 days 20 hours 21 minutes 30 seconds in space and 18 hours in space walks. In 1987 he was a resident of the Mir space station, launching on Soyuz TM-2 and...
and Georgi Grechko
Georgi Grechko
Georgy Mikhaylovich Grechko is a retired Soviet cosmonaut who flew on several space flights among which Soyuz 17, Soyuz 26, and Soyuz T-14.Grechko graduated from the Leningrad Institute of Mechanics with a doctorate in mathematics. He was a member of Communist Party of Soviet Union...
tested the Orlan-D space suit. The Orlan-DM was used for the first time on August 2, 1985, by the cosmonauts Vladimir Dzhanibekov
Vladimir Dzhanibekov
Vladimir Aleksandrovich Dzhanibekov is a former cosmonaut who made five flights.He was born in the remote area of Iskandar in Tashkent Province, Uzbekistan. He changed his surname from Krysin when he married to honor his wife's family, which was noble kin of the descendants of the medieval Kazakh...
and Viktor Savinykh
Viktor Savinykh
Viktor Petrovich Savinykh was born in Berezkiny, Kirov Oblast, Russian SFSR on March 7, 1940. Married with one child. Selected as a cosmonaut on December 1, 1978. Retired on February 9, 1989.Flew as Flight Engineer on Soyuz T-4, Soyuz T-13 and Soyuz TM-5....
of Salyut 7
Salyut 7
Salyut 7 was a space station in low Earth orbit from April 1982 to February 1991. It was first manned in May 1982 with two crew via Soyuz T-5, and last visited in June 1986, by Soyuz T-15. Various crew and modules were used over its lifetime, including a total of 12 manned and 15 unmanned launches...
.

The Orlan space suits were used for spacewalks on the Salyut stations, but for Mir
Mir
Mir was a space station operated in low Earth orbit from 1986 to 2001, at first by the Soviet Union and then by Russia. Assembled in orbit from 1986 to 1996, Mir was the first modular space station and had a greater mass than that of any previous spacecraft, holding the record for the...
they were replaced by the Orlan-DMA and Orlan-M suits: The Orlan-DMA was used for the first time in November, 1988, by the cosmonaut Musa Manarov from the Mir space station. The Orlan-M continued in use on Mir from 1997 until the end of the station's operational life, and is now used on the International Space Station
International Space Station
The International Space Station is a habitable, artificial satellite in low Earth orbit. The ISS follows the Salyut, Almaz, Cosmos, Skylab, and Mir space stations, as the 11th space station launched, not including the Genesis I and II prototypes...
. Orlan space suits have been used by Russian, American, European and Chinese astronauts. China calls their Orlan-M suits .

On February 3, 2006, a retired Orlan fitted with a radio transmitter, dubbed SuitSat-1, was launched into orbit from the International Space Station.

In June, 2009, the latest computerized Orlan-MK version was tested during a five-hour spacewalk to install new equipment on the International Space Station. The new suit's main improvement is the replacement of the radio-telemetry equipment in the Portable Life Support System backpack which contains a mini-computer. This computer processes data from the spacesuit's various systems and provides a malfunction warning. It then outlines a contingency plan which is displayed on an LCD screen on the right chest part of the spacesuit. 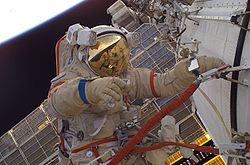 The Orlan space suit has gone through several models. Space-rated designations include the Orlan-D, Orlan-DM, Orlan-DMA, and Orlan-M models; the Orlan-GN, Orlan-T, and Orlan-V are used in training and are used underwater. The latest model, called Orlan-MK, was tested during a spacewalk in June, 2009. The original Orlan suit, with a two and a half hour operation time, was designed as an orbital suit for use on the Soviet Lunar programme
Soviet Moonshot
The Soviet manned lunar programs were a series of programs pursued by the Soviet Union to land a man on the Moon in competition with the United States Apollo program to achieve the same goal set publicly by President John F. Kennedy on May 25, 1961...
, although it was abandoned in favour of a model with a greater operating capacity. The Orlan-D expanded the operation time to three hours; the Orlan-M to nine hours.

The Orlan space suit is semi-rigid, that is, it has a solid torso and helmet but flexible arms. It was designed with a rear hatch entry through the attached backpack that allows it to be donned relatively quickly (taking approximately five minutes). The first Orlan suits were attached to the spacecraft by an umbilical
Umbilical cord
In placental mammals, the umbilical cord is the connecting cord from the developing embryo or fetus to the placenta...
tether that supplied power and communications links. The Orlan-DM, and all models since, were designed to be self-sustaining.

Orlan suits are used in the Yuri Gagarin Cosmonauts Training Center
Yuri Gagarin Cosmonauts Training Center
The Yu. A. Gagarin State Scientific Research-and-Testing Cosmonaut Training Center is a Russian training facility responsible for training cosmonauts for their space missions...
in Star City, Moscow
Moscow
Moscow is the capital, the most populous city, and the most populous federal subject of Russia. The city is a major political, economic, cultural, scientific, religious, financial, educational, and transportation centre of Russia and the continent...
: the Orlan-GN for water immersion training, the Orlan-T for airlock
Airlock
An airlock is a device which permits the passage of people and objects between a pressure vessel and its surroundings while minimizing the change of pressure in the vessel and loss of air from it...
procedure training, and the Orlan-V for low gravity
Weightlessness
Weightlessness is the condition that exists for an object or person when they experience little or no acceleration except the acceleration that defines their inertial trajectory, or the trajectory of pure free-fall...
flight training.