Encyclopedia
STS-79 was a Space Shuttle
Space Shuttle
The Space Shuttle was a manned orbital rocket and spacecraft system operated by NASA on 135 missions from 1981 to 2011. The system combined rocket launch, orbital spacecraft, and re-entry spaceplane with modular add-ons...
Atlantis
Space Shuttle Atlantis
The Space Shuttle Atlantis is a retired Space Shuttle orbiter in the Space Shuttle fleet belonging to the National Aeronautics and Space Administration , the spaceflight and space exploration agency of the United States...
mission to the Mir
Mir
Mir was a space station operated in low Earth orbit from 1986 to 2001, at first by the Soviet Union and then by Russia. Assembled in orbit from 1986 to 1996, Mir was the first modular space station and had a greater mass than that of any previous spacecraft, holding the record for the...
space station. It was the first shuttle mission to dock with Mir once it was fully assembled. 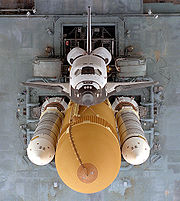 STS-79 was the first shuttle mission to the fully completed Mir space station in its final configuration, following the arrival of the Priroda
Priroda
The Priroda module was the seventh and final module of the Mir Space Station. Its primary purpose was to conduct Earth resource experiments through remote sensing and to develop and verify remote sensing methods...
module. This spaceflight was highlighted by return to Earth of the American astronaut Shannon Lucid after 188 days in space, the first American crewmember exchange aboard the Russian Space Station Mir, and fourth Shuttle-Mir docking. Lucid's long-duration spaceflight set a new American record, as well as worldwide spaceflight record for a woman astronaut. She embarked to Mir 22 March on the STS-76
STS-76
STS-76 was NASA's 76th Space Shuttle mission, and the 16th mission for Atlantis. STS-76 launched on 22 March 1996 at 3:13 am EST from Kennedy Space Center launch pad 39B...
mission. Succeeding her on Mir for an approximately four-month stay was John Blaha, who returned in January 1997 with the STS-81 crew. The American astronaut Jerry Linenger replaced him.

STS-79 also marked second flight of SPACEHAB module in support of Shuttle-Mir activities and first flight of SPACEHAB Double Module configuration. The forward portion of the double module housed experiments conducted by the crew before, during and after the Atlantis was docked to the Russian space station. The aft portion of the double module housed the logistics equipment to be transferred to the Russian space station. Logistics supplies included food, clothing, experiment, supplies, and spare equipment for the Mir.

About 907 kilograms (1,999.6 lb) of experiment samples and equipment transferred from Mir to Atlantis; total logistical transfer to and from station of more than 2722 kilograms (6,001 lb) was most extensive to date. During her approximately six-month stay on Mir, Lucid conducted research in following fields: advanced technology, Earth sciences, fundamental biology, human life sciences, microgravity research and space sciences. Specific experiments included: Environmental Radiation Measurements to ascertain ionizing radiation levels aboard Mir; Greenhouse-Integrated Plant Experiments, to study effect of microgravity on plants, specifically dwarf wheat; and Assessment of Humoral Immune Function During Long-Duration Space Flight, to gather data on effect of long-term spaceflight on the human immune system and involving collection of blood serum and saliva samples. Some research conducted in newest and final Mir module, Priroda, which arrived at station during Lucid’s stay.

As with all Shuttle-Mir flights, risk-mitigation experiments were conducted to help reduce development risk for the International Space Station. Flying for first time was the Active Rack Isolation System (ARIS), an experiment rack designed to cushion payloads from vibration and other disturbances.