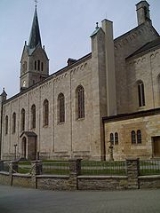 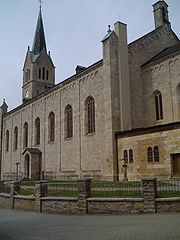 Medebach is a town in the Hochsauerland
Hochsauerland
Hochsauerlandkreis is a Kreis in the east of North Rhine-Westphalia, Germany. Neighboring districts are Soest, Paderborn, Höxter, Waldeck-Frankenberg, Siegen-Wittgenstein, Olpe, Märkischer Kreis.- History :...
district, in North Rhine-Westphalia
North Rhine-Westphalia
North Rhine-Westphalia is the most populous state of Germany, with four of the country's ten largest cities. The state was formed in 1946 as a merger of the northern Rhineland and Westphalia, both formerly part of Prussia. Its capital is Düsseldorf. The state is currently run by a coalition of the...
, Germany
Germany
Germany , officially the Federal Republic of Germany , is a federal parliamentary republic in Europe. The country consists of 16 states while the capital and largest city is Berlin. Germany covers an area of 357,021 km2 and has a largely temperate seasonal climate...
.

Medebach is situated approx. 15 km east of Winterberg
Winterberg
Winterberg is a town in the Hochsauerland district of North Rhine-Westphalia, Germany and a major winter sport resort of the Wintersport Arena Sauerland.-Geography:...
, 17 km south-west of Korbach
Korbach
Korbach is the district seat of Waldeck-Frankenberg in northern Hesse, Germany. It is over a thousand years old and a former Hanseatic town. It is located on the German Framework Road.- Geography and geology :...
and 45 km north of Marburg
Marburg
Marburg is a city in the state of Hesse, Germany, on the River Lahn. It is the main town of the Marburg-Biedenkopf district and its population, as of March 2010, was 79,911.- Founding and early history :...
.

Medebach consists of the following districts:

Medebach is twinned
Town twinning
Twin towns and sister cities are two of many terms used to describe the cooperative agreements between towns, cities, and even counties in geographically and politically distinct areas to promote cultural and commercial ties.- Terminology :...
with

Medebach and its district Oberschledorn entered the international news in September 2007 during the 2007 bomb plot in Germany, when three Islamic terrorists, two Germans and a Turk, were arrested there. They had received training in Pakistan
Pakistan
Pakistan , officially the Islamic Republic of Pakistan is a sovereign state in South Asia. It has a coastline along the Arabian Sea and the Gulf of Oman in the south and is bordered by Afghanistan and Iran in the west, India in the east and China in the far northeast. In the north, Tajikistan...
and were about to build bombs from hydrogen peroxide
Hydrogen peroxide
Hydrogen peroxide is the simplest peroxide and an oxidizer. Hydrogen peroxide is a clear liquid, slightly more viscous than water. In dilute solution, it appears colorless. With its oxidizing properties, hydrogen peroxide is often used as a bleach or cleaning agent...
in a rented holiday flat.