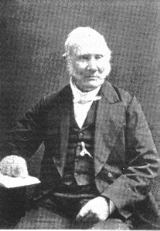 Encyclopedia
The Reverend Dr Robert Stirling (25 October 1790 – 6 June 1878) was a Scottish
Scotland
Scotland is a country that is part of the United Kingdom. Occupying the northern third of the island of Great Britain, it shares a border with England to the south and is bounded by the North Sea to the east, the Atlantic Ocean to the north and west, and the North Channel and Irish Sea to the...
clergy
Clergy
Clergy is the generic term used to describe the formal religious leadership within a given religion. A clergyman, churchman or cleric is a member of the clergy, especially one who is a priest, preacher, pastor, or other religious professional....
man, and inventor of the stirling engine
Stirling engine
A Stirling engine is a heat engine operating by cyclic compression and expansion of air or other gas, the working fluid, at different temperature levels such that there is a net conversion of heat energy to mechanical work....
.

Stirling was born at Cloag Farm near Methven
Methven, Perth and Kinross
Methven is a large village in the Scottish region of Perth and Kinross, on the A85 road due west of the town of Perth. Methven is close to another Perthshire village, Almondbank...
, Perthshire
Perthshire
Perthshire, officially the County of Perth , is a registration county in central Scotland. It extends from Strathmore in the east, to the Pass of Drumochter in the north, Rannoch Moor and Ben Lui in the west, and Aberfoyle in the south...
, the third of eight children. He inherited his father's interest in engineering
Engineering
Engineering is the discipline, art, skill and profession of acquiring and applying scientific, mathematical, economic, social, and practical knowledge, in order to design and build structures, machines, devices, systems, materials and processes that safely realize improvements to the lives of...
, but studied divinity at the University of Edinburgh and the University of Glasgow becoming a minister of the Church of Scotland
Church of Scotland
The Church of Scotland, known informally by its Scots language name, the Kirk, is a Presbyterian church, decisively shaped by the Scottish Reformation....
as second charge of the Laigh Kirk of Kilmarnock
Kilmarnock
Kilmarnock is a large burgh in East Ayrshire, Scotland, with a population of 44,734. It is the second largest town in Ayrshire. The River Irvine runs through its eastern section, and the Kilmarnock Water passes through it, giving rise to the name 'Bank Street'...
in 1816.

He invented what he called the Heat Economiser (now generally known as the regenerator
Regenerative heat exchanger
A regenerative heat exchanger, or more commonly a regenerator, is a type of heat exchanger where the flow through the heat exchanger is cyclical and periodically changes direction. It is similar to a countercurrent heat exchanger. However, a regenerator mixes the two fluid flows while a...
), a device for improving the thermal/fuel efficiency of a variety of industrial processes, obtaining a patent
Patent
A patent is a form of intellectual property. It consists of a set of exclusive rights granted by a sovereign state to an inventor or their assignee for a limited period of time in exchange for the public disclosure of an invention....
for the economiser and an engine incorporating it in 1816. In 1818 he built the first practical version of his engine, used to pump water from a quarry
Quarry
A quarry is a type of open-pit mine from which rock or minerals are extracted. Quarries are generally used for extracting building materials, such as dimension stone, construction aggregate, riprap, sand, and gravel. They are often collocated with concrete and asphalt plants due to the requirement...
.

The theoretical basis of Stirling's engine, the Stirling cycle
Stirling cycle
The Stirling cycle is a thermodynamic cycle that describes the general class of Stirling devices. This includes the original Stirling engine that was invented, developed and patented in 1816 by Reverend Dr...
, would not be fully understood until the work of Sadi Carnot
Nicolas Léonard Sadi Carnot
Nicolas Léonard Sadi Carnot was a French military engineer who, in his 1824 Reflections on the Motive Power of Fire, gave the first successful theoretical account of heat engines, now known as the Carnot cycle, thereby laying the foundations of the second law of thermodynamics...
(1796–1832).

While in Kilmarnock, he collaborated with another inventor, Thomas Morton, who provided workshop facilities for Stirling's research. Both men were interested in astronomy
Astronomy
Astronomy is a natural science that deals with the study of celestial objects and phenomena that originate outside the atmosphere of Earth...
, and having learnt from Morton how to grind lenses
Lens (optics)
A lens is an optical device with perfect or approximate axial symmetry which transmits and refracts light, converging or diverging the beam. A simple lens consists of a single optical element...
, Stirling invented several optical instruments.

Robert, together with his brother James an engineer, took out several further patents for improvements to the air engine and in the 1840s James built a large air engine driving all the machinery at his Dundee Foundry Company.

In a letter of 1876, Robert Stirling acknowledged the importance of Henry Bessemer
Henry Bessemer
Sir Henry Bessemer was an English engineer, inventor, and businessman. Bessemer's name is chiefly known in connection with the Bessemer process for the manufacture of steel.-Anthony Bessemer:...
's new invention – the Bessemer process
Bessemer process
The Bessemer process was the first inexpensive industrial process for the mass-production of steel from molten pig iron. The process is named after its inventor, Henry Bessemer, who took out a patent on the process in 1855. The process was independently discovered in 1851 by William Kelly...
for the manufacture of steel
Steel
Steel is an alloy that consists mostly of iron and has a carbon content between 0.2% and 2.1% by weight, depending on the grade. Carbon is the most common alloying material for iron, but various other alloying elements are used, such as manganese, chromium, vanadium, and tungsten...
– expressing a hope that the new steel would improve the performance of air engines.