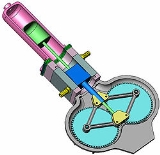 Overview
A Stirling engine is a heat engine
Heat engine
In thermodynamics, a heat engine is a system that performs the conversion of heat or thermal energy to mechanical work. It does this by bringing a working substance from a high temperature state to a lower temperature state. A heat "source" generates thermal energy that brings the working substance...
operating by cyclic compression and expansion of air or other gas, the working fluid
Working fluid
A working fluid is a pressurized gas or liquid that actuates a machine. Examples include steam in a steam engine, air in a hot air engine and hydraulic fluid in a hydraulic motor or hydraulic cylinder...
, at different temperature levels such that there is a net conversion of heat
Heat
In physics and thermodynamics, heat is energy transferred from one body, region, or thermodynamic system to another due to thermal contact or thermal radiation when the systems are at different temperatures. It is often described as one of the fundamental processes of energy transfer between...
energy to mechanical work.

In striling cycle we got isothermal compresion,expansion,heat adiition and rejection can any body tell me the how much initail value is taken for temp...
More

Which solution are used to strilling engine