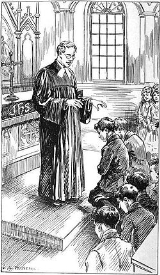 Encyclopedia
A rite is an established, ceremonious
Ceremony
A ceremony is an event of ritual significance, performed on a special occasion. The word may be of Etruscan origin.-Ceremonial occasions:A ceremony may mark a rite of passage in a human life, marking the significance of, for example:* birth...
, usually religious act. Rites in this sense fall into three major categories: 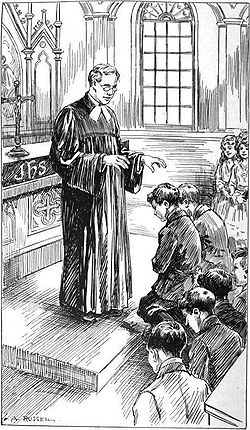 Within Christianity
Christianity
Christianity is a monotheistic religion based on the life and teachings of Jesus as presented in canonical gospels and other New Testament writings...
, "rite" often refers to what is also called a sacrament
Sacrament
A sacrament is a sacred rite recognized as of particular importance and significance. There are various views on the existence and meaning of such rites.-General definitions and terms:...
or to the ceremonies associated with the sacraments. In Roman Catholicism, for example, the sacrament of Anointing of the Sick
Anointing of the Sick
Anointing of the Sick, known also by other names, is distinguished from other forms of religious anointing or "unction" in that it is intended, as its name indicates, for the benefit of a sick person...
is one of the three that used to be called "the last rites," because it was administered to someone who was dying. The other two were Penance and Eucharist
Eucharist
The Eucharist , also called Holy Communion, the Sacrament of the Altar, the Blessed Sacrament, the Lord's Supper, and other names, is a Christian sacrament or ordinance...
(administered as Viaticum
Viaticum
Viaticum is a term used especially in the Roman Catholic Church for the Eucharist administered, with or without anointing of the sick, to a person who is dying, and is thus a part of the last rites...
in the case of a dying person). Since the Second Vatican Council
Second Vatican Council
The Second Vatican Council addressed relations between the Roman Catholic Church and the modern world. It was the twenty-first Ecumenical Council of the Catholic Church and the second to be held at St. Peter's Basilica in the Vatican. It opened under Pope John XXIII on 11 October 1962 and closed...
, Anointing of the Sick is administered to those who are seriously ill but not necessarily in immediate danger of death.