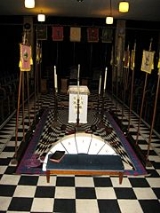 Overview
The York Rite or American Rite is one of several Rites of the worldwide fraternity known as Freemasonry
Freemasonry
Freemasonry is a fraternal organisation that arose from obscure origins in the late 16th to early 17th century. Freemasonry now exists in various forms all over the world, with a membership estimated at around six million, including approximately 150,000 under the jurisdictions of the Grand Lodge...
. A Rite is a series of progressive degrees that are conferred by various Masonic organizations or bodies, each of which operates under the control of its own central authority. The York Rite specifically is a collection of separate Masonic Bodies and associated Degrees that would otherwise operate independently.

Are your rite members Christian , and are York rite masons
More

Encyclopedia
The York Rite or American Rite is one of several Rites of the worldwide fraternity known as Freemasonry
Freemasonry
Freemasonry is a fraternal organisation that arose from obscure origins in the late 16th to early 17th century. Freemasonry now exists in various forms all over the world, with a membership estimated at around six million, including approximately 150,000 under the jurisdictions of the Grand Lodge...
. A Rite is a series of progressive degrees that are conferred by various Masonic organizations or bodies, each of which operates under the control of its own central authority. The York Rite specifically is a collection of separate Masonic Bodies and associated Degrees that would otherwise operate independently. The three primary bodies in the York Rite are the Chapter of Royal Arch Masons
Royal Arch Masonry
Royal Arch Masonry is the term used to denote the first part of the York Rite system of Masonic degrees. Royal Arch Masons meet as a Chapter, and the Chapter confers four degrees: Mark Master Mason, Past Master, Most Excellent Master, and Royal Arch Mason.-Chapter level:A Chapter is in many ways...
, Council of Royal & Select Masters or Council of Cryptic Masons, and the Knights Templar, each of which are governed independently but are all considered to be a part of the York Rite. There are also other organizations that are considered to be directly associated with the York Rite, or require York Rite membership to join such as the York Rite Sovereign College but in general the York Rite is considered to be made up of the aforementioned three. The Rite's name is derived from the city of York
York
York is a walled city, situated at the confluence of the Rivers Ouse and Foss in North Yorkshire, England. The city has a rich heritage and has provided the backdrop to major political events throughout much of its two millennia of existence...
, where, according to a Masonic legend, the first meetings of Masons in England took place, although only the lectures of the York Rite Sovereign College make reference to that legend.

The York Rite is one of the appendant
Masonic appendant bodies
The fraternity of Freemasonry, also known as "Free and Accepted Masons," is organized by private groups of members variously known in English as lodges, chapters, councils, commanderies, consistories, etc., which can be collectively referred to as Masonic bodies.The basic unit to which an...
bodies of Freemasonry that a Master Mason may join to further his knowledge of Freemasonry. But the York Rite is not found as a single system world wide, and outside of the York Rite there are often significant differences in ritual, as well as organization. However in most cases provided that the Grand Body in question regards the parent "Craft" jurisdiction as regular, each distinct Order has recognised fraternal inter-relations with the respective Grand Body within the York system.

Since the York Rite is actually a grouping of separate organizations joined in order, each body operates with relative autonomy. And though they are referred to as one rite it is common for individuals to be member of some bodies and not others. For example in many jurisdictions Cryptic Masonry can be skipped allowing the person to be a member of just the Royal Arch and Knights Templar. It is also common for non-Christians to join only the Royal Arch and Council of Royal & Select Masters as the Knights Templar require members to be of the Christian
Christian
A Christian is a person who adheres to Christianity, an Abrahamic, monotheistic religion based on the life and teachings of Jesus of Nazareth as recorded in the Canonical gospels and the letters of the New Testament...
faith. But no matter what the Royal Arch is always required and membership in that body must be kept in order to maintain membership in the other two bodies.

Details on the individual bodies are as follows:

Royal Arch Masonry is the first order a Master Mason joins in the York Rite. The Chapter works the following degrees:

Membership in the Council of Royal & Select Masters or the Council of Cryptic Masons is not required for membership in the Knights Templar in some jurisdictions, so it can be skipped. In others it is required. It is called Cryptic Masonry or the Cryptic Rite because a crypt
Crypt
In architecture, a crypt is a stone chamber or vault beneath the floor of a burial vault possibly containing sarcophagi, coffins or relics....
or underground room figures prominently in the degrees.

The Knights Templar is the final order joined in the York Rite. Unlike other Masonic bodies which only require a belief in a Supreme Being
God
God is the English name given to a singular being in theistic and deistic religions who is either the sole deity in monotheism, or a single deity in polytheism....
regardless of religion, membership in the Knights Templar is open only to Christian
Christianity
Christianity is a monotheistic religion based on the life and teachings of Jesus as presented in canonical gospels and other New Testament writings...
Masons who have completed their Royal Arch and in some jurisdictions their Cryptic Degrees. This body is modeled off of the historical Knights Templar
Knights Templar
The Poor Fellow-Soldiers of Christ and of the Temple of Solomon , commonly known as the Knights Templar, the Order of the Temple or simply as Templars, were among the most famous of the Western Christian military orders...
in hopes to carry on the spirit of their organization. Throughout history it has been claimed that Freemasonry itself was founded by the Knights Templar or that the Knights Templar took refuge in Freemasonry after their persecution. The Grand Encampment of the United States acknowledges the existence of these theories but states that there is no proof to justify such claims.

A local Knights Templar division is called a Commandery and operates under a state level Grand Commandery as well as The Grand Encampment of the United States. This is unique among Masonic bodies as most report to the state level alone. The Knights Templar confer three orders, and one passing order as opposed to the standard degree system found elsewhere in Freemasonry: 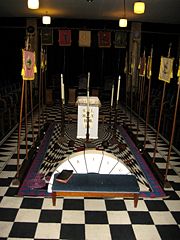 The Holy Royal Arch is affiliated to many different constitutions worldwide, many of which place different emphasis on the order.

The Cryptic Council confers the four degrees identified above. Candidates are required to be members of a Royal Arch Chapter and a Mark Master Mason.

Officially known as The United Religious, Military and Masonic Orders of the Temple and of St John of Jerusalem, Palestine, Rhodes and Malta, this order is colloquially known as the Knights Templar. Local bodies of Knights Templar are known as Preceptories; local bodies of Knights of St Paul are known as Chapters; local bodies of Knights of Malta are known as Priories; all operate under a Grand or Great Priory
Priory
A priory is a house of men or women under religious vows that is headed by a prior or prioress. Priories may be houses of mendicant friars or religious sisters , or monasteries of monks or nuns .The Benedictines and their offshoots , the Premonstratensians, and the...
, often with an intermediate level of Provincial Priories. Although some jurisdictions maintain a separate Great Priory of the Temple and Great Priory of Malta (as, for example, in England), the Grand Master and other officers of both Great Priories hold simultaneous equal office in both bodies. Three degrees are administered in this system:


Membership is by invitation and candidates are required to be Master Masons, holders of the degree of the Holy Royal Arch and to sign a declaration that they profess the Doctrine of the Holy and Undivided Trinity.