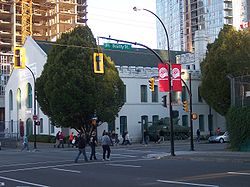 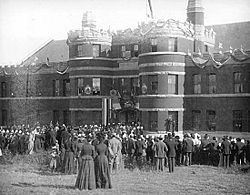 The Beatty Street Drill Hall is a Canadian Forces
Canadian Forces
The Canadian Forces , officially the Canadian Armed Forces , are the unified armed forces of Canada, as constituted by the National Defence Act, which states: "The Canadian Forces are the armed forces of Her Majesty raised by Canada and consist of one Service called the Canadian Armed Forces."...
armoury located at 620 Beatty Street in Vancouver
Vancouver
Vancouver is a coastal seaport city on the mainland of British Columbia, Canada. It is the hub of Greater Vancouver, which, with over 2.3 million residents, is the third most populous metropolitan area in the country,...
, British Columbia
British Columbia
British Columbia is the westernmost of Canada's provinces and is known for its natural beauty, as reflected in its Latin motto, Splendor sine occasu . Its name was chosen by Queen Victoria in 1858...
. It is the home of The British Columbia Regiment (Duke of Connaught's Own), an armoured reconnaissance
Reconnaissance
Reconnaissance is the military term for exploring beyond the area occupied by friendly forces to gain information about enemy forces or features of the environment....
reserve regiment, the oldest military unit in Vancouver, and the most senior militia in the province. The building was designed by architect David Ewart
David Ewart
David Ewart was a Canadian architect who served as Chief Dominion Architect from 1896 to 1914.As chief government architect he was responsible for many of the federal buildings constructed in this period...
and opened on 30 September 1901 by the Duke of Cornwall
Duke of Cornwall
The Duchy of Cornwall was the first duchy created in the peerage of England.The present Duke of Cornwall is The Prince of Wales, the eldest son of Queen Elizabeth II, the reigning British monarch .-History:...
(later King George V
George V of the United Kingdom
George V was King of the United Kingdom and the British Dominions, and Emperor of India, from 6 May 1910 through the First World War until his death in 1936....
). With two large castle-like turrets complete with battlements, and two tanks and a 64-pounder Gun
Artillery
Originally applied to any group of infantry primarily armed with projectile weapons, artillery has over time become limited in meaning to refer only to those engines of war that operate by projection of munitions far beyond the range of effect of personal weapons...
alongside the large white structure, Beatty Street Drill Hall has long been a Vancouver landmark and is listed as a class-A heritage building. The walls are three and a half feet thick, and the building rests on huge granite blocks. Limestone from Gabriola Island
Gabriola Island
Gabriola Island is one of the Gulf Islands in the Strait of Georgia, in British Columbia , Canada. Gabriola lies about east of Nanaimo on Vancouver Island, to which it is linked by ferry...
was used for the parapet and it features a rusticated stone trim. The Drill Hall includes a parade square, offices, and store rooms. It formerly contained a firing range and bowling alley. Originally, the Cambie Street Grounds
Larwill Park
Larwill Park, also known as the Cambie Street Grounds, is a former park and sporting field in what is now downtown Vancouver, British Columbia, Canada...
, now a parking lot across the street, was also used as part of the Regiment's training facilities.

The Regimental Museum of the BC Regiment (DCO) is housed in the building, with displays dating back to 1883, including uniforms, weapons, medals, Nazi regalia
Regalia
Regalia is Latin plurale tantum for the privileges and the insignia characteristic of a Sovereign.The word stems from the Latin substantivation of the adjective regalis, 'regal', itself from Rex, 'king'...
, and a large collection of photographs documenting the regiment's (and the Drill Hall's) history. The museum was established in 1982 and is open to the public Thursday afternoons. In addition to the BC Regiment (DCO), the 2290 British Columbia Regiment (Duke of Connaught's Own) Cadet Corps also parades at the armoury.