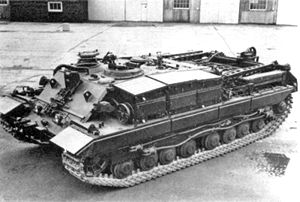 ARVs are normally built on the chassis
Chassis
A chassis consists of an internal framework that supports a man-made object. It is analogous to an animal's skeleton. An example of a chassis is the underpart of a motor vehicle, consisting of the frame with the wheels and machinery.- Vehicles :In the case of vehicles, the term chassis means the...
of a main battle tank
Main battle tank
A main battle tank , also known as a battle tank or universal tank, is a tank that fills the heavy direct fire role of many modern armies. They were originally conceived to replace the light, medium, heavy and super-heavy tanks. Development was spurred onwards in the Cold War with the development...
(MBT), but some are also constructed on the basis of other armoured fighting vehicle
Armoured fighting vehicle
An armoured fighting vehicle is a combat vehicle, protected by strong armour and armed with weapons. AFVs can be wheeled or tracked....
s, mostly armoured personnel carrier
Armoured personnel carrier
An armoured personnel carrier is an armoured fighting vehicle designed to transport infantry to the battlefield.APCs are usually armed with only a machine gun although variants carry recoilless rifles, anti-tank guided missiles , or mortars...
s (APCs). ARVs are usually built on the basis of a vehicle in the same class as they are supposed to recover; a tank-based ARV is used to recover tanks, while an APC-based one recovers APCs, but does not have the power to tow a much heavier tank.

The first true ARVs were introduced in World War II
World War II
World War II, or the Second World War , was a global conflict lasting from 1939 to 1945, involving most of the world's nations—including all of the great powers—eventually forming two opposing military alliances: the Allies and the Axis...
, often by converting obsolete or damaged tanks, usually by removing the turret
Gun turret
A gun turret is a weapon mount that protects the crew or mechanism of a projectile-firing weapon and at the same time lets the weapon be aimed and fired in many directions.The turret is also a rotating weapon platform...
and installing a heavy-duty winch
Winch
A winch is a mechanical device that is used to pull in or let out or otherwise adjust the "tension" of a rope or wire rope . In its simplest form it consists of a spool and attached hand crank. In larger forms, winches stand at the heart of machines as diverse as tow trucks, steam shovels and...
to free stuck vehicles, plus a variety of vehicle repair tool
Tool
A tool is a device that can be used to produce an item or achieve a task, but that is not consumed in the process. Informally the word is also used to describe a procedure or process with a specific purpose. Tools that are used in particular fields or activities may have different designations such...
s. Some were also purpose-built in factories, using an existing tank chassis with a hull superstructure to accommodate repair and recovery equipment. Many of the latter type of ARV had an A-frame
A-Frame
An A-frame is a basic structure designed to bear a load in a lightweight economical manner. The simplest form of an A-frame is two similarly sized beams, arranged in a 45-degree or greater angle, attached at the top...
or crane
Crane (machine)
A crane is a type of machine, generally equipped with a hoist, wire ropes or chains, and sheaves, that can be used both to lift and lower materials and to move them horizontally. It uses one or more simple machines to create mechanical advantage and thus move loads beyond the normal capability of...
to allow the vehicle's crew to perform heavy lifting tasks such as removing the engine from a disabled tank.

After World War II, most countries' MBT models also had corresponding ARV variants. Many ARVs are also equipped with a bulldozer
Bulldozer
A bulldozer is a crawler equipped with a substantial metal plate used to push large quantities of soil, sand, rubble, etc., during construction work and typically equipped at the rear with a claw-like device to loosen densely-compacted materials.Bulldozers can be found on a wide range of sites,...
blade that can be used as an anchor
Anchor
An anchor is a device, normally made of metal, that is used to connect a vessel to the bed of a body of water to prevent the vessel from drifting due to wind or current. The word derives from Latin ancora, which itself comes from the Greek ἄγκυρα .Anchors can either be temporary or permanent...
when winching or as a stabiliser when lifting, a pump to transfer fuel
Fuel
Fuel is any material that stores energy that can later be extracted to perform mechanical work in a controlled manner. Most fuels used by humans undergo combustion, a redox reaction in which a combustible substance releases energy after it ignites and reacts with the oxygen in the air...
to another vehicle, and more. Some can even carry a spare engine
Engine
An engine or motor is a machine designed to convert energy into useful mechanical motion. Heat engines, including internal combustion engines and external combustion engines burn a fuel to create heat which is then used to create motion...
for field replacement, such the German
Germany
Germany , officially the Federal Republic of Germany , is a federal parliamentary republic in Europe. The country consists of 16 states while the capital and largest city is Berlin. Germany covers an area of 357,021 km2 and has a largely temperate seasonal climate...
Leopard 1 ARV. 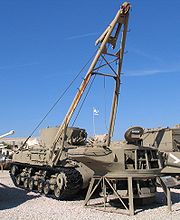