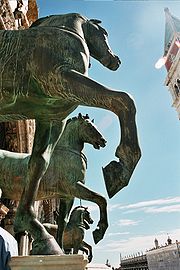 A quadriga is a car or chariot
Chariot
The chariot is a type of horse carriage used in both peace and war as the chief vehicle of many ancient peoples. Ox carts, proto-chariots, were built by the Proto-Indo-Europeans and also built in Mesopotamia as early as 3000 BC. The original horse chariot was a fast, light, open, two wheeled...
drawn by four horse
Horse
The horse is one of two extant subspecies of Equus ferus, or the wild horse. It is a single-hooved mammal belonging to the taxonomic family Equidae. The horse has evolved over the past 45 to 55 million years from a small multi-toed creature into the large, single-toed animal of today...
s abreast (the Roman Empire
Roman Empire
The Roman Empire was the post-Republican period of the ancient Roman civilization, characterised by an autocratic form of government and large territorial holdings in Europe and around the Mediterranean....
's equivalent of Ancient Greek
Ancient Greece
Ancient Greece is a civilization belonging to a period of Greek history that lasted from the Archaic period of the 8th to 6th centuries BC to the end of antiquity. Immediately following this period was the beginning of the Early Middle Ages and the Byzantine era. Included in Ancient Greece is the...
tethrippon). It was raced in the Ancient Olympic Games and other contests. It is represented in profile as the chariot of gods and heroes
Greek mythology
Greek mythology is the body of myths and legends belonging to the ancient Greeks, concerning their gods and heroes, the nature of the world, and the origins and significance of their own cult and ritual practices. They were a part of religion in ancient Greece...
on Greek vases and in bas-relief. The quadriga was adopted in ancient Roman
Ancient Rome
Ancient Rome was a thriving civilization that grew on the Italian Peninsula as early as the 8th century BC. Located along the Mediterranean Sea and centered on the city of Rome, it expanded to one of the largest empires in the ancient world....
chariot racing
Chariot racing
Chariot racing was one of the most popular ancient Greek, Roman and Byzantine sports. Chariot racing was often dangerous to both driver and horse as they frequently suffered serious injury and even death, but generated strong spectator enthusiasm...
. Quadrigas were emblems of triumph; Victory
Victoria (mythology)
In ancient Roman religion, Victoria was the personified goddess of victory. She is the Roman equivalent of the Greek goddess Nike, and was associated with Bellona. She was adapted from the Sabine agricultural goddess Vacuna and had a temple on the Palatine Hill...
and Fame
Pheme
In Greek mythology, Pheme was the personification of fame and renown, her favour being notability, her wrath being scandalous rumors. She was a daughter either of Gaia or of Hope, was described as "she who initiates and furthers communication" and had an altar at Athens...
often are depicted as the triumphant woman driving it. In classical mythology
Classical mythology
Classical mythology or Greco-Roman mythology is the cultural reception of myths from the ancient Greeks and Romans. Along with philosophy and political thought, mythology represents one of the major survivals of classical antiquity throughout later Western culture.Classical mythology has provided...
, the quadriga is the chariot of the gods; Apollo
Apollo
Apollo is one of the most important and complex of the Olympian deities in Greek and Roman mythology...
was depicted driving his quadriga across the heavens, delivering daylight and dispersing the night.

The word quadriga may refer to the chariot alone, the four horses without it, or the combination.

All modern quadrigas are based on the Triumphal Quadriga, a Roman or Greek sculpture
Classical sculpture
Classical sculpture refers to the forms of sculpture from Ancient Greece and Ancient Rome, as well as the Hellenized and Romanized civilizations under their rule or influence from about 500 BC to fall of Rome in AD 476. It also refers stylistically to modern sculptures done in a classical style....
which is the only surviving ancient quadriga. It was originally erected in the Hippodrome of Constantinople
Hippodrome of Constantinople
The Hippodrome of Constantinople was a circus that was the sporting and social centre of Constantinople, capital of the Byzantine Empire. Today it is a square named Sultanahmet Meydanı in the Turkish city of Istanbul, with only a few fragments of the original structure surviving...
, possibly on a triumphal arch
Triumphal arch
A triumphal arch is a monumental structure in the shape of an archway with one or more arched passageways, often designed to span a road. In its simplest form a triumphal arch consists of two massive piers connected by an arch, crowned with a flat entablature or attic on which a statue might be...
, and is now in St Mark's Basilica
St Mark's Basilica
The Patriarchal Cathedral Basilica of Saint Mark is the cathedral church of the Roman Catholic Archdiocese of Venice, northern Italy. It is the most famous of the city's churches and one of the best known examples of Byzantine architecture...
in Venice
Venice
Venice is a city in northern Italy which is renowned for the beauty of its setting, its architecture and its artworks. It is the capital of the Veneto region...
. It was looted by Venetian Crusaders in the Fourth Crusade
Fourth Crusade
The Fourth Crusade was originally intended to conquer Muslim-controlled Jerusalem by means of an invasion through Egypt. Instead, in April 1204, the Crusaders of Western Europe invaded and conquered the Christian city of Constantinople, capital of the Eastern Roman Empire...
of 1204 and placed on the terrace of the basilica. In 1797
French Revolutionary Wars: Campaigns of 1797
The French Revolutionary Wars continued from 1796, with France fighting the First Coalition.On 14 February, British admiral Jervis met and defeated a Spanish fleet off Portugal at the Battle of Cape St. Vincent. This prevented the Spanish fleet from rendezvousing with the French, removing a threat...
, Napoleon
Napoleon I of France
Napoleon Bonaparte was a French military and political leader during the latter stages of the French Revolution.As Napoleon I, he was Emperor of the French from 1804 to 1815...
carried the quadriga off to Paris
Paris
Paris is the capital and largest city in France, situated on the river Seine, in northern France, at the heart of the Île-de-France region...
, but in 1815 the horses were returned to Venice. Due to the effects of atmospheric pollution, the original quadriga was retired to a museum and replaced with a replica in the 1980s.

Some of the most significant full-size free-standing sculptures of quadrigas include, in approximate chronological order: