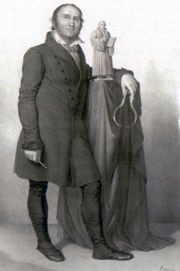 Johann Gottfried Schadow (20 May 1764 - 27 January 1850) was a German
Germany
Germany , officially the Federal Republic of Germany , is a federal parliamentary republic in Europe. The country consists of 16 states while the capital and largest city is Berlin. Germany covers an area of 357,021 km2 and has a largely temperate seasonal climate...
sculptor
Sculpture
Sculpture is three-dimensional artwork created by shaping or combining hard materials—typically stone such as marble—or metal, glass, or wood. Softer materials can also be used, such as clay, textiles, plastics, polymers and softer metals...
.

Schadow was born in Berlin
Berlin
Berlin is the capital city of Germany and is one of the 16 states of Germany. With a population of 3.45 million people, Berlin is Germany's largest city. It is the second most populous city proper and the seventh most populous urban area in the European Union...
, where his father was a poor tailor.
His first teacher was a much superior sculptor, Tassaert
Jean-Pierre-Antoine Tassaert
Jean-Pierre-Antoine Tassaert was a minor sculptor of Flemish extraction, who worked in the manner of Falconnet. He went to Paris as a young man to work in the atelier of Michel-Ange Slodtz, a member of a dynasty of designer-sculptors working for the royal account. After Slodtz's death in 1764, he...
, patronized by Frederick the Great; the master offered his daughter in marriage, but the pupil preferred to elope with a girl to Vienna
Vienna
Vienna is the capital and largest city of the Republic of Austria and one of the nine states of Austria. Vienna is Austria's primary city, with a population of about 1.723 million , and is by far the largest city in Austria, as well as its cultural, economic, and political centre...
, and the father-in-law not only condoned the offence but furnished money wherewith to visit Italy
Italy
Italy , officially the Italian Republic languages]] under the European Charter for Regional or Minority Languages. In each of these, Italy's official name is as follows:;;;;;;;;), is a unitary parliamentary republic in South-Central Europe. To the north it borders France, Switzerland, Austria and...
. Three years' study in Rome
Rome
Rome is the capital of Italy and the country's largest and most populated city and comune, with over 2.7 million residents in . The city is located in the central-western portion of the Italian Peninsula, on the Tiber River within the Lazio region of Italy.Rome's history spans two and a half...
formed his style, and in 1788 he returned to Berlin to succeed Tassaert as sculptor to the court and secretary to the Academy. Over half a century he produced upwards of two hundred works, varied in style as in subjects.

Among his ambitious efforts are Frederick the Great in Stettin, Blücher
Gebhard Leberecht von Blücher
Gebhard Leberecht von Blücher, Fürst von Wahlstatt , Graf , later elevated to Fürst von Wahlstatt, was a Prussian Generalfeldmarschall who led his army against Napoleon I at the Battle of the Nations at Leipzig in 1813 and at the Battle of Waterloo in 1815 with the Duke of Wellington.He is...
in Rostock
Rostock
Rostock -Early history:In the 11th century Polabian Slavs founded a settlement at the Warnow river called Roztoc ; the name Rostock is derived from that designation. The Danish king Valdemar I set the town aflame in 1161.Afterwards the place was settled by German traders...
and Luther
Martin Luther
Martin Luther was a German priest, professor of theology and iconic figure of the Protestant Reformation. He strongly disputed the claim that freedom from God's punishment for sin could be purchased with money. He confronted indulgence salesman Johann Tetzel with his Ninety-Five Theses in 1517...
in Wittenberg
Wittenberg
Wittenberg, officially Lutherstadt Wittenberg, is a city in Germany in the Bundesland Saxony-Anhalt, on the river Elbe. It has a population of about 50,000....
. His portrait statues include Frederick the Great playing the flute, and the crown-princess Louise and her sister. His busts, of which there are more than one hundred, include seventeen colossal heads in the Walhalla
Walhalla temple
The Walhalla temple is a hall of fame that honors laudable and distinguished Germans, famous personalities in German history — politicians, sovereigns, scientists and artists of the German tongue". The hall is housed in a neo-classical building above the Danube River, east of Regensburg, in...
, Ratisbon; from the life were modelled Goethe
Johann Wolfgang von Goethe
Johann Wolfgang von Goethe was a German writer, pictorial artist, biologist, theoretical physicist, and polymath. He is considered the supreme genius of modern German literature. His works span the fields of poetry, drama, prose, philosophy, and science. His Faust has been called the greatest long...
, Wieland
Christoph Martin Wieland
Christoph Martin Wieland was a German poet and writer.- Biography :He was born at Oberholzheim , which then belonged to the Free Imperial City of Biberach an der Riss in the south-east of the modern-day state of Baden-Württemberg...
, and Fichte
Johann Gottlieb Fichte
Johann Gottlieb Fichte was a German philosopher. He was one of the founding figures of the philosophical movement known as German idealism, a movement that developed from the theoretical and ethical writings of Immanuel Kant...
. 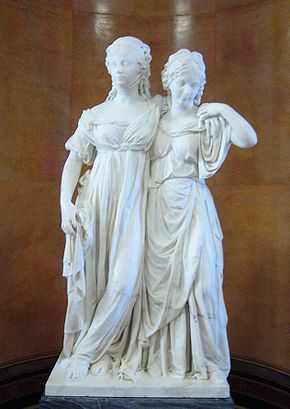 Of church monuments and memorial works thirty are enumerated; yet Schadow hardly ranks among Christian sculptors. He is claimed by classicists and idealists: the quadriga
Quadriga
A quadriga is a car or chariot drawn by four horses abreast . It was raced in the Ancient Olympic Games and other contests. It is represented in profile as the chariot of gods and heroes on Greek vases and in bas-relief. The quadriga was adopted in ancient Roman chariot racing...
on the Brandenburger Tor and the allegorical frieze on the facade of the Royal Mint, both in Berlin, are judged among the happiest studies from the antique. Schadow, as director of the Berlin Academy, had great influence. He wrote on the proportions of the human figure, on national physiognomy, etc.; and many volumes by himself and others describe and illustrate his method and his work.

Today, some of his sculptures and busts are displayed in the Friedrichswerdersche Kirche and the Alte Nationalgalerie
Alte Nationalgalerie
The Alte Nationalgalerie in Berlin is a gallery showing a collection of Classical, Romantic, Biedermeier, Impressionist and early Modernist artwork, all of which belong to the Staatliche Museen zu Berlin. The museum is situated on Museum Island, a UNESCO-designated World Heritage Site.- Founding...
in Berlin.

Schadow developed a friendship with Johann Wolfgang von Goethe when at first Goethe's son visited Schadow in Weimar. Schadow created 12 bronze medals of Goethe. One such medal is in the property of the British Museum
British Museum
The British Museum is a museum of human history and culture in London. Its collections, which number more than seven million objects, are amongst the largest and most comprehensive in the world and originate from all continents, illustrating and documenting the story of human culture from its...
. In 2009, one such medal was bestowed by the Goethe Institute upon Dr. Daisaku Ikeda
Daisaku Ikeda
is president of Sōka Gakkai International , a Nichiren Buddhist lay association which claims 12 million members in 192 countries and territories, and founder of several educational, cultural and peace research institutions.-Life and establishment of SGI:...
in recognition of his contributions to peace and Goethe's philosophy.

He was the grandfather of admiral Felix von Bendemann
Felix von Bendemann
Felix von Bendemann was an Admiral of the German Imperial Navy .Bendemann was born in Dresden, Kingdom of Saxony. He was the son of the painter Eduard Julius Friedrich Bendemann and Lida Schadow, who was the daughter of the sculptor Johann Gottfried Schadow...
of the German Imperial Navy
Kaiserliche Marine
The Imperial German Navy was the German Navy created at the time of the formation of the German Empire. It existed between 1871 and 1919, growing out of the small Prussian Navy and Norddeutsche Bundesmarine, which primarily had the mission of coastal defense. Kaiser Wilhelm II greatly expanded...
.
The source of this article is wikipedia, the free encyclopedia.  The text of this article is licensed under the GFDL.