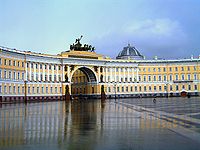 The General Staff Building is an edifice with a 580 m long bow-shaped facade, situated on Palace Square
Palace Square
Palace Square , connecting Nevsky Prospekt with Palace Bridge leading to Vasilievsky Island, is the central city square of St Petersburg and of the former Russian Empire...
in Saint Petersburg
Saint Petersburg
Saint Petersburg is a city and a federal subject of Russia located on the Neva River at the head of the Gulf of Finland on the Baltic Sea...
, Russia
Russia
Russia or , officially known as both Russia and the Russian Federation , is a country in northern Eurasia. It is a federal semi-presidential republic, comprising 83 federal subjects...
, in front of the Winter Palace
Winter Palace
The Winter Palace in Saint Petersburg, Russia, was, from 1732 to 1917, the official residence of the Russian monarchs. Situated between the Palace Embankment and the Palace Square, adjacent to the site of Peter the Great's original Winter Palace, the present and fourth Winter Palace was built and...
.

The building was designed by Carlo Rossi
Carlo Rossi (architect)
Carlo di Giovanni Rossi, was an Italian architect, who worked the major portion of his life in Russia. He was the author of many classical buildings and architectural ensembles in Saint Petersburg and its environments...
in the Empire style and built in 1819-1829. It consists of two wings, which are separated by a tripartite triumphal arch
Triumphal arch
A triumphal arch is a monumental structure in the shape of an archway with one or more arched passageways, often designed to span a road. In its simplest form a triumphal arch consists of two massive piers connected by an arch, crowned with a flat entablature or attic on which a statue might be...
adorned by sculptors Stepan Pimenov and Vasily Demuth-Malinovsky and commemorating the Russian victory over Napoleonic France in the Patriotic War of 1812. The arch links Palace Square through Bolshaya Morskaya St. to Nevsky Prospekt
Nevsky Prospekt
Nevsky Avenue |Prospekt]]) is the main street in the city of St. Petersburg, Russia. Planned by Peter the Great as beginning of the road to Novgorod and Moscow, the avenue runs from the Admiralty to the Moscow Railway Station and, after making a turn at Vosstaniya Square, to the Alexander...
. Until the capital was transferred to Moscow
Moscow
Moscow is the capital, the most populous city, and the most populous federal subject of Russia. The city is a major political, economic, cultural, scientific, religious, financial, educational, and transportation centre of Russia and the continent...
in 1918, the building served as the headquarters of the General Staff (western wing), Foreign Ministry and Finance Ministry (eastern wing). The western wing now hosts the headquarters of the Western Military District
Western Military District
Western Military District is one of the four operational strategic commands of the Armed Forces of the Russian Federation. The district was formed in Presidential Decree № 1144 signed on September 20, 2010...
. The eastern wing was transferred to the Hermitage Museum
Hermitage Museum
The State Hermitage is a museum of art and culture in Saint Petersburg, Russia. One of the largest and oldest museums of the world, it was founded in 1764 by Catherine the Great and has been opened to the public since 1852. Its collections, of which only a small part is on permanent display,...
in 1993.