Encyclopedia
Palace Square connecting Nevsky Prospekt
Nevsky Prospekt
Nevsky Avenue |Prospekt]]) is the main street in the city of St. Petersburg, Russia. Planned by Peter the Great as beginning of the road to Novgorod and Moscow, the avenue runs from the Admiralty to the Moscow Railway Station and, after making a turn at Vosstaniya Square, to the Alexander...
with Palace Bridge
Palace Bridge
Palace Bridge is a road traffic and foot bascule bridge spanning the Neva River in Saint Petersburg between Palace Square and Vasilievsky Island. Like every other Neva bridge , it is drawn by night, making foot travel between various parts of the city virtually impossible...
leading to Vasilievsky Island
Vasilievsky Island
Vasilyevsky Island is an island in Saint Petersburg, Russia, bordered by the rivers Bolshaya Neva and Malaya Neva in the south and northeast, and by the Gulf of Finland in the west. Vasilyevsky Island is separated from Dekabristov Island by the Smolenka River...
, is the central city square of St Petersburg and of the former Russian Empire
Russian Empire
The Russian Empire was a state that existed from 1721 until the Russian Revolution of 1917. It was the successor to the Tsardom of Russia and the predecessor of the Soviet Union...
. It was the setting of many events of worldwide significance, including the Bloody Sunday (1905)
Bloody Sunday (1905)
Bloody Sunday was a massacre on in St. Petersburg, Russia, where unarmed, peaceful demonstrators marching to present a petition to Tsar Nicholas II were gunned down by the Imperial Guard while approaching the city center and the Winter Palace from several gathering points. The shooting did not...
and the October Revolution of 1917. 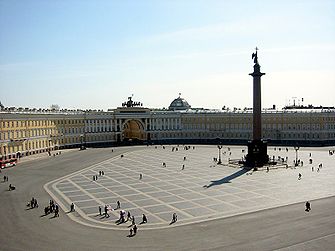 The earliest and most celebrated building on the square is the baroque
Baroque
The Baroque is a period and the style that used exaggerated motion and clear, easily interpreted detail to produce drama, tension, exuberance, and grandeur in sculpture, painting, literature, dance, and music...
white-and-azure Winter Palace
Winter Palace
The Winter Palace in Saint Petersburg, Russia, was, from 1732 to 1917, the official residence of the Russian monarchs. Situated between the Palace Embankment and the Palace Square, adjacent to the site of Peter the Great's original Winter Palace, the present and fourth Winter Palace was built and...
of Russian tsar
Tsar
Tsar is a title used to designate certain European Slavic monarchs or supreme rulers. As a system of government in the Tsardom of Russia and Russian Empire, it is known as Tsarist autocracy, or Tsarism...
s (1754–62), which gave the square its name. Although the adjacent buildings are designed in the Neoclassical
Neoclassical architecture
Neoclassical architecture was an architectural style produced by the neoclassical movement that began in the mid-18th century, manifested both in its details as a reaction against the Rococo style of naturalistic ornament, and in its architectural formulas as an outgrowth of some classicizing...
style, they perfectly match the palace in their scale, rhythm, and monumentality.

The opposite, southern side of the square was designed in the shape of an arc by George von Velten in the late 18th century. These plans were executed half a century later, when Alexander I of Russia
Alexander I of Russia
Alexander I of Russia , served as Emperor of Russia from 23 March 1801 to 1 December 1825 and the first Russian King of Poland from 1815 to 1825. He was also the first Russian Grand Duke of Finland and Lithuania....
envisaged the square as a vast monument to the Russia
Russia
Russia or , officially known as both Russia and the Russian Federation , is a country in northern Eurasia. It is a federal semi-presidential republic, comprising 83 federal subjects...
n victory over Napoleon and commissioned Carlo Rossi
Carlo Rossi (architect)
Carlo di Giovanni Rossi, was an Italian architect, who worked the major portion of his life in Russia. He was the author of many classical buildings and architectural ensembles in Saint Petersburg and its environments...
to design the bow-shaped Empire-style Building of the General Staff
General Staff Building (Saint Petersburg)
The General Staff Building is an edifice with a 580 m long bow-shaped facade, situated on Palace Square in Saint Petersburg, Russia, in front of the Winter Palace.The building was designed by Carlo Rossi in the Empire style and built in 1819-1829...
(1819–29), which centers on a double triumphal arch
Triumphal arch
A triumphal arch is a monumental structure in the shape of an archway with one or more arched passageways, often designed to span a road. In its simplest form a triumphal arch consists of two massive piers connected by an arch, crowned with a flat entablature or attic on which a statue might be...
crowned with a Roman quadriga
Quadriga
A quadriga is a car or chariot drawn by four horses abreast . It was raced in the Ancient Olympic Games and other contests. It is represented in profile as the chariot of gods and heroes on Greek vases and in bas-relief. The quadriga was adopted in ancient Roman chariot racing...
.

The centre of the square is marked with the Alexander Column
Alexander Column
The Alexander Column also known as Alexandrian Column , is the focal point of Palace Square in Saint Petersburg, Russia. The monument was erected after the Russian victory in the war with Napoleon's France...
(1830–34), designed by Auguste de Montferrand
Auguste de Montferrand
Auguste de Montferrand was a French Neoclassical architect who worked primarily in Russia. His two best known works are the Saint Isaac's Cathedral and the Alexander Column in St. Petersburg.-Family:...
. This red granite
Granite
Granite is a common and widely occurring type of intrusive, felsic, igneous rock. Granite usually has a medium- to coarse-grained texture. Occasionally some individual crystals are larger than the groundmass, in which case the texture is known as porphyritic. A granitic rock with a porphyritic...
column (the tallest of its kind in the world) is 47.5 metres high and weighs some 500 tons. It is set so well that no attachment to the base is needed.

The eastern side of the square is occupied by Alessandro Brullo's building of the Guards Corps Headquarters (1837–43). The western side, however, opens towards Admiralty Square, thus making the Palace Square a vital part of the grand suite of St Petersburg squares.

The square also serves as open-air venue for concerts by international acts, including Andrea Bocelli
Andrea Bocelli
Andrea Bocelli, is an Italian tenor, multi-instrumentalist and classical crossover artist. Born with poor eyesight, he became blind at the age of twelve following a soccer accident....
, Roger Waters
Roger Waters
George Roger Waters is an English musician, singer-songwriter and composer. He was a founding member of the progressive rock band Pink Floyd, serving as bassist and co-lead vocalist. Following the departure of bandmate Syd Barrett in 1968, Waters became the band's lyricist, principal songwriter...
, The Rolling Stones
The Rolling Stones
The Rolling Stones are an English rock band, formed in London in April 1962 by Brian Jones , Ian Stewart , Mick Jagger , and Keith Richards . Bassist Bill Wyman and drummer Charlie Watts completed the early line-up...
, AC/DC
AC/DC
AC/DC are an Australian rock band, formed in 1973 by brothers Malcolm and Angus Young. Commonly classified as hard rock, they are considered pioneers of heavy metal, though they themselves have always classified their music as simply "rock and roll"...
, Duran Duran
Duran Duran
Duran Duran are an English band, formed in Birmingham in 1978. They were one of the most successful bands of the 1980s and a leading band in the MTV-driven "Second British Invasion" of the United States...
, Anastacia
Anastacia
Anastacia is an American singer-songwriter. Anastacia has been highly successful in Europe, Asia, South Africa and South America, but has had only minor success in her native United States...
, Elton John
Elton John
Sir Elton Hercules John, CBE, Hon DMus is an English rock singer-songwriter, composer, pianist and occasional actor...
, Paul McCartney
Paul McCartney
Sir James Paul McCartney, MBE, Hon RAM, FRCM is an English musician, singer-songwriter and composer. Formerly of The Beatles and Wings , McCartney is listed in Guinness World Records as the "most successful musician and composer in popular music history", with 60 gold discs and sales of 100...
, Shakira
Shakira
Shakira Isabel Mebarak Ripoll , known professionally as Shakira , is a Colombian singer who emerged in the music scene of Colombia and Latin America in the early 1990s...
, Madonna
Madonna (entertainer)
Madonna is an American singer-songwriter, actress and entrepreneur. Born in Bay City, Michigan, she moved to New York City in 1977 to pursue a career in modern dance. After performing in the music groups Breakfast Club and Emmy, she released her debut album in 1983...
, Sting.
The source of this article is wikipedia, the free encyclopedia.  The text of this article is licensed under the GFDL.