Prince William of Orange-Nassau, the new sovereign of the Netherlands 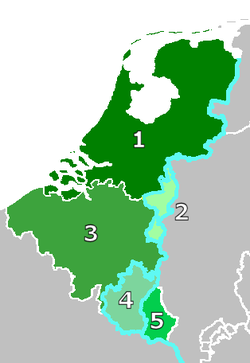 
Unification under William I

During the Congress of Vienna
Congress of Vienna
The Congress of Vienna was a conference of ambassadors of European states chaired by Klemens Wenzel von Metternich, and held in Vienna from September, 1814 to June, 1815. The objective of the Congress was to settle the many issues arising from the French Revolutionary Wars, the Napoleonic Wars,...
in 1815 France had to give up its rule of the Southern Netherlands. These negotiations were not made easy, because William tried to get as much out of it as he could. His ideas of a United Netherlands were based upon the actions of Hendrik van der Noot
Hendrik Van der Noot
Hendrik Karel Nicolaas van der Noot was a jurist, lawyer and politician from Brabant. He was one of the main players of the Brabant Revolution against the Austrian rule of Emperor Joseph II)...
, a lawyer and politician and one of the main players in the Revolution of the Southern Netherlands
United States of Belgium
The United States of Belgium, part of Brabant.In October, he invaded Brabant and captured Turnhout, defeating the Austrians in the Battle of Turnhout on October 27. Ghent was taken on November 13, and on November 17 the imperial regents Albert of Saxony and Archduchess Maria Christina fled Brussels...
against the Austrian Emperor
Joseph II, Holy Roman Emperor
Joseph II was Holy Roman Emperor from 1765 to 1790 and ruler of the Habsburg lands from 1780 to 1790. He was the eldest son of Empress Maria Theresa and her husband, Francis I...
(1789–1790). In 1789, after the Southern Netherlands declared themselves independent, Hendrik knew this was a fragile state and he tried to be reunited with the Republic of the Seven United Netherlands. Since then William had never forgotten this and after the fall of Napoleon he saw a chance.

Three different scenarios were made:


The first two scenarios came from "Memorandum of Holland" made in 1813 after the Battle of Leipzig
Battle of Leipzig
The Battle of Leipzig or Battle of the Nations, on 16–19 October 1813, was fought by the coalition armies of Russia, Prussia, Austria and Sweden against the French army of Napoleon. Napoleon's army also contained Polish and Italian troops as well as Germans from the Confederation of the Rhine...
. The last scenario came from William himself. The first scenario never made it because the Great Powers (Great Britain, Prussia, Austria and Russia) thought an independent Southern Netherlands/Belgium under an Austrian Prince was too weak and Austria was not interested in getting it back.

The Dutch question became a problem. The Great Powers of Europe chose the last scenario, but didn't want to go as far in enlarging the Netherlands as William.

The Republic of the Seven United Netherlands
The Austrian Netherlands within its borders of 1789 (so without French Flanders
French Flanders
French Flanders is a part of the historical County of Flanders in present-day France. The region today lies in the modern-day region of Nord-Pas de Calais, the department of Nord, and roughly corresponds to the arrondissements of Lille, Douai and Dunkirk on the Belgian border.-Geography:French...
)
The Prince-Bishopric of Liège, but on Prussia's behalf small changes were made to its borders

On 1 March 1815, while the Congress of Vienna was still going on, Napoleon escaped from Elba
Elba
Elba is a Mediterranean island in Tuscany, Italy, from the coastal town of Piombino. The largest island of the Tuscan Archipelago, Elba is also part of the National Park of the Tuscan Archipelago and the third largest island in Italy after Sicily and Sardinia...
and he created a large army against the Great Powers of Europe. He was defeated at the Battle of Waterloo
Battle of Waterloo
The Battle of Waterloo was fought on Sunday 18 June 1815 near Waterloo in present-day Belgium, then part of the United Kingdom of the Netherlands...
(at that time within the kingdom) by Prussian, British, Belgian, Dutch and Nassau (under the prince of Orange) troops.

William no longer hesitated and with permission of the Great Powers of Europe on 16 March 1815 he made himself King William I of the United Kingdom of the Netherlands. Luxembourg became a Grand-Duchy in personal union with the Netherlands and stayed a member of the German Confederation, being garrisoned by Prussian troops on behalf of the Dutch king.


Power of the King

The Netherlands had eight ministers, who did not have to answer to the Second Chamber, but only to the King himself. In fact, they were following his demands. The King also could rule by "Royal Order".

Economically the new state prospered, although many people in the north were unemployed and lived in poverty because a lot of English goods had destabilised the Dutch trade market.

Although financially stable, the south also had the burden of the nation's debt, but gained new trade markets in the Dutch colonies. Many people's welfare improved in the south lived in poverty because the profits of trade were used for big projects.

William tried to divide the nation's wealth more equally through, among others, the following actions:

Through these actions export of cotton, sheets, weapons and steel products increased. The fleet of Antwerp grew to 117 ships. Many of these projects were funded by King William himself.

The educational system was extended. Under William's rule the number of school-going children doubled from 150,000 to 300,000 by opening 1,500 new public schools. The south especially needed schools because many people could not read or write.


The way to separation

Socially the unification created many problems. The Burgundian and Calvinistic mentalities did not tolerate each other very well. The French-speaking elite acted in their personal interest by using the differences in religion, mentality, life style and communication. Both the north and the south had a different historical background and the Dutch and French speaking people both were afraid of being overruled by each other. France played a role in this by the "Legion belge et parisienne", financed with private funds but with permission of the French government, to make a unification with France possible.

Religion was also a reason for separation. While the north was dominantly Protestant
Protestantism
Protestantism is one of the three major groupings within Christianity. It is a movement that began in Germany in the early 16th century as a reaction against medieval Roman Catholic doctrines and practices, especially in regards to salvation, justification, and ecclesiology.The doctrines of the...
, the south was Catholic. The Catholic Church saw its influence declining in favour of the king. He built over 1,500 state schools where the Church was no longer the provider of education. Also the north had built up an independent history, and had experienced a golden age. So the Dutch people saw Belgium more as a territorial gain than a partner. This was used by the church and the French-speaking elite
Elite
Elite refers to an exceptional or privileged group that wields considerable power within its sphere of influence...
to create anti-Dutch feelings which led to the Belgian revolution
Belgian Revolution
The Belgian Revolution was the conflict which led to the secession of the Southern provinces from the United Kingdom of the Netherlands and established an independent Kingdom of Belgium....
.