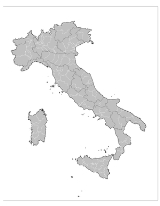 Encyclopedia
In Italy
Italy
Italy , officially the Italian Republic languages]] under the European Charter for Regional or Minority Languages. In each of these, Italy's official name is as follows:;;;;;;;;), is a unitary parliamentary republic in South-Central Europe. To the north it borders France, Switzerland, Austria and...
, a province
Province
A province is a territorial unit, almost always an administrative division, within a country or state.-Etymology:The English word "province" is attested since about 1330 and derives from the 13th-century Old French "province," which itself comes from the Latin word "provincia," which referred to...
(provincia) is an administrative division of intermediate level between a municipality (comune
Comune
In Italy, the comune is the basic administrative division, and may be properly approximated in casual speech by the English word township or municipality.-Importance and function:...
) and a region
Regions of Italy
The regions of Italy are the first-level administrative divisions of the state, constituting its first NUTS administrative level. There are twenty regions, of which five are constitutionally given a broader amount of autonomy granted by special statutes....
(regione).

A province is composed of many municipalities (comune), and usually several provinces form a region. The region of Aosta Valley is the only exception being the province coincident with the region.

The three main functions devolved to provinces are:

Each province is headed by a President assisted by a representative body, the Provincial Council, and an executive body, the Provincial Executive. President and members of Council are elected together by resident citizens: the coalition of the elected President (who needs an absolute majority in the first or second round of voting) gains the three fifths of the Council's seats. The Executive is chaired by the President who appoint others members, called assessori
Assessor (Italy)
In Italy an Assessor is a member of a Giunta, the executive body in all levels of local government: regions, provinces and communes....
.

In each province there is also a Prefect (prefetto), a representative of central government who heads an agency called prefettura-ufficio territoriale del governo. The Questor (questore) is the head of State's Police (Polizia di Stato
Polizia di Stato
The Polizia di Stato is one of the national police forces of Italy.It is the main police force for providing police duties and it is also responsible for patrolling motorways , railways , airports , customs as well as certain waterways, and assisting the local police...
) in the province and his office is called questura. There is also a province's police force depending from local government, called provincial police (polizia provinciale).

In 1861, at the birth of the Kingdom of Italy, there were 59 provinces. However, at that time the national territory was smaller than the current one: regions
Regions of Italy
The regions of Italy are the first-level administrative divisions of the state, constituting its first NUTS administrative level. There are twenty regions, of which five are constitutionally given a broader amount of autonomy granted by special statutes....
of Veneto
Veneto
Veneto is one of the 20 regions of Italy. Its population is about 5 million, ranking 5th in Italy.Veneto had been for more than a millennium an independent state, the Republic of Venice, until it was eventually annexed by Italy in 1866 after brief Austrian and French rule...
, Friuli-Venezia Giulia
Friuli-Venezia Giulia
Friuli–Venezia Giulia is one of the twenty regions of Italy, and one of five autonomous regions with special statute. The capital is Trieste. It has an area of 7,858 km² and about 1.2 million inhabitants. A natural opening to the sea for many Central European countries, the region is...
, Trentino Alto Adige and Lazio were not included in the kingdom.


Between the two World Wars

Following the annexion of Yugoslavia
Yugoslavia
Yugoslavia refers to three political entities that existed successively on the western part of the Balkans during most of the 20th century....
in 1941, the province of Zara joins the Governatorate of Dalmatia (comprising the province of Zara, Spalato e Cattaro), while in the occupied central part of today's Slovenia
Slovenia
Slovenia , officially the Republic of Slovenia , is a country in Central and Southeastern Europe touching the Alps and bordering the Mediterranean. Slovenia borders Italy to the west, Croatia to the south and east, Hungary to the northeast, and Austria to the north, and also has a small portion of...
was created the new Province of Lubiana.


Provinces of Istria and Dalmatia