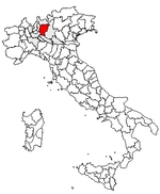 Encyclopedia
The Province of Bergamo is a province
Provinces of Italy
In Italy, a province is an administrative division of intermediate level between a municipality and a region .-Overview:...
in the Lombardy
Lombardy
Lombardy is one of the 20 regions of Italy. The capital is Milan. One-sixth of Italy's population lives in Lombardy and about one fifth of Italy's GDP is produced in this region, making it the most populous and richest region in the country and one of the richest in the whole of Europe...
region of Italy
Italy
Italy , officially the Italian Republic languages]] under the European Charter for Regional or Minority Languages. In each of these, Italy's official name is as follows:;;;;;;;;), is a unitary parliamentary republic in South-Central Europe. To the north it borders France, Switzerland, Austria and...
. It has a population of 1,098,740 (2010), an area of 2,722.86 square km, and contains 244 comuni (singular: comune
Comune
In Italy, the comune is the basic administrative division, and may be properly approximated in casual speech by the English word township or municipality.-Importance and function:...
). Its capital is the city of Bergamo
Bergamo
Bergamo is a town and comune in Lombardy, Italy, about 40 km northeast of Milan. The comune is home to over 120,000 inhabitants. It is served by the Orio al Serio Airport, which also serves the Province of Bergamo, and to a lesser extent the metropolitan area of Milan...
.

Its rivers include the Serio
Serio River
The Serio, in Lombard Sère, is an Italian river that flows entirely within Lombardy, crossing the provinces of Bergamo and Cremona. It is 124 kilometers long and it flows into the Adda at Bocca di Serio, to the south of Crema....
, the Brembo
Brembo River
The Brembo, in Lombard Brèmb o Brèmp, is a 74 km Italian river, a left tributary of the Adda, which runs entirely within the Province of Bergamo in the Lombardy Region....
and the Adda
Adda River
The Adda is a river in North Italy, a tributary of the Po. It rises in the Alps near the border with Switzerland and flows through Lake Como. The Adda joins the Po a few kilometres upstream of Cremona. It is 313 kilometres long...
at the southwestern boundary.

In the east, Lake Iseo
Lake Iseo
Lake Iseo or Lago d'Iseo or Sebino is the fourth largest lake in Lombardy, Italy, fed by the Oglio river.It is in the north of the country in the Val Camonica area, near the cities of Brescia and Bergamo. The lake is almost equally divided between the Provinces of Bergamo and Brescia...
forms its boundary which the Oglio from the Camonica Valley flows through. Minerals are found in the area of Trescore Balneario
Trescore Balneario
Trescore Balneario is a town and comune in the Province of Bergamo, Lombardy, northern Italy.-History:The city itself is mentioned for the first time in 996 AD....
and San Pellegrino
San Pellegrino
San Pellegrino is a brand of mineral water with naturally occurring carbonation and additional carbonation added by the bottler, produced and bottled at San Pellegrino Terme, in the Province of Bergamo, Lombardy, Italy...
(the source of the mineral water of the same name) and other places.

As of December 31, 2010http://demo.istat.it/bilmens2010gen/index02.html, the main municipality areas (comuni) by population are:

The low lying areas are rich in pastures along with corn, wine, grain, rice and flax that are cultivated. Hunting is common.
Very common is also the breeding of poultry, pigs with modern techniques, and the traditional sheep herding.

The province of Bergamo
Bergamo
Bergamo is a town and comune in Lombardy, Italy, about 40 km northeast of Milan. The comune is home to over 120,000 inhabitants. It is served by the Orio al Serio Airport, which also serves the Province of Bergamo, and to a lesser extent the metropolitan area of Milan...
economy is based on SMEs, so it is not easy to speak of main activities as very varied products are made.
The main heavy industries of the province of Bergamo are mineral processing, especially iron
Iron
Iron is a chemical element with the symbol Fe and atomic number 26. It is a metal in the first transition series. It is the most common element forming the planet Earth as a whole, forming much of Earth's outer and inner core. It is the fourth most common element in the Earth's crust...
, concrete
Concrete
Concrete is a composite construction material, composed of cement and other cementitious materials such as fly ash and slag cement, aggregate , water and chemical admixtures.The word concrete comes from the Latin word...
and marble
Marble
Marble is a metamorphic rock composed of recrystallized carbonate minerals, most commonly calcite or dolomite.Geologists use the term "marble" to refer to metamorphosed limestone; however stonemasons use the term more broadly to encompass unmetamorphosed limestone.Marble is commonly used for...
.
There is also a large tractor plant, in Treviglio
Treviglio
Treviglio is a town and comune in the province of Bergamo, in Lombardy, northern Italy. It lies 20 km south of the capital city, in the lower territory called "Bassa" marked by the Adda and the Serio rivers....
, and a large pipe plant, in Dalmine
Dalmine
Dalmine is a comune in the Province of Bergamo in the Italian region of Lombardy, located about 40 km northeast of Milan and about 8 km southwest of Bergamo. As of 31 December 2004, it had a population of 22,326 and an area of 11.6 km².The municipality of Dalmine contains the...

Silks, metallurgical products and clothing are also common.
Bergamo masons and assemblers are very famous for their ability and dedication to work.

As the end of 2006 the province of Bergamo host 92.000 immigrants from country outside the European union (less than 10% of the total population).