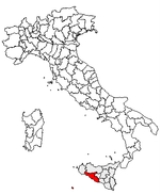 Encyclopedia
Agrigento is a province
Provinces of Italy
In Italy, a province is an administrative division of intermediate level between a municipality and a region .-Overview:...
in the autonomous island region of Sicily
Sicily
Sicily is a region of Italy, and is the largest island in the Mediterranean Sea. Along with the surrounding minor islands, it constitutes an autonomous region of Italy, the Regione Autonoma Siciliana Sicily has a rich and unique culture, especially with regard to the arts, music, literature,...
in Italy
Italy
Italy , officially the Italian Republic languages]] under the European Charter for Regional or Minority Languages. In each of these, Italy's official name is as follows:;;;;;;;;), is a unitary parliamentary republic in South-Central Europe. To the north it borders France, Switzerland, Austria and...
. It has an area of 3,042 km², and a total population
Population
A population is all the organisms that both belong to the same group or species and live in the same geographical area. The area that is used to define a sexual population is such that inter-breeding is possible between any pair within the area and more probable than cross-breeding with individuals...
of 454,370 (2009). There are 43 comune
Comune
In Italy, the comune is the basic administrative division, and may be properly approximated in casual speech by the English word township or municipality.-Importance and function:...
s (Italian: comuni) in the province (see Comunes of the Province of Agrigento
Comunes of the Province of Agrigento
The following is a list of the 43 comuni of the Province of Agrigento, Sicily, in Italy....
).