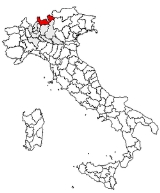 Encyclopedia
The Province of Sondrio (It. Provincia di Sondrio) is in the Lombardy
Lombardy
Lombardy is one of the 20 regions of Italy. The capital is Milan. One-sixth of Italy's population lives in Lombardy and about one fifth of Italy's GDP is produced in this region, making it the most populous and richest region in the country and one of the richest in the whole of Europe...
region of Italy
Italy
Italy , officially the Italian Republic languages]] under the European Charter for Regional or Minority Languages. In each of these, Italy's official name is as follows:;;;;;;;;), is a unitary parliamentary republic in South-Central Europe. To the north it borders France, Switzerland, Austria and...
. Its capital is the town of Sondrio
Sondrio
Sondrio is an Italian town and comune located in the heart of the Valtellina. Sondrio counts approximately 22,000 inhabitants and it is the administrative centre for the Lombard Province of Sondrio.- History :...
.