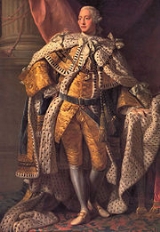 George III and the American Revolution

What was George III's role in the French Revolution?

1761    Marriage of King George III of the United Kingdom to Duchess Charlotte of Mecklenburg-Strelitz.

1761    George III and Charlotte of Mecklenburg-Strelitz are crowned King and Queen, respectively, of the Kingdom of Great Britain.

1768    John Wilkes is imprisoned for writing an article for ''The North Briton'' severely criticizing King George III. This action provokes rioting in London.

1768    James Otis, Jr. offends the King and Parliament in a speech to the Massachusetts General Court.

1775    King George III declares that the American colonies exist in a state of open and avowed rebellion.

1819    British explorer William Smith discovers the South Shetland Islands, and claims them in the name of King George III.

I wish nothing but good; therefore, everyone who does not agree with me is a traitor and a scoundrel.