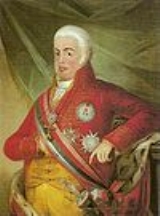 He was born in Lisbon
Lisbon
Lisbon is the capital city and largest city of Portugal with a population of 545,245 within its administrative limits on a land area of . The urban area of Lisbon extends beyond the administrative city limits with a population of 3 million on an area of , making it the 9th most populous urban...
in 1767 as an infante (Prince not heir to the throne) of Portugal. John was the 27th (or 28th according to some historians) monarch of Portugal.

In 1799 John assumed the reins of government as prince regent
Prince Regent
A prince regent is a prince who rules a monarchy as regent instead of a monarch, e.g., due to the Sovereign's incapacity or absence ....
in the name of his widowed mother, who had declined into mental illness (perhaps due to porphyria
Porphyria
Porphyrias are a group of inherited or acquired disorders of certain enzymes in the heme bio-synthetic pathway . They are broadly classified as acute porphyrias and cutaneous porphyrias, based on the site of the overproduction and accumulation of the porphyrins...
). He retained this position until his mother's death in 1816. John had been brought up in an ecclesiastical atmosphere and, being naturally of a somewhat weak and helpless character, was ill adapted for the responsibilities he was called on to undertake. His wife, Charlotte of Spain
Charlotte of Spain
Doña Carlota Joaquina of Spain was a Queen consort of Portugal as wife of John VI...
, dominated him. In 1807, Portugal was invaded by France. At the urging of Britain, the whole Portuguese royal family fled to Brazil
Transfer of the Portuguese Court to Brazil
The Transfer of the Portuguese Court to Brazil was an episode in the history of Portugal and the history of Brazil in which the Portuguese royal family and its court escaped from Lisbon on November 29, 1807 to Brazil, just days before Napoleonic forces captured the city on December 1...
, accompanied by an escort of British ships. His court in exile was established in Rio de Janeiro.

In 1816 John was recognized as king of Portugal after his mother's death but he continued to reside in Brazil, which he had raised to the status of a kingdom on 16 December 1815. The consequent spread of dissatisfaction in Portugal resulted in the peaceful Revolution of 24 August 1820
Liberal Revolution of 1820
The Liberal Revolution of 1820 was a political revolution that erupted in 1820 and lasted until 1826. It was unchained via a military insurrection in the city of Porto, in northern Portugal, that quickly and peacefully spread to the rest of the country. From 1807 to 1811 Napoleonic French forces...
, and the proclamation of a constitutional government, to which John swore fidelity on his return to Portugal in 1821. In the same year, and again in 1823, he had to suppress a rebellion led by his younger son Miguel
Miguel of Portugal
Dom Miguel I, sometimes Michael , was the King of Portugal between 1828 and 1834, the seventh child and second son of King John VI and his queen, Charlotte of Spain....
, whom he was ultimately compelled to banish in 1824.

Meanwhile his elder son and heir-apparent, Peter, declared Brazilian independence from Portugal on 7 September 1822, and subsequently declared himself Emperor Peter I. John refused to recognize Brazilian independence until 29 August 1825, when he restored Peter to the succession in the belief that Brazil and Portugal would be reunited in a dual monarchy federation after his own death. John died at Lisbon on 26 March 1826, and was briefly succeeded by Peter (as King Peter IV). Recent tests made to John's intestines, which had been kept buried in a vase, demonstrated that he may have died due to arsenic
Arsenic
Arsenic is a chemical element with the symbol As, atomic number 33 and relative atomic mass 74.92. Arsenic occurs in many minerals, usually in conjunction with sulfur and metals, and also as a pure elemental crystal. It was first documented by Albertus Magnus in 1250.Arsenic is a metalloid...
poisoning. His nemesis, Napoleon I of France
Napoleon I of France
Napoleon Bonaparte was a French military and political leader during the latter stages of the French Revolution.As Napoleon I, he was Emperor of the French from 1804 to 1815...
, may have also suffered a similar fate.

A fictionalized version of much of his life is depicted in the Brazilian movie Carlota Joaquina - Princesa do Brasil.