Encyclopedia
Porcupines are rodents with a coat of sharp spines
Spine (zoology)
A spine is a hard, thorny or needle-like structure which occurs on various animals. Animals such as porcupines and sea urchins grow spines as a self-defense mechanism. Spines are often formed of keratin...
, or quills, that defend or camouflage them from predators. They are indigenous to the Americas, southern Asia, and Africa. Porcupines are the third largest of the rodents, behind the capybara
Capybara
The capybara , also known as capivara in Portuguese, and capibara, chigüire in Venezuela, Colombia, and Ecuador ronsoco in Peru, chigüiro, and carpincho in Spanish, is the largest living rodent in the world. Its closest relatives are agouti, chinchillas, coyphillas, and guinea pigs...
and the beaver
Beaver
The beaver is a primarily nocturnal, large, semi-aquatic rodent. Castor includes two extant species, North American Beaver and Eurasian Beaver . Beavers are known for building dams, canals, and lodges . They are the second-largest rodent in the world...
. Most porcupines are about 25–36 in (63.5–91.4 cm) long, with an 8–10 in (20.3–25.4 cm) long tail. Weighing between 12 pound, they are rounded, large and slow. Porcupines come in various shades of brown, grey, and the unusual white. Porcupines' spiny protection resembles that of the unrelated erinaceomorph hedgehog
Hedgehog
A hedgehog is any of the spiny mammals of the subfamily Erinaceinae and the order Erinaceomorpha. There are 17 species of hedgehog in five genera, found through parts of Europe, Asia, Africa, and New Zealand . There are no hedgehogs native to Australia, and no living species native to the Americas...
s and monotreme
Monotreme
Monotremes are mammals that lay eggs instead of giving birth to live young like marsupials and placental mammals...
echidna
Echidna
Echidnas , also known as spiny anteaters, belong to the family Tachyglossidae in the monotreme order of egg-laying mammals. There are four extant species, which, together with the platypus, are the only surviving members of that order and are the only extant mammals that lay eggs...
s.

The common porcupine is an herbivore
Herbivore
Herbivores are organisms that are anatomically and physiologically adapted to eat plant-based foods. Herbivory is a form of consumption in which an organism principally eats autotrophs such as plants, algae and photosynthesizing bacteria. More generally, organisms that feed on autotrophs in...
. It eats leaves, herbs,twigs and green plants like skunk cabbage and clover and in the winter it may eat bark. The North American porcupine often climbs trees to find food. The African porcupine is not a climber and forages on the ground. It is mostly nocturnal, but will sometimes forage for food in the day. Porcupines have become a pest in Kenya
Kenya
Kenya , officially known as the Republic of Kenya, is a country in East Africa that lies on the equator, with the Indian Ocean to its south-east...
and are eaten as a delicacy. 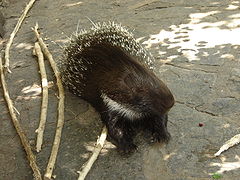 The eleven Old World porcupine
Old World porcupine
The Old World porcupines, or Hystricidae, are large terrestrial rodents, distinguished by the spiny covering from which they take their name. They range over the south of Europe, most of Africa, India, and the Maritime Southeast Asia as far east as Borneo...
s tend to be fairly big, and have spikes that are grouped in clusters.

Porcupines' quills, or spines
Spine (zoology)
A spine is a hard, thorny or needle-like structure which occurs on various animals. Animals such as porcupines and sea urchins grow spines as a self-defense mechanism. Spines are often formed of keratin...
, take on various forms, depending on the species, but all are modified hairs coated with thick plates of keratin
Keratin
Keratin refers to a family of fibrous structural proteins. Keratin is the key of structural material making up the outer layer of human skin. It is also the key structural component of hair and nails...
, and they are embedded in the skin
Skin
-Dermis:The dermis is the layer of skin beneath the epidermis that consists of connective tissue and cushions the body from stress and strain. The dermis is tightly connected to the epidermis by a basement membrane. It also harbors many Mechanoreceptors that provide the sense of touch and heat...
musculature. Old World porcupines (Hystricidae) have quills embedded in clusters, whereas in New World porcupines (Erethizontidae), single quills are interspersed with bristles, underfur and hair.

Quills are released by contact with them, or they may drop out when the porcupine shakes its body, but cannot be projected at attackers. New quills grow to replace lost ones. From ancient times, it was believed that porcupines could throw their quills at an enemy, but this has long been refuted.

Porcupines are occasionally eaten by humans, although they are not a large or popular source of food. More commonly, their quills and guardhairs are used for traditional decorative clothing. For example, their guardhairs are used in the creation of the Native American
Indigenous peoples of the Americas
The indigenous peoples of the Americas are the pre-Columbian inhabitants of North and South America, their descendants and other ethnic groups who are identified with those peoples. Indigenous peoples are known in Canada as Aboriginal peoples, and in the United States as Native Americans...
"porky roach"
Roach (headdress)
Porcupine hair roaches are a traditional headdress of a number of Native American tribes in what is now present-day New England, the Great Lakes and Missouri River regions, including the Potawatomi who lived where Chicago now stands and the Mohawk tribes. They were and still are most often worn at...
headdress.

Porcupines occupy a short range of habitats in tropical and temperate parts of Asia
Asia
Asia is the world's largest and most populous continent, located primarily in the eastern and northern hemispheres. It covers 8.7% of the Earth's total surface area and with approximately 3.879 billion people, it hosts 60% of the world's current human population...
, Southern Europe
Southern Europe
The term Southern Europe, at its most general definition, is used to mean "all countries in the south of Europe". However, the concept, at different times, has had different meanings, providing additional political, linguistic and cultural context to the definition in addition to the typical...
, Africa
Africa
Africa is the world's second largest and second most populous continent, after Asia. At about 30.2 million km² including adjacent islands, it covers 6% of the Earth's total surface area and 20.4% of the total land area...
, and North
North America
North America is a continent wholly within the Northern Hemisphere and almost wholly within the Western Hemisphere. It is also considered a northern subcontinent of the Americas...
and South America
South America
South America is a continent situated in the Western Hemisphere, mostly in the Southern Hemisphere, with a relatively small portion in the Northern Hemisphere. The continent is also considered a subcontinent of the Americas. It is bordered on the west by the Pacific Ocean and on the north and east...
. Porcupines live in forests, deserts, rocky outcrops and hillsides. Some New World porcupines live in trees, but Old World porcupines stay on the rocks. Porcupines can be found on rocky areas up to 3700 m (12,139.1 ft) high. Porcupines are generally nocturnal but are occasionally active during daylight.

Porcupines in search of salt
Sodium chloride
Sodium chloride, also known as salt, common salt, table salt or halite, is an inorganic compound with the formula NaCl. Sodium chloride is the salt most responsible for the salinity of the ocean and of the extracellular fluid of many multicellular organisms...
sometimes enter human habitats, eating plywood
Plywood
Plywood is a type of manufactured timber made from thin sheets of wood veneer. It is one of the most widely used wood products. It is flexible, inexpensive, workable, re-usable, and can usually be locally manufactured...
cured with sodium nitrate
Sodium nitrate
Sodium nitrate is the chemical compound with the formula NaNO3. This salt, also known as Chile saltpeter or Peru saltpeter to distinguish it from ordinary saltpeter, potassium nitrate, is a white solid which is very soluble in water...
, certain paints, tool handles, doors, tables, houses, footwear, clothes and other items that have been coated in salty sweat. Porcupines are attracted to roads in areas where rock salt is used to melt ice and snow and are known to gnaw on vehicle tires or wiring coated in road salt. Salt licks placed nearby can prevent porcupines from injuring themselves.

Natural sources of salt consumed by porcupines include varieties of salt-rich plants (such as yellow water lily
Nymphaea mexicana
Nymphaea mexicana is a species of aquatic plant that is native to the Southern United States and Mexico as far south as Michoacan. Common names include Yellow Waterlily, Mexican Waterlily and Banana Waterlily. It is perhaps best known as a noxious weed in wetlands outside of its native range, such...
and aquatic liverwort), fresh animal bones, outer tree bark, mud in salt-rich soils, and objects imbued with urine
Urine
Urine is a typically sterile liquid by-product of the body that is secreted by the kidneys through a process called urination and excreted through the urethra. Cellular metabolism generates numerous by-products, many rich in nitrogen, that require elimination from the bloodstream...
.

Order Rodent
Rodent
Rodentia is an order of mammals also known as rodents, characterised by two continuously growing incisors in the upper and lower jaws which must be kept short by gnawing....
ia