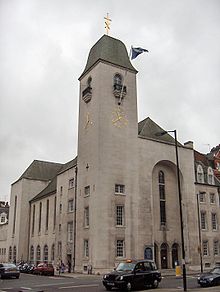 St Columba's Church
St Columba's Church, London
St Columba's Church is one of the two London congregations of the Church of Scotland. The church building is located in Pont Street, Knightsbridge, near Harrod's department store....
in Pont Street was designed in the 1950s by the architect Sir Edward Maufe
Edward Maufe
Sir Edward Brantwood Maufe KBE, R.A, F.R.I.B.A. was an English architect and designer, noted chiefly for his work on places of worship and remembrance memorials. He was a skilled interior designer and designed many pieces of furniture...
(1883–1974), who also designed the brick Guildford Cathedral
Guildford Cathedral
The Cathedral Church of the Holy Spirit, Guildford is the Anglican cathedral at Guildford, Surrey, England.-Construction:Guildford was made a diocese in its own right in 1927, and work on its new cathedral, designed by Sir Edward Maufe, began nine years later, with the foundation stone being laid...
. It is one of the two London congregations of the Church of Scotland
Church of Scotland
The Church of Scotland, known informally by its Scots language name, the Kirk, is a Presbyterian church, decisively shaped by the Scottish Reformation....
. The original St Columba's Church building of 1884 was destroyed during the Blitz
The Blitz
The Blitz was the sustained strategic bombing of Britain by Nazi Germany between 7 September 1940 and 10 May 1941, during the Second World War. The city of London was bombed by the Luftwaffe for 76 consecutive nights and many towns and cities across the country followed...
of World War II
World War II
World War II, or the Second World War , was a global conflict lasting from 1939 to 1945, involving most of the world's nations—including all of the great powers—eventually forming two opposing military alliances: the Allies and the Axis...
on the night of 10 May 1941.

A restaurant called Drones is located at 1 Pont Street http://www.viewlondon.co.uk/info_restaurant_maps_7294.html, not to be confused with the fictional Drones Club
Drones Club
The Drones Club is a recurring fictional location in the stories of British comic writer P. G. Wodehouse, being a gentlemen's club in London. Many of his Jeeves and Blandings Castle stories feature the club or its members....
of P. G. Wodehouse
P. G. Wodehouse
Sir Pelham Grenville Wodehouse, KBE was an English humorist, whose body of work includes novels, short stories, plays, poems, song lyrics, and numerous pieces of journalism. He enjoyed enormous popular success during a career that lasted more than seventy years and his many writings continue to be...
.

Pont Street is referred to in Evelyn Waugh
Evelyn Waugh
Arthur Evelyn St. John Waugh , known as Evelyn Waugh, was an English writer of novels, travel books and biographies. He was also a prolific journalist and reviewer...
's novel Brideshead Revisited
Brideshead Revisited
Brideshead Revisited, The Sacred & Profane Memories of Captain Charles Ryder is a novel by English writer Evelyn Waugh, first published in 1945. Waugh wrote that the novel "deals with what is theologically termed 'the operation of Grace', that is to say, the unmerited and unilateral act of love by...
, as a place related to typical English snobbery. In the novel, the character Julia and her friends say that "it was 'Pont Street' to wear a signet ring and to give chocolates at the theatre; it was 'Pont Street' at a dance to say, 'Can I forage for you?'". In Nancy Mitford
Nancy Mitford
Nancy Freeman-Mitford, CBE , styled The Hon. Nancy Mitford before her marriage and The Hon. Mrs Peter Rodd thereafter, was an English novelist and biographer, one of the Bright Young People on the London social scene in the inter-war years...
's Love in a Cold Climate
Love in a Cold Climate
Love in a Cold Climate is a novel by Nancy Mitford, first published in 1949. The title is a direct quotation from George Orwell's novel Keep The Aspidistra Flying .-Plot summary:...
, the heroine's aunt, who is bringing her up to mix in the best society, is said to "keep her nose firmly to Pont Street".