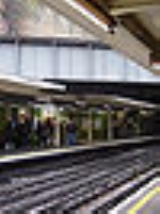 Encyclopedia
Sloane Square is a London Underground
London Underground
The London Underground is a rapid transit system serving a large part of Greater London and some parts of Buckinghamshire, Hertfordshire and Essex in England...
station in Sloane Square
Sloane Square
Sloane Square is a small hard-landscaped square on the boundaries of the fashionable London districts of Knightsbridge, Belgravia and Chelsea, located southwest of Charing Cross, in the Royal Borough of Kensington and Chelsea. The square is part of the Hans Town area designed in 1771 by Henry...
, in the Chelsea
Chelsea, London
Chelsea is an area of West London, England, bounded to the south by the River Thames, where its frontage runs from Chelsea Bridge along the Chelsea Embankment, Cheyne Walk, Lots Road and Chelsea Harbour. Its eastern boundary was once defined by the River Westbourne, which is now in a pipe above...
district of The Royal Borough of Kensington and Chelsea
Royal Borough of Kensington and Chelsea
The Royal Borough of Kensington and Chelsea is a central London borough of Royal borough status. After the City of Westminster, it is the wealthiest borough in England....
. It is served by the District
District Line
The District line is a line of the London Underground, coloured green on the Tube map. It is a "sub-surface" line, running through the central area in shallow cut-and-cover tunnels. It is the busiest of the sub-surface lines. Out of the 60 stations served, 25 are underground...
and Circle Lines and is between South Kensington
South Kensington tube station
South Kensington is a London Underground station in Kensington, west London. It is served by the District, Circle and Piccadilly lines. On the District and Circle lines, the station is between Gloucester Road and Sloane Square, and on the Piccadilly Line, it is between Gloucester Road and...
and Victoria
Victoria station (London)
Victoria station, also known as London Victoria, is a central London railway terminus and London Underground complex. It is named after nearby Victoria Street and not Queen Victoria. It is the second busiest railway terminus in London after Waterloo, and includes an air terminal for passengers...
. It is in Travelcard Zone 1
Travelcard Zone 1
Fare zone 1 is the central zone of Transport for London's zonal fare system used for calculating the price of tickets for travel on the London Underground, London Overground, Docklands Light Railway and, since 2007, on National Rail services. For most tickets, travel through the zone is charged...
.

The entrance to the station is on the east side of Sloane Square (A3217), adjacent to the Royal Court Theatre
Royal Court Theatre
The Royal Court Theatre is a non-commercial theatre on Sloane Square, in the Royal Borough of Kensington and Chelsea. It is noted for its contributions to modern theatre...
. It is the nearest station for Kings Road
Kings Road
King's Road or Kings Road, known popularly as The King's Road or The KR, is a major, well-known street stretching through Chelsea and Fulham, both in west London, England...
shopping, the Peter Jones
Peter Jones (department store)
Peter Jones is a large, established and exclusive department store in central London. It is owned by John Lewis Partnership and located in Sloane Square, Chelsea.-History :...
department store and the Cadogan Hall
Cadogan Hall
Cadogan Hall is a 900-seat capacity concert hall on Sloane Terrace in Chelsea / Belgravia in the Royal Borough of Kensington and Chelsea, London, United Kingdom...
.

The construction of the station was complicated by the crossing of the site by the River Westbourne
River Westbourne
The River Westbourne is a river in London, England. It flows from Hampstead down through Hyde Park to Sloane Square and into the River Thames at Chelsea...
which ran through Hyde Park
Hyde Park, London
Hyde Park is one of the largest parks in central London, United Kingdom, and one of the Royal Parks of London, famous for its Speakers' Corner.The park is divided in two by the Serpentine...
as the Serpentine Lake
Serpentine (lake)
The Serpentine is a 28-acre recreational lake in Hyde Park, London, England, created in 1730. Although it is common to refer to the entire body of water as the Serpentine, strictly the name refers only to the eastern half of the lake...
, and was originally crossed by the Knight's Bridge at Knightsbridge
Knightsbridge
Knightsbridge is a road which gives its name to an exclusive district lying to the west of central London. The road runs along the south side of Hyde Park, west from Hyde Park Corner, spanning the City of Westminster and the Royal Borough of Kensington and Chelsea...
. The River was carried above the platform in a large iron pipe suspended from girders. It remains in place today.

From 1 August 1872, the "Middle Circle
Middle Circle
The Middle Circle was a railway route in London which operated in the late 19th and early 20th centuries over tracks which are now mainly part of the London Underground...
" service also began operations through Sloane Square running from Moorgate
Moorgate station
Moorgate station is a central London railway terminus and London Underground station on Moorgate in the City of London; it provides National Rail services by First Capital Connect for Hertford, Welwyn Garden City and Letchworth and also serves the Circle, Hammersmith & City, Metropolitan Lines and...
along the MR's tracks on the north side of the Inner Circle to Paddington then over the Hammersmith & City Railway
Hammersmith & City Line
The Hammersmith & City line is a subsurface London Underground line. It connects Hammersmith in the west with Barking in the east, running through the northern part of central London. It is coloured salmon pink on the Tube map...
(H&CR) track to Latimer Road
Latimer Road tube station
Latimer Road Station is a London Underground station in North Kensington on the Circle and Hammersmith & City lines between Wood Lane and Ladbroke Grove stations...
then, via a now demolished link, to the West London Line to Addison Road and the MDR to Mansion House. The service was operated jointly by the H&CR and the MDR.

In the late 1930s, the station building was rebuilt in the modern style and escalators were installed between the ticket hall and the platforms. The new station building did not last long as it was mostly destroyed during World War II
World War II
World War II, or the Second World War , was a global conflict lasting from 1939 to 1945, involving most of the world's nations—including all of the great powers—eventually forming two opposing military alliances: the Allies and the Axis...
. A German bomb that fell in November 1940 killed 36 and injured 79 passengers on a train in the station and destroyed the ticket hall, escalators and the glazed roof over the tracks.

In 1949, the Metropolitan Line operated Inner Circle route was given its own identity on the tube map
Tube map
The Tube map is a schematic transit map representing the lines and stations of London's rapid transit railway systems, namely the London Underground , the Docklands Light Railway and London Overground....
as the Circle Line. By 1951 the station had been rebuilt again in a similar style to the 1930s building. The arched glass roof was not replaced and the current station does not have the light open atmosphere of the original. The office building above the station entrance is a later addition.

On 5 April 1960, Peter Llewelyn Davies, one of the Llewelyn Davies boys
Llewelyn Davies boys
The Davies boys were the sons of Arthur and Sylvia Llewelyn Davies . They served as the inspiration for the characters of Peter Pan and the other boys of J. M...
who were the inspiration for the boy characters of J. M. Barrie
J. M. Barrie
Sir James Matthew Barrie, 1st Baronet, OM was a Scottish author and dramatist, best remembered today as the creator of Peter Pan. The child of a family of small-town weavers, he was educated in Scotland. He moved to London, where he developed a career as a novelist and playwright...
's Peter Pan, or The Boy Who Wouldn't Grow Up, and who resented the public association with the character named after him, committed suicide by throwing himself under a train as it was pulling into the station.

On 26 December 1973, a terrorist bomb exploded in the telephone kiosk in the booking office. No one was injured.