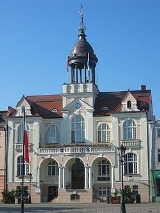 Wejherowo was founded in 1643 as Wola Wejherowska, by the voivode of the Malbork Voivodeship
Malbork Voivodeship
The Malbork Voivodeship was a unit of administrative division and local government in the Kingdom of Poland from 1454/1466 until the partitions in 1772-1795. Together with the Pomeranian and Chełmno Voivodeships and the Prince-Bishopric of Warmia it formed the historical province of Royal Prussia...
, Jakub Wejher
Jakub Wejher
Jakub Weiher , a member of the Polish line of the Weyher family from Germany was a Count of the Holy Roman Empire and member of the Polish-Lithuanian Commonwealth szlachta . His coat of arms was Wejher...
, with the consent of King Władysław IV Vasa
Władysław IV Vasa
Władysław IV Vasa was a Polish and Swedish prince from the House of Vasa. He reigned as King of the Polish–Lithuanian Commonwealth from 8 November 1632 to his death in 1648....
of Poland. Wejher, who was saved during the Smolensk War
Smolensk War
The Smolensk War was a conflict fought between the Polish-Lithuanian Commonwealth and Russia.Hostilities began in October 1632 when Tsar forces tried to recapture the city of Smolensk, a former Russian possession. Small military engagements produced mixed results for both sides, but the surrender...
, built two churches in the new settlement (The Holy Trinity and Saint Ann). He also brought in Franciscan
Franciscan
Most Franciscans are members of Roman Catholic religious orders founded by Saint Francis of Assisi. Besides Roman Catholic communities, there are also Old Catholic, Anglican, Lutheran, ecumenical and Non-denominational Franciscan communities....
Fathers, built a monastery, and founded the Calvary of Wejherowo, consisting of 26 chapels.

After the First Partition of Poland
Partitions of Poland
The Partitions of Poland or Partitions of the Polish–Lithuanian Commonwealth took place in the second half of the 18th century and ended the existence of the Polish–Lithuanian Commonwealth, resulting in the elimination of sovereign Poland for 123 years...
in 1772, the town was annexed by the Kingdom of Prussia
Kingdom of Prussia
The Kingdom of Prussia was a German kingdom from 1701 to 1918. Until the defeat of Germany in World War I, it comprised almost two-thirds of the area of the German Empire...
, administered within the new province of West Prussia
West Prussia
West Prussia was a province of the Kingdom of Prussia from 1773–1824 and 1878–1919/20 which was created out of the earlier Polish province of Royal Prussia...
, and had its name in German changed from Weihersfrei to Neustadt in Westpreußen ("new town in West Prussia"). Decisive factors which boosted the development of the town in the 19th century were the 1818 establishment of Landkreis Neustadt (Westpr.), an administrative district, and the construction of the Danzig (Gdańsk
Gdansk
Gdańsk is a Polish city on the Baltic coast, at the centre of the country's fourth-largest metropolitan area.The city lies on the southern edge of Gdańsk Bay , in a conurbation with the city of Gdynia, spa town of Sopot, and suburban communities, which together form a metropolitan area called the...
) – Stettin (Szczecin
Szczecin
Szczecin , is the capital city of the West Pomeranian Voivodeship in Poland. It is the country's seventh-largest city and the largest seaport in Poland on the Baltic Sea. As of June 2009 the population was 406,427....
) railway line. Neustadt became part of the German Empire
German Empire
The German Empire refers to Germany during the "Second Reich" period from the unification of Germany and proclamation of Wilhelm I as German Emperor on 18 January 1871, to 1918, when it became a federal republic after defeat in World War I and the abdication of the Emperor, Wilhelm II.The German...
in 1871 during the Prussian-led unification of Germany
Unification of Germany
The formal unification of Germany into a politically and administratively integrated nation state officially occurred on 18 January 1871 at the Versailles Palace's Hall of Mirrors in France. Princes of the German states gathered there to proclaim Wilhelm of Prussia as Emperor Wilhelm of the German...
. During the second half of the 19th century, a significant number of Jewish families began migrating to Syracuse, New York
Syracuse, New York
Syracuse is a city in and the county seat of Onondaga County, New York, United States, the largest U.S. city with the name "Syracuse", and the fifth most populous city in the state. At the 2010 census, the city population was 145,170, and its metropolitan area had a population of 742,603...
, including the renowned Shubert theatrical family
Shubert family
The Shubert family of New York City, New York was responsible for the establishment of the Broadway district, in New York City, as the hub of the theatre industry in the United States...
.

The town became part of the Second Polish Republic
Second Polish Republic
The Second Polish Republic, Second Commonwealth of Poland or interwar Poland refers to Poland between the two world wars; a period in Polish history in which Poland was restored as an independent state. Officially known as the Republic of Poland or the Commonwealth of Poland , the Polish state was...
in 1920 in the aftermath of World War I
World War I
World War I , which was predominantly called the World War or the Great War from its occurrence until 1939, and the First World War or World War I thereafter, was a major war centred in Europe that began on 28 July 1914 and lasted until 11 November 1918...
. Wejherowo was the capital of Wejherowo County
Wejherowo County
Wejherowo County is a unit of territorial administration and local government in Pomeranian Voivodeship, northern Poland, on the Baltic coast. It came into being on January 1, 1999, as a result of the Polish local government reforms passed in 1998. Its administrative seat and largest town is...
in Pomeranian Voivodeship
Pomeranian Voivodeship
Pomeranian Voivodeship, or Pomerania Province , is a voivodeship, or province, in north-central Poland. It comprises most of Pomerelia , as well as an area east of the Vistula River...
, becoming a headquarters of state administration responsible for maritime economy. After the invasion of Poland
Invasion of Poland (1939)
The Invasion of Poland, also known as the September Campaign or 1939 Defensive War in Poland and the Poland Campaign in Germany, was an invasion of Poland by Germany, the Soviet Union, and a small Slovak contingent that marked the start of World War II in Europe...
beginning World War II
World War II
World War II, or the Second World War , was a global conflict lasting from 1939 to 1945, involving most of the world's nations—including all of the great powers—eventually forming two opposing military alliances: the Allies and the Axis...
, Wejherowo was annexed into Nazi Germany
Nazi Germany
Nazi Germany , also known as the Third Reich , but officially called German Reich from 1933 to 1943 and Greater German Reich from 26 June 1943 onward, is the name commonly used to refer to the state of Germany from 1933 to 1945, when it was a totalitarian dictatorship ruled by...
as part of Reichsgau Danzig-West Prussia
Reichsgau Danzig-West Prussia
The Reichsgau Danzig-West Prussia was a Nazi German province created on 8 October 1939 from the territory of the annexed Free City of Danzig, the annexed Polish province Greater Pomeranian Voivodship , and the Nazi German Regierungsbezirk West Prussia of Gau East Prussia. Before 2 November 1939,...
. Most of the town's Jewish community was murdered
Holocaust in Poland
The Holocaust, also known as haShoah , was a genocide officially sanctioned and executed by the Third Reich during World War II. It took the lives of three million Polish Jews, destroying an entire civilization. Only a small percentage survived or managed to escape beyond the reach of the Nazis...
by the Nazis during the war, while many local Poles were also victims of the Nazi extermination policy. The nearby village of Piaśnica Wielka was the site of a mass murder
Mass murders in Piaśnica
The mass murders in Piaśnica were a set of mass executions carried out by Germans, during World War II, between the fall of 1939 and spring of 1940 in Piasnica Wielka in the Darzlubska Wilderness near Wejherowo. Standard estimates put the number of victims at between twelve thousand and fourteen...
where about 12,000 Poles were shot in 1939. Wejherowo was restored to Poland after the defeat of Nazi Germany in 1945. There is here the Museum of Kashubian and Pomeranian Writing and Music.

Wejherowo is twinned
Town twinning
Twin towns and sister cities are two of many terms used to describe the cooperative agreements between towns, cities, and even counties in geographically and politically distinct areas to promote cultural and commercial ties.- Terminology :...
with: Tyresö (Sweden
Sweden
Sweden , officially the Kingdom of Sweden , is a Nordic country on the Scandinavian Peninsula in Northern Europe. Sweden borders with Norway and Finland and is connected to Denmark by a bridge-tunnel across the Öresund....
) Rouen
Rouen
Rouen , in northern France on the River Seine, is the capital of the Haute-Normandie region and the historic capital city of Normandy. Once one of the largest and most prosperous cities of medieval Europe , it was the seat of the Exchequer of Normandy in the Middle Ages...
(France
France
The French Republic , The French Republic , The French Republic , (commonly known as France , is a unitary semi-presidential republic in Western Europe with several overseas territories and islands located on other continents and in the Indian, Pacific, and Atlantic oceans. Metropolitan France...
) Święciany (Lithuania
Lithuania
Lithuania , officially the Republic of Lithuania is a country in Northern Europe, the biggest of the three Baltic states. It is situated along the southeastern shore of the Baltic Sea, whereby to the west lie Sweden and Denmark...
) Postawy
Pastavy
Pastavy is a city in the Vitsebsk Voblast of Belarus, an administrative center of the Pastavy district. In 2009, Pastavy celebrated its 600th anniversary.-External links:* *...
(Belarus
Belarus
Belarus , officially the Republic of Belarus, is a landlocked country in Eastern Europe, bordered clockwise by Russia to the northeast, Ukraine to the south, Poland to the west, and Lithuania and Latvia to the northwest. Its capital is Minsk; other major cities include Brest, Grodno , Gomel ,...
) Iwano-Frankowsk (Ukraine
Ukraine
Ukraine is a country in Eastern Europe. It has an area of 603,628 km², making it the second largest contiguous country on the European continent, after Russia...
) Trutnov
Trutnov
Trutnov is a city in the Hradec Králové Region of the Czech Republic. It has a population of 31,239 and lies in the Krkonoše in the valley of the Úpa River....
(Czech Republic
Czech Republic
The Czech Republic is a landlocked country in Central Europe. The country is bordered by Poland to the northeast, Slovakia to the east, Austria to the south, and Germany to the west and northwest....
)