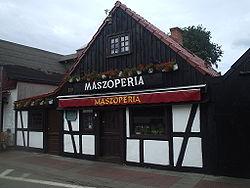 Hel Peninsula is a 35-km-long sand bar peninsula
Peninsula
A peninsula is a piece of land that is bordered by water on three sides but connected to mainland. In many Germanic and Celtic languages and also in Baltic, Slavic and Hungarian, peninsulas are called "half-islands"....
in northern Poland
Poland
Poland , officially the Republic of Poland , is a country in Central Europe bordered by Germany to the west; the Czech Republic and Slovakia to the south; Ukraine, Belarus and Lithuania to the east; and the Baltic Sea and Kaliningrad Oblast, a Russian exclave, to the north...
separating the Bay of Puck
Bay of Puck
The Bay of Puck or Puck Bay , historically also known as the Bay of Putzig , is a shallow western branch of the Bay of Gdańsk in the southern Baltic Sea, off the shores of Gdańsk Pomerania, Poland. It is separated from the open sea by the Hel Peninsula.The bay has an average depth of 2-6 metres...
from the open Baltic Sea
Baltic Sea
The Baltic Sea is a brackish mediterranean sea located in Northern Europe, from 53°N to 66°N latitude and from 20°E to 26°E longitude. It is bounded by the Scandinavian Peninsula, the mainland of Europe, and the Danish islands. It drains into the Kattegat by way of the Øresund, the Great Belt and...
. It is located in Puck County
Puck County
Puck County is a unit of territorial administration and local government in Pomeranian Voivodeship, northern Poland, on the Baltic coast. It came into being on January 1, 1999, as a result of the Polish local government reforms passed in 1998. Its administrative seat is the town of Puck, which...
of the Pomeranian Voivodeship
Pomeranian Voivodeship
Pomeranian Voivodeship, or Pomerania Province , is a voivodeship, or province, in north-central Poland. It comprises most of Pomerelia , as well as an area east of the Vistula River...
.

The width of the peninsula varies from approximately 300 m. near Jurata
Jurata
Jurata - popular Polish sea side resort, part of the town of Jastarnia. Located on the Hel Peninsula in forested area between Jastarnia and Hel, on the Baltic Sea, Puck County, Pomeranian Voivodeship.-History:...
, through 100 m in the most narrow part to over 3 km at the tip. Since the peninsula was formed entirely of sand
Sand
Sand is a naturally occurring granular material composed of finely divided rock and mineral particles.The composition of sand is highly variable, depending on the local rock sources and conditions, but the most common constituent of sand in inland continental settings and non-tropical coastal...
, it is frequently turned into an island by winter storms. Until the 17th century the peninsula was a chain of islands that formed a strip of land only during the summer.

A road and a railroad run along the peninsula from the mainland to the town located at the furthest point, Hel
Hel, Poland
Hel is a town in Puck County, Pomeranian Voivodeship, Poland, located on the tip of the Hel Peninsula, some 33 kilometres from the Polish mainland.-Early developments:...
, a popular tourist destination. Other towns, ports, and tourist resorts are Jurata
Jurata
Jurata - popular Polish sea side resort, part of the town of Jastarnia. Located on the Hel Peninsula in forested area between Jastarnia and Hel, on the Baltic Sea, Puck County, Pomeranian Voivodeship.-History:...
, Jastarnia
Jastarnia
Jastarnia is a small town in Puck County, Pomeranian Voivodship, northern Poland. It is located on the Hel Peninsula on the Baltic Sea. Popular Polish seaside resort and small fishing port....
, Kuźnica
Kuznica
Kuźnica is a popular Polish sea side resort, a part of the town of Jastarnia. Located between Chałupy and Jastarnia on the Hel Peninsula on the southern Baltic Sea in Puck County, Pomeranian Voivodeship, northern Poland....
, Chałupy, and Władysławowo
Władysławowo
Władysławowo is a town on the south coast of the Baltic Sea in the Kashubia in Eastern Pomerania region, northern Poland, with 15,015 inhabitants.-Overview:...
.

After the peninsula became part of the Second Polish Republic
Second Polish Republic
The Second Polish Republic, Second Commonwealth of Poland or interwar Poland refers to Poland between the two world wars; a period in Polish history in which Poland was restored as an independent state. Officially known as the Republic of Poland or the Commonwealth of Poland , the Polish state was...
after World War I
World War I
World War I , which was predominantly called the World War or the Great War from its occurrence until 1939, and the First World War or World War I thereafter, was a major war centred in Europe that began on 28 July 1914 and lasted until 11 November 1918...
, it acquired considerable military significance, and was turned into a fortified region, with a garrison of about 3,000. In the course of the Battle of Hel
Battle of Hel
The Battle of Hel was one of the longest battles of the Invasion of Poland during World War II.The Hel Peninsula, together with the town of Hel, was the pocket of Polish Army resistance that held out the longest against the German invasion...
in 1939, Polish forces dynamite
Dynamite
Dynamite is an explosive material based on nitroglycerin, initially using diatomaceous earth , or another absorbent substance such as powdered shells, clay, sawdust, or wood pulp. Dynamites using organic materials such as sawdust are less stable and such use has been generally discontinued...
d the peninsula at one point, turning it into an island.

During the years of German occupation
Nazi Germany
Nazi Germany , also known as the Third Reich , but officially called German Reich from 1933 to 1943 and Greater German Reich from 26 June 1943 onward, is the name commonly used to refer to the state of Germany from 1933 to 1945, when it was a totalitarian dictatorship ruled by...
(1939–1945), Hel's defenses were further expanded, and a battery of three 40.6 cm SK C/34 gun was constructed, though the guns were soon moved to the Atlantic Wall
Atlantic Wall
The Atlantic Wall was an extensive system of coastal fortifications built by Nazi Germany between 1942 and 1944 along the western coast of Europe as a defense against an anticipated Allied invasion of the mainland continent from Great Britain.-History:On March 23, 1942 Führer Directive Number 40...
in occupied France
France
The French Republic , The French Republic , The French Republic , (commonly known as France , is a unitary semi-presidential republic in Western Europe with several overseas territories and islands located on other continents and in the Indian, Pacific, and Atlantic oceans. Metropolitan France...
. The peninsula remained in German hands until the end of World War II
World War II
World War II, or the Second World War , was a global conflict lasting from 1939 to 1945, involving most of the world's nations—including all of the great powers—eventually forming two opposing military alliances: the Allies and the Axis...
, when the defending forces surrendered on May 10, 1945.

After the war Hel continued to have military significance, with much of its area reserved for military use. Additional gun batteries were built during the 1940s and 1950s. Today many of the fortifications and batteries are open to tourists, though some areas of the peninsula still belong to the Polish Armed Forces
Polish Armed Forces
Siły Zbrojne Rzeczypospolitej Polskiej are the national defense forces of Poland...
.

During an episode of the cartoon Metalocalypse
Metalocalypse
Metalocalypse is an American animated television series, created by Brendon Small and Tommy Blacha, which premiered on August 6, 2006 on Adult Swim...
, members of the band Dethklok perform a concert near the Hel Peninsula, the episode states they play the concert "near Danzig."