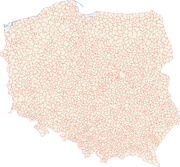 The gmina is the principal unit of administrative division of Poland
Poland
Poland , officially the Republic of Poland , is a country in Central Europe bordered by Germany to the west; the Czech Republic and Slovakia to the south; Ukraine, Belarus and Lithuania to the east; and the Baltic Sea and Kaliningrad Oblast, a Russian exclave, to the north...
at its lowest uniform level. It is often translated as "commune" or "municipality
Municipality
A municipality is essentially an urban administrative division having corporate status and usually powers of self-government. It can also be used to mean the governing body of a municipality. A municipality is a general-purpose administrative subdivision, as opposed to a special-purpose district...
." As of 2010 there were 2,479 gminas throughout the country. The word gmina derives from the German
German language
German is a West Germanic language, related to and classified alongside English and Dutch. With an estimated 90 – 98 million native speakers, German is one of the world's major languages and is the most widely-spoken first language in the European Union....
word Gemeinde, meaning "community."

The gmina has been the basic unit of territorial division in Poland since 1972, when it replaced the smaller gromada
Gromada
Gromada is a Polish word meaning "gathering", "group", or "assembly". In the Polish-Lithuanian Commonwealth, the term referred to a village organization which embraced all the inhabitants of a village and acted as a local authority, as well as overseeing tax payments. In this sense the gromada...
(cluster). There are three types of gminas in Poland:
Some rural gminas have their seat in a town
Town
A town is a human settlement larger than a village but smaller than a city. The size a settlement must be in order to be called a "town" varies considerably in different parts of the world, so that, for example, many American "small towns" seem to British people to be no more than villages, while...
which is outside the gmina's division. For example, the rural Gmina Augustów
Gmina Augustów
Gmina Augustów is a rural gmina in Augustów County, Podlaskie Voivodeship, in north-eastern Poland. Its seat is the town of Augustów, although the town is not part of the territory of the gmina....
is administered from the town of Augustów
Augustów
Augustów is a town in north-eastern Poland with 29,600 inhabitants . It lies on the Netta River and the Augustów Canal. It is situated in the Podlaskie Voivodeship , having previously been in Suwałki Voivodeship . It is the seat of Augustów County and of Gmina Augustów.In 1970 Augustów became...
, but does not include the town, as Augustów is an urban type gmina in its own right.

An urban gmina is normally referred to only, by the name of the city or town in question. Other types of gminas are called "Gmina X", where "X" (in the vast majority of cases) is the name of town or village in which the gmina has its seat. Term "Gmina X" featuring the name of settlement is sometimes translated into English as "X Commune".

The legislative and controlling body of each gmina is the elected municipal council (rada gminy), or in a town: rada miasta (town assembly). Executive power is held by the directly elected mayor
Mayor
In many countries, a Mayor is the highest ranking officer in the municipal government of a town or a large urban city....
of the municipality, called wójt in rural gminas, burmistrz in most urban and urban-rural gminas, or prezydent in towns with more than 100,000 inhabitants and some others which traditionally use the title. A gmina may create auxiliary units (jednostki pomocnicze), which play a subordinate administrative role. In rural areas these are called sołectwos; in towns they may be dzielnica
Dzielnica
In the Polish system of local administration, a dzielnica is an administrative subdivision or quarter of a city or town. A dzielnica may have its own elected council , and those of Warsaw each have their own mayor...
s or osiedle
Osiedle
Osiedle is a term used in Poland to denote a designated subdivision of a city or town, or of a dzielnica, with its own council and executive. Like the dzielnica and sołectwo, an osiedle is an auxiliary unit of a gmina. These units are created by decision of the gmina council, and do not have...
s. In an urban-rural gmina, the town itself may be designated as an auxiliary unit. For a complete listing of all the gminas in Poland, see List of Polish gminas.


Types of administrative tasks and objectives

Each gmina carries out two types of tasks: its own tasks, and commissioned ones. Own tasks are public tasks exercised by self-government, which serve to satisfy the needs of the community. The tasks can be twofold:

Own objectives include a variety of matters such as: the spatial harmony, the real estate management, the environmental protection and nature conservation, the water management, country roads, public streets, bridges, squares and traffic systems, water supply systems and source, the sewage system, removal of urban waste, water treatment, maintenance of cleanliness and order, sanitary facilities, dumps and council waste, supply of electric and thermal energy and gas, public transport, health care, welfare, care homes, subsidized housing, public education, cultural facilities including public libraries and other cultural institutions, historic monuments conservation and protection, the sports facilities and tourism including recreational grounds and devices; marketplaces and covered markets, green spaces and public parks, communal graveyards, public order and safety, fire and flood protection with equipment maintenance and storage, maintaining objects and devices of the public utility and administrative buildings, pro-family policy including social support for pregnant women, medical and legal care, supporting and popularizing the self-government initiatives and cooperation within the commune including with non-governmental organizations, interaction with regional communities from other countries etc.


Overall number of gminas by type


Gmina Pisz
Gmina Pisz
Gmina Pisz is an urban-rural gmina in Pisz County, Warmian-Masurian Voivodeship, in northern Poland. Its seat is the town of Pisz, which lies approximately east of the regional capital Olsztyn....
: rural part (623.61) Gmina Świątniki Górne
Gmina Swiatniki Górne
Gmina Świątniki Górne is an urban-rural gmina in Kraków County, Lesser Poland Voivodeship, in southern Poland. Its seat is the town of Świątniki Górne, which lies approximately south of the regional capital Kraków....
: rural part (407.86)
>-
! SMALLEST !! Population (2006 estimate) !! Land area in km² !! Population density
per km²
|-
! Urban
| Krynica Morska
Krynica Morska
Krynica Morska is a town and coextensive municipality on the Vistula Spit in northern Poland with 1,364 inhabitants . It has been a part of Nowy Dwór Gdański County in Pomeranian Voivodeship since 1999; previously it was in Elbląg Voivodeship...
(1,364)


Gmina Stawiszyn
Gmina Stawiszyn
Gmina Stawiszyn is an urban-rural gmina in Kalisz County, Greater Poland Voivodeship, in west-central Poland. Its seat is the town of Stawiszyn, which lies approximately north of Kalisz and south-east of the regional capital Poznań....
: Stawiszyn
Stawiszyn
Stawiszyn is a town in Kalisz County, Greater Poland Voivodeship, Poland, with 1,569 inhabitants . It is the urban part of the larger Stawiszyn Commune, a mixed urban-rural municipality . The town has a land area of only 0.99 km², and is the smallest town in geographical area in...
(0.99) Suraż
Suraz
Suraż is a town in north-eastern Poland situated in the Podlaskie Voivodeship since 1999 and, from 1975 to 1998, in the Białystok Voivodeship .- Buildings and structures :...
(28.94)
>-
! Rural part of urban-rural gmina
| Gmina Nowe Warpno
Gmina Nowe Warpno
Gmina Nowe Warpno is an urban-rural gmina in Police County, West Pomeranian Voivodeship, in north-western Poland, on the German border...
: rural part (363)