The Pindus mountain range is located in northern Greece
Greece
Greece , officially the Hellenic Republic , and historically Hellas or the Republic of Greece in English, is a country in southeastern Europe....
and southern Albania
Albania
Albania , officially known as the Republic of Albania , is a country in Southeastern Europe, in the Balkans region. It is bordered by Montenegro to the northwest, Kosovo to the northeast, the Republic of Macedonia to the east and Greece to the south and southeast. It has a coast on the Adriatic Sea...
. It is roughly 160 km long, with a maximum elevation of 2637 m (Mount Smolikas
Smolikas
Mount Smolikas , also with the o accented , at a height of 2,637 metres above sea level, is the second highest mountain in Greece, after Mount Olympus, and the highest of the Pindus Mountains. The mountain is formed in ophiolite rocks. During the Pleistocene the northern and eastern cirques and...
). Because it runs along the border of Thessaly
Thessaly
Thessaly is a traditional geographical region and an administrative region of Greece, comprising most of the ancient region of the same name. Before the Greek Dark Ages, Thessaly was known as Aeolia, and appears thus in Homer's Odyssey....
and Epirus
Epirus
The name Epirus, from the Greek "Ήπειρος" meaning continent may refer to:-Geographical:* Epirus - a historical and geographical region of the southwestern Balkans, straddling modern Greece and Albania...
, the Pindus range is often called the "spine of Greece". The mountain range stretches from near the Greek-Albanian borders in Northern Epirus
Northern Epirus
Northern Epirus is a term used to refer to those parts of the historical region of Epirus, in the western Balkans, that are part of the modern Albania. The term is used mostly by Greeks and is associated with the existence of a substantial ethnic Greek population in the region...
, entering the Epirus
Epirus (region)
Epirus is a geographical and historical region in southeastern Europe, shared between Greece and Albania. It lies between the Pindus Mountains and the Ionian Sea, stretching from the Bay of Vlorë in the north to the Ambracian Gulf in the south...
region and Macedonia
Macedonia (Greece)
Macedonia is a geographical and historical region of Greece in Southern Europe. Macedonia is the largest and second most populous Greek region...
region in northern Greece down to the north of the Peloponnese
Peloponnese
The Peloponnese, Peloponnesos or Peloponnesus , is a large peninsula , located in a region of southern Greece, forming the part of the country south of the Gulf of Corinth...
.

The Pindus ecoregion covers a wide range of elevations and habitats, from deep canyon
Canyon
A canyon or gorge is a deep ravine between cliffs often carved from the landscape by a river. Rivers have a natural tendency to reach a baseline elevation, which is the same elevation as the body of water it will eventually drain into. This forms a canyon. Most canyons were formed by a process of...
s to steep mountains. The wide range in altitude results in two major forest zones:

Large breeding colonies of heron
Heron
The herons are long-legged freshwater and coastal birds in the family Ardeidae. There are 64 recognised species in this family. Some are called "egrets" or "bitterns" instead of "heron"....
s, spoonbill
Spoonbill
Spoonbills are a group of large, long-legged wading birds in the family Threskiornithidae, which also includes the Ibises.All have large, flat, spatulate bills and feed by wading through shallow water, sweeping the partly opened bill from side to side...
s, egret
Egret
An egret is any of several herons, most of which are white or buff, and several of which develop fine plumes during the breeding season. Many egrets are members of the genera Egretta or Ardea which contain other species named as herons rather than egrets...
s, and pelican
Pelican
A pelican, derived from the Greek word πελεκυς pelekys is a large water bird with a large throat pouch, belonging to the bird family Pelecanidae....
s fish the cool waters of the mountain lakes of the Pindus Mountain Conifer
Temperate coniferous forests
Temperate coniferous forest is a terrestrial biome found in temperate regions of the world with warm summers and cool winters and adequate rainfall to sustain a forest. In most temperate coniferous forests, evergreen conifers predominate, while some are a mix of conifers and broadleaf evergreen...
and Broadleaf Mixed Forests
Temperate broadleaf and mixed forests
Mixed forests are a temperate and humid biome. The typical structure of these forests includes four layers. The uppermost layer is the canopy composed of tall mature trees ranging from 33 to 66 m high. Below the canopy is the three-layered, shade-tolerant understory that is roughly 9 to...
ecoregion. This is one of the few areas in Europe where the rare Dalmatian pelican
Dalmatian Pelican
The Dalmatian Pelican is a member of the pelican family. It breeds from southeastern Europe to India and China in swamps and shallow lakes. The nest is a crude heap of vegetation....
can be found. Wolves, jackal
Jackal
Although the word jackal has been historically used to refer to many small- to medium-sized species of the wolf genus of mammals, Canis, today it most properly and commonly refers to three species: the black-backed jackal and the side-striped jackal of sub-Saharan Africa, and the golden jackal of...
s, and bear
Bear
Bears are mammals of the family Ursidae. Bears are classified as caniforms, or doglike carnivorans, with the pinnipeds being their closest living relatives. Although there are only eight living species of bear, they are widespread, appearing in a wide variety of habitats throughout the Northern...
s are found in the forests.

The forests of this ecoregion have faced many threats over the course of human history, including overgrazing
Overgrazing
Overgrazing occurs when plants are exposed to intensive grazing for extended periods of time, or without sufficient recovery periods. It can be caused by either livestock in poorly managed agricultural applications, or by overpopulations of native or non-native wild animals.Overgrazing reduces the...
, agriculture, and deforestation
Deforestation
Deforestation is the removal of a forest or stand of trees where the land is thereafter converted to a nonforest use. Examples of deforestation include conversion of forestland to farms, ranches, or urban use....
. The greatest threats now come from the development of mountain tourism and ski resort
Ski resort
A ski resort is a resort developed for skiing and other winter sports. In Europe a ski resort is a town or village in a ski area - a mountainous area, where there are ski trails and supporting services such as hotels and other accommodation, restaurants, equipment rental and a ski lift system...
s. Because of the instability of the soil on steep mountains, road-building and clear-cutting operations have led to dangerous landslides and the collapse of mountain slopes. Mining for bauxite
Bauxite
Bauxite is an aluminium ore and is the main source of aluminium. This form of rock consists mostly of the minerals gibbsite Al3, boehmite γ-AlO, and diaspore α-AlO, in a mixture with the two iron oxides goethite and hematite, the clay mineral kaolinite, and small amounts of anatase TiO2...
, overgrazing, and over-collection of plants are also threatening the great biodiversity of this ecoregion.

The Vikos-Aoos National Park is south of the town of Konitsa
Konitsa
Konitsa is a town in Epirus, Greece, near the Albanian border. It lies amphi-theatre shaped on a mountain slope of the Pindos mountain range, overlooking the valley where the river Aoos meets the river Voidomatis. The valley is used for farming. Konitsa is a regional centre for many small Pindos...
, in the west part of Zagori
Zagori
Zagori , is a region and a municipality in the Pindus mountains in Epirus, in northwestern Greece. The seat of the municipality is the village Asprangeloi. It has an area of some 1,000 square kilometres and contains 45 villages known as Zagoria , and is in the shape of an upturned equilateral...
region. It includes Mount Tymfi
Tymfi
Tymfi or Mt Tymphe, Timfi, also Tymphi is a mountain in the northern Pindus mountain range, northwestern Greece. It is part of the regional unit of Ioannina and lies in the region of Zagori, just a few meters south of the 40° parallel...
, the Vikos Gorge
Vikos Gorge
The Vikos Gorge is a gorge in the Pindus Mountains of northern Greece. It lies on the southern slopes of Mount Tymfi, with a length of about 20 km, depth ranging from 450 m to 1600 m and width from 400 m to some meters at its narrowest part....
and the Aoos Gorge. It was created in 1973.

The Pindus National Park (also known as Valia Kalda) is in a remote area in the north east of the Pindus mountains, north of the town of Metsovo
Metsovo
Metsovo is a town in Epirus on the mountains of Pindus in northern Greece, between Ioannina to the north and Meteora to the south. The largest centre of Vlach life in Greece, Metsovo is bypassed by GR-6 and also by Egnatia Odos Motorway....
and south of Perivoli. The park of some 7,000 hectares was established in 1966. There are forests of black pine
European Black Pine
Pinus nigra, the European Black Pine, is a moderately variable species of pine, occurring across southern Mediterranean Europe from Spain to the Crimea, in Asia Minor and on Cyprus, and in the high mountains of the Maghreb in North Africa....
and beech
Beech
Beech is a genus of ten species of deciduous trees in the family Fagaceae, native to temperate Europe, Asia and North America.-Habit:...
, and in the higher parts, Bosnian Pine
Bosnian Pine
The Bosnian Pine is a species of pine native to Bosnia but is also found in the mountains of southeastern Europe, in southwestern Bulgaria, Bosnia, Albania, the Republic of Macedonia, Serbia, northern Greece , and locally in southern Italy ,...
(Pinus leucodermis). The park is a refuge for bear
Bear
Bears are mammals of the family Ursidae. Bears are classified as caniforms, or doglike carnivorans, with the pinnipeds being their closest living relatives. Although there are only eight living species of bear, they are widespread, appearing in a wide variety of habitats throughout the Northern...
, wild cat
Wild cat
The wildcat is a small cat with several subspecies and a very broad distribution, found throughout most of Africa, Europe, and southwest and central Asia into India, China, and Mongolia. It is a hunter of small mammals, birds, and other creatures of a similar or smaller size. Sometimes included is...
and lynx
Lynx
A lynx is any of the four Lynx genus species of medium-sized wildcats. The name "lynx" originated in Middle English via Latin from Greek word "λύγξ", derived from the Indo-European root "*leuk-", meaning "light, brightness", in reference to the luminescence of its reflective eyes...
. 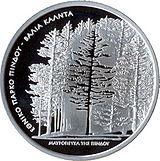 The National Park was selected as main motif for two high value euro collectors' coins: the €10 Greek Birds and Flowers and Black Pine Trees commemorative coins, minted in 2007. On the obverse of one of the coins there is a panoramic view of the common black pine trees that are prevalent in the park.