Encyclopedia
The pilot fish is a carnivorous commensal fish in the family Carangidae
Carangidae
Carangidae is a family of fish which includes the jacks, pompanos, jack mackerels, and scads.They are marine fish found in the Atlantic, Indian and Pacific Oceans...
. It is widely distributed and lives in warm or tropical open seas.

The pilot fish congregates around shark
Shark
Sharks are a type of fish with a full cartilaginous skeleton and a highly streamlined body. The earliest known sharks date from more than 420 million years ago....
s, rays
Batoidea
Batoidea is a superorder of cartilaginous fish commonly known as rays and skates, containing more than 500 described species in thirteen families...
, and sea turtles, where it eats ectoparasites on, and leftovers around the host species; younger pilot fish are usually associated with jellyfish and drifting seaweeds. They are also known to follow ships, sometimes for long distances; one was found in County Cork
County Cork
County Cork is a county in Ireland. It is located in the South-West Region and is also part of the province of Munster. It is named after the city of Cork . Cork County Council is the local authority for the county...
, Ireland
Ireland
Ireland is an island to the northwest of continental Europe. It is the third-largest island in Europe and the twentieth-largest island on Earth...
, and many pilot fish have been sighted on the shores of England
England
England is a country that is part of the United Kingdom. It shares land borders with Scotland to the north and Wales to the west; the Irish Sea is to the north west, the Celtic Sea to the south west, with the North Sea to the east and the English Channel to the south separating it from continental...
. Their fondness for ships led the ancients to believe that they would navigate a ship to its desired course.

The pilot fish is of a dark blue to blackish-silver colour, with the belly being lighter in colour. The pilot fish is also known to have a temporary variation of colour when excited; its dark-coloured bars disappear, and its body turns a silvery-white colour, with three broad blue patches on its back. It is easily recognisable by its distinctive traverse bands, which are of a much darker colour than the rest of the body, and number between five and seven. The pilot fish can grow up to 60–70 cm in length.

The pilot fish is harmless to human beings and is said to be good eating; however, the fish is difficult to land because of its erratic behaviour when caught. 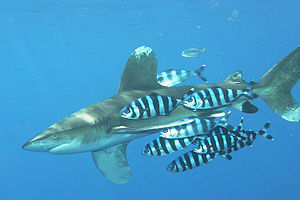 While pilot fish can be seen with all manner of sharks, they are said to prefer accompanying the oceanic whitetip
Oceanic whitetip shark
The oceanic whitetip shark, Carcharhinus longimanus, is a large pelagic shark inhabiting tropical and warm temperate seas. Its stocky body is most notable for its long, white-tipped, rounded fins....
, Carcharhinus longimanus. The pilot fish's relationship with sharks is a mutualist one; the pilot fish gains protection from predators, while the shark gains freedom from parasites. It was often said by sailor
Sailor
A sailor, mariner, or seaman is a person who navigates water-borne vessels or assists in their operation, maintenance, or service. The term can apply to professional mariners, military personnel, and recreational sailors as well as a plethora of other uses...
s that sharks and pilot fish share something like a "close companionship"; there were even tales of this fish following ships which had captured "their" shark for up to six weeks and showing signs of distress in its absence.

Whatever the veracity of such reports, it is extremely rare that a shark will feed on a pilot fish, and smaller pilot fish are frequently observed swimming into sharks' mouths to clean away fragments of food from between their teeth. As Herman Melville
Herman Melville
Herman Melville was an American novelist, short story writer, essayist, and poet. He is best known for his novel Moby-Dick and the posthumous novella Billy Budd....
put it,
These observations have led to the pilot fish's distinctive markings being copied for decal
Decal
A decal or transfer is a plastic, cloth, paper or ceramic substrate that has printed on it a pattern or image that can be moved to another surface upon contact, usually with the aid of heat or water. The word is short for decalcomania...
s supplied as shark protection for surfboard
Surfboard
A surfboard is an elongated platform used in the sport of surfing. Surfboards are relatively light, but are strong enough to support an individual standing on them while riding a breaking wave...
s.

There are a few possible, conflicting etymologies for the term "pilot fish". One is that sea-faring people believed that pilot fish, which would appear around the bow
Bow (ship)
The bow is a nautical term that refers to the forward part of the hull of a ship or boat, the point that is most forward when the vessel is underway. Both of the adjectives fore and forward mean towards the bow...
of their ships when they were close to land, were leading (or piloting) them back to port. An alternative etymology is that pilot fish were once, erroneously, thought to be piloting sharks to food, or even (as legends have it) piloting ships, whales and swimmers to safety.

In this latter sense, the pilot fish is sometimes used as a metaphor
Metaphor
A metaphor is a literary figure of speech that uses an image, story or tangible thing to represent a less tangible thing or some intangible quality or idea; e.g., "Her eyes were glistening jewels." Metaphor may also be used for any rhetorical figures of speech that achieve their effects via...
or simile
Simile
A simile is a figure of speech that directly compares two different things, usually by employing the words "like", "as". Even though both similes and metaphors are forms of comparison, similes indirectly compare the two ideas and allow them to remain distinct in spite of their similarities, whereas...
; "they are like the pilot fish to the shark, serving to lead him to his victim". In a vaguely similar vein, Ernest Hemingway
Ernest Hemingway
Ernest Miller Hemingway was an American author and journalist. His economic and understated style had a strong influence on 20th-century fiction, while his life of adventure and his public image influenced later generations. Hemingway produced most of his work between the mid-1920s and the...
uses the term "pilot fish" in his memoirs (A Moveable Feast
A Moveable Feast
A Moveable Feast is a set of memoirs by American author Ernest Hemingway about his years in Paris as part of the American expatriate circle of writers in the 1920s. The book describes Hemingway's apprenticeship as a young writer in Europe during the 1920s with his first wife, Hadley...
) to refer to the scouts that rich people send out to check on artists to see if they are the next big thing. Pilot fish are also used as a metaphor or simile for scavengers or looters which accompany a greater threat; in this sense, the term "pilot fish" was applied to a group of extraterrestrial robots that heralded the imminent appearance of a much greater threat (the "shark") in The Christmas Invasion
The Christmas Invasion
"The Christmas Invasion" is a 60-minute special episode of the British science fiction television series Doctor Who. It is Christmas, but there is little cause for celebration as planet Earth is invaded by aliens known as the Sycorax...
, the 2005 Christmas Special of the BBC
BBC
The British Broadcasting Corporation is a British public service broadcaster. Its headquarters is at Broadcasting House in the City of Westminster, London. It is the largest broadcaster in the world, with about 23,000 staff...
television show Doctor Who
Doctor Who
Doctor Who is a British science fiction television programme produced by the BBC. The programme depicts the adventures of a time-travelling humanoid alien known as the Doctor who explores the universe in a sentient time machine called the TARDIS that flies through time and space, whose exterior...
.