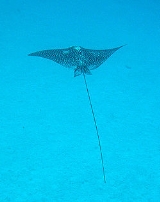 Encyclopedia
Batoidea is a superorder of cartilaginous fish
Chondrichthyes
Chondrichthyes or cartilaginous fishes are jawed fish with paired fins, paired nares, scales, two-chambered hearts, and skeletons made of cartilage rather than bone...
commonly known as rays and skate
Skate
Skates are cartilaginous fish belonging to the family Rajidae in the superorder Batoidea of rays. There are more than 200 described species in 27 genera. There are two subfamilies, Rajinae and Arhynchobatinae ....
s, containing more than 500 described species in thirteen families. They are closely related to shark
Shark
Sharks are a type of fish with a full cartilaginous skeleton and a highly streamlined body. The earliest known sharks date from more than 420 million years ago....
s, from which they can be distinguished by their flattened bodies, enlarged pectoral fins that are fused to the head, and gill slit
Gill slit
Gill slits are individual openings to gills, i.e., multiple gill arches, which lack a single outer cover. Such gills are characteristic of Cartilaginous fish such as sharks, rays, sawfish, and guitarfish. Most of these have five pairs, but a few species have 6 or 7 pairs...
s that are placed on their ventral surfaces.

Batoids are flat-bodied, and, like sharks, are a species of cartilaginous marine fish
Chondrichthyes
Chondrichthyes or cartilaginous fishes are jawed fish with paired fins, paired nares, scales, two-chambered hearts, and skeletons made of cartilage rather than bone...
, meaning they have a boneless skeleton
Skeleton
The skeleton is the body part that forms the supporting structure of an organism. There are two different skeletal types: the exoskeleton, which is the stable outer shell of an organism, and the endoskeleton, which forms the support structure inside the body.In a figurative sense, skeleton can...
made of a tough, elastic substance. Most batoids have five ventral slot-like body openings called gill slits that lead from the gills, but the Hexatrygonidae have six. Batoid gill slits lie under the pectoral fins on the underside, whereas a shark's are on the sides of the head. Most batoids have a flat, disk-like body, with the exception of the guitarfish
Guitarfish
The guitarfish are a family, Rhinobatidae, of rays. The guitarfish are known for an elongated body with a flattened head and trunk and small ray like wings. The combined range of the various species is tropical, subtropical and temperate waters worldwide. They often travel in large...
es and sawfishes, while most sharks have a streamlined body. Many species of batoid have developed their pectoral fins into broad flat wing-like appendages. The anal fin is absent. The eyes and spiracle
Spiracle
Spiracles are openings on the surface of some animals that usually lead to respiratory systems.-Vertebrates:The spiracle is a small hole behind each eye that opens to the mouth in some fishes. In the primitive jawless fish the first gill opening immediately behind the mouth is essentially similar...
s are located on top of the head. Batoids have a ventrally located mouth and can considerably protrude their upper jaw (palatoquadrate cartilage) away from the cranium to capture prey. The jaws have euhyostylic type suspension, which relies completely on the hyomandibular cartilages for support.

The eggs of skates are laid in leathery egg cases that are commonly known as mermaid's purse
Mermaid's purse
An egg case or egg capsule, colloquially known as a mermaid's purse or devil's purse, is a casing that surrounds the fertilized eggs of some sharks, skates, and chimaeras. They are among the common objects which are washed up by the sea. They are made of collagen protein strands...
s and which often wash up empty on beaches in areas where skates are common.

Most species live on the sea floor, in a variety of geographical regions - many in coastal waters, few live in deep waters to at least 3000 metres (9,842.5 ft), most batoids have a somewhat cosmopolitan distribution
Cosmopolitan distribution
In biogeography, a taxon is said to have a cosmopolitan distribution if its range extends across all or most of the world in appropriate habitats. For instance, the killer whale has a cosmopolitan distribution, extending over most of the world's oceans. Other examples include humans, the lichen...
, in tropical and subtropical marine environments, temperate or cold-water species. Only a few species, like manta ray
Manta ray
The manta ray is the largest species of the rays. The largest known specimen was more than across, with a weight of about . It ranges throughout waters of the world, typically around coral reefs...
s, live in the open sea, and only a few live in freshwater. Some batoids can live in brackish bays and estuaries. Bottom-dwelling batoids breathe by taking water in through the spiracle
Spiracle
Spiracles are openings on the surface of some animals that usually lead to respiratory systems.-Vertebrates:The spiracle is a small hole behind each eye that opens to the mouth in some fishes. In the primitive jawless fish the first gill opening immediately behind the mouth is essentially similar...
s, rather than through the mouth as most fishes do, and passing it outward through the gills.

Most batoids have developed heavy, rounded teeth for crushing the shells of bottom-dwelling species such as snails, clams
CLaMS
CLaMS is a modular chemistry transport model system developed at Forschungszentrum Jülich, Germany. CLaMS was first described by McKenna et al. and was expanded into three dimensions by Konopka et al....
, oysters, crustacean
Crustacean
Crustaceans form a very large group of arthropods, usually treated as a subphylum, which includes such familiar animals as crabs, lobsters, crayfish, shrimp, krill and barnacles. The 50,000 described species range in size from Stygotantulus stocki at , to the Japanese spider crab with a leg span...
s, and some fish
Fish
Fish are a paraphyletic group of organisms that consist of all gill-bearing aquatic vertebrate animals that lack limbs with digits. Included in this definition are the living hagfish, lampreys, and cartilaginous and bony fish, as well as various extinct related groups...
, depending on the species. Manta ray
Manta ray
The manta ray is the largest species of the rays. The largest known specimen was more than across, with a weight of about . It ranges throughout waters of the world, typically around coral reefs...
s feed on plankton
Plankton
Plankton are any drifting organisms that inhabit the pelagic zone of oceans, seas, or bodies of fresh water. That is, plankton are defined by their ecological niche rather than phylogenetic or taxonomic classification...
.

The classification of batoids is currently undergoing revision; however, molecular evidence refutes the hypothesis that skates and rays are derived sharks. Nelson's 2006 Fishes of the World recognizes four orders. The Mesozoic
Mesozoic
The Mesozoic era is an interval of geological time from about 250 million years ago to about 65 million years ago. It is often referred to as the age of reptiles because reptiles, namely dinosaurs, were the dominant terrestrial and marine vertebrates of the time...
Sclerorhynchoidea are basal or incertae sedis
Incertae sedis
, is a term used to define a taxonomic group where its broader relationships are unknown or undefined. Uncertainty at specific taxonomic levels is attributed by , , and similar terms.-Examples:*The fossil plant Paradinandra suecica could not be assigned to any...
; they show features of the Rajiformes but have snouts resembling those of sawfishes.

The electric rays have electric organ
Electric organ
In biology, the electric organ is an organ common to all electric fish used for the purposes of creating an electric field. The electric organ is derived from modified nerve or muscle tissue...
s in their pectoral fin discs that generate electric current
Electric current
Electric current is a flow of electric charge through a medium.This charge is typically carried by moving electrons in a conductor such as wire...
. They are used to immobilize prey and for defense. The current is strong enough to stun humans, and the ancient Greeks and Roman
Ancient Rome
Ancient Rome was a thriving civilization that grew on the Italian Peninsula as early as the 8th century BC. Located along the Mediterranean Sea and centered on the city of Rome, it expanded to one of the largest empires in the ancient world....
s used these fish to treat ailments such as headache
Headache
A headache or cephalalgia is pain anywhere in the region of the head or neck. It can be a symptom of a number of different conditions of the head and neck. The brain tissue itself is not sensitive to pain because it lacks pain receptors. Rather, the pain is caused by disturbance of the...
s.

The sawfishes are shark-like in form, having tails used for swimming and smaller pectoral fins than most batoids. The pectoral fins are attached above the gills as in all batoids, giving the fishes a broad-headed appearance. They have long, flat snouts with a row of tooth-like projections on either side. The snouts are up to 1.8 metres (6 ft) long, and 30 centimetres (1 ft) wide, and are used for slashing and impaling small fishes and to probe in the mud for imbedded animals. Sawfishes can enter freshwater rivers and lakes. Some species reach a total length of 6 metres (20 ft).