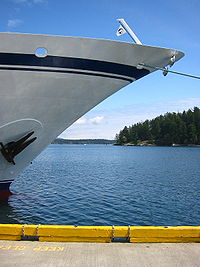 The bow is a nautical term that refers to the forward part of the hull
Hull (watercraft)
A hull is the watertight body of a ship or boat. Above the hull is the superstructure and/or deckhouse, where present. The line where the hull meets the water surface is called the waterline.The structure of the hull varies depending on the vessel type...
of a ship
Ship
Since the end of the age of sail a ship has been any large buoyant marine vessel. Ships are generally distinguished from boats based on size and cargo or passenger capacity. Ships are used on lakes, seas, and rivers for a variety of activities, such as the transport of people or goods, fishing,...
or boat
Boat
A boat is a watercraft of any size designed to float or plane, to provide passage across water. Usually this water will be inland or in protected coastal areas. However, boats such as the whaleboat were designed to be operated from a ship in an offshore environment. In naval terms, a boat is a...
, the point that is most forward when the vessel is underway. Both of the adjectives fore and forward mean towards the bow. The other end of the boat is called the stern
Stern
The stern is the rear or aft-most part of a ship or boat, technically defined as the area built up over the sternpost, extending upwards from the counter rail to the taffrail. The stern lies opposite of the bow, the foremost part of a ship. Originally, the term only referred to the aft port section...
. 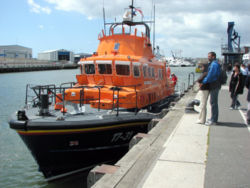 The bow is designed to reduce the resistance
Drag (physics)
In fluid dynamics, drag refers to forces which act on a solid object in the direction of the relative fluid flow velocity...
of the hull cutting through water and should be tall enough to prevent water from easily washing over the top of it. On slower ships like tankers, a fuller bow shape is used to maximise the volume of the ship for a given length.

A "wet bow" results from seawater washing over the top of the hull. A raked stem can help to reduce the wetness of the bow. Aside from making the deck slippery, water can corrode the metal of the ship. If the temperature is low enough this water can also freeze on the deck, rails, turrets, and other exposed surfaces, increasing the topside weight.

The forward part of the bow, usually on the ship's centreline, is called the stem. Traditionally, the stem was an upright timber or metal bar into which side planks or plates were joined.

Several types of bows exist. These include :