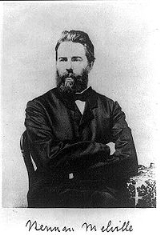 Overview
Herman Melville was an American novelist, short story
Short story
A short story is a work of fiction that is usually written in prose, often in narrative format. This format tends to be more pointed than longer works of fiction, such as novellas and novels. Short story definitions based on length differ somewhat, even among professional writers, in part because...
writer, essayist, and poet. He is best known for his novel Moby-Dick
Moby-Dick
Moby-Dick; or, The Whale, was written by American author Herman Melville and first published in 1851. It is considered by some to be a Great American Novel and a treasure of world literature. The story tells the adventures of wandering sailor Ishmael, and his voyage on the whaleship Pequod,...
and the posthumous novella Billy Budd
Billy Budd
Billy Budd is a short novel by Herman Melville.Billy Budd can also refer to:*Billy Budd , a 1962 film produced, directed, and co-written by Peter Ustinov, based on Melville's novel...
.
His first three books gained much contemporary attention (the first, Typee
Typee
Typee is American writer Herman Melville's first book, a classic in the literature of travel and adventure partly based on his actual experiences as a captive on the island Nuku Hiva in the South Pacific Marquesas Islands, in 1842...
, becoming a bestseller), and after a fast-blooming literary success in the late 1840s, his popularity declined precipitously in the mid-1850s and never recovered during his lifetime.

It seems to me that I vaguely recall Melville writing about firewalking--that is, about hearing of or seeing firewalking on one of the islands he or o...
More

What was Melville's influence on American literature?

Why did Herman Melville write "Gold in the Mountain"?

What are the themes of Moby Dick?

How was Melville's early life reflected in his work?
More

Timoleon, Fragments of a Lost Gnostic Poem of the Twelfth Century, Fragment 2

It was not a very white jacket, but white enough, in all conscience, as the sequel will show.The way I came by it was this...

Many sensible things banished from high life find an asylum among the mob.

Familiarity with danger makes a brave man braver, but less daring. Thus with seamen: he who goes the oftenest round Cape Horn goes the most circumspectly.

In time of peril, like the needle to the loadstone, obedience, irrespective of rank, generally flies to him who is best fitted to command.

We Americans are the peculiar, chosen people — the Israel of our time; we bear the ark of the liberties of the world.

A man of true science... uses but few hard words, and those only when none other will answer his purpose; whereas the smatterer in science... thinks, that by mouthing hard words, he proves that he understands hard things.