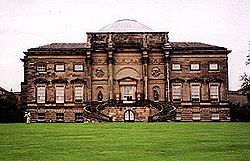 The piano nobile (Italian
Italian language
Italian is a Romance language spoken mainly in Europe: Italy, Switzerland, San Marino, Vatican City, by minorities in Malta, Monaco, Croatia, Slovenia, France, Libya, Eritrea, and Somalia, and by immigrant communities in the Americas and Australia...
, "noble floor" or "noble level") is the principal floor
Floor
A floor is the walking surface of a room or vehicle. Floors vary from simple dirt in a cave to many-layered surfaces using modern technology...
of a large house
House
A house is a building or structure that has the ability to be occupied for dwelling by human beings or other creatures. The term house includes many kinds of different dwellings ranging from rudimentary huts of nomadic tribes to free standing individual structures...
, usually built in one of the styles of classical renaissance architecture
Renaissance architecture
Renaissance architecture is the architecture of the period between the early 15th and early 17th centuries in different regions of Europe, demonstrating a conscious revival and development of certain elements of ancient Greek and Roman thought and material culture. Stylistically, Renaissance...
. This floor contains the principal reception and bedrooms of the house.

The piano nobile is often the first (European terminology, 2nd floor in US terms) or sometimes the second storey
Storey
A storey or story is any level part of a building that could be used by people...
, located above an (often rusticated
Rustication (architecture)
thumb|upright|Two different styles of rustication in the [[Palazzo Medici-Riccardi]] in [[Florence]].In classical architecture rustication is an architectural feature that contrasts in texture with the smoothly finished, squared block masonry surfaces called ashlar...
) ground floor containing minor rooms and service rooms. The reasons for this were so the rooms would have finer views, and more practically to avoid the dampness and odors of the street level. This is especially true in Venice
Venice
Venice is a city in northern Italy which is renowned for the beauty of its setting, its architecture and its artworks. It is the capital of the Veneto region...
where the piano nobile of the many palazzi
Palazzo
Palazzo, an Italian word meaning a large building , may refer to:-Buildings:*Palazzo, an Italian type of building**Palazzo style architecture, imitative of Italian palazzi...
is especially obvious from the exterior by virtue of its larger windows and balconies and open loggias. Examples of this are Ca' Foscari, Ca' d'Oro
Ca' d'Oro
Ca' d'Oro is a palace on the Grand Canal in Venice, northern Italy. One of the older palazzi, it has always been known as Ca' d'Oro due to the gilt and polychrome external decorations which once adorned its walls.The Palazzo was built between 1428 and 1430 for the Contarini family, who provided...
, Ca' Vendramin Calergi
Ca' Vendramin Calergi
Ca' Vendramin Calergi is a palace on the Grand Canal in the sestiere of Cannaregio in Venice, northern Italy. Other names by which it is known include: Palazzo Vendramin Calergi, Palazzo Loredan Vendramin Calergi, and Palazzo Loredan Griman Calergi Vendramin. The architecturally distinguished...
, and Palazzo Barbarigo
Palazzo Barbarigo
Palazzo Barbarigo is a palace in Venice, Italy, situated on the Grand Canal of the city. It was originally built in the 16th century. Today it is one of the more opulent palazzi on the canal, distinguished by its mosaics of Murano glass applied in 1886...
.

Larger windows than those on other floors are usually the most obvious feature of the piano nobile. Often in England
England
England is a country that is part of the United Kingdom. It shares land borders with Scotland to the north and Wales to the west; the Irish Sea is to the north west, the Celtic Sea to the south west, with the North Sea to the east and the English Channel to the south separating it from continental...
and Italy
Italy
Italy , officially the Italian Republic languages]] under the European Charter for Regional or Minority Languages. In each of these, Italy's official name is as follows:;;;;;;;;), is a unitary parliamentary republic in South-Central Europe. To the north it borders France, Switzerland, Austria and...
the piano nobile is reached by an ornate outer staircase, which negated the need for the inhabitants of this floor to enter the house by the servant's floor below. Kedleston Hall
Kedleston Hall
Kedleston Hall is an English country house in Kedleston, Derbyshire, approximately four miles north-west of Derby, and is the seat of the Curzon family whose name originates in Notre-Dame-de-Courson in Normandy...
is an example of this in England, as is Villa Capra in Italy.

Most houses contained a secondary floor above the piano nobile which contained more intimate withdrawing and bedrooms for private use by the family of the house when no honoured guests were present. Above this floor would often be an attic floor containing staff bedrooms.

Secondo piano nobile: In Italy, especially in Venetian, and the larger, palazzi, the floor above the piano nobile is sometimes referred to as the "secondo piano nobile" (second principal floor), especially if the loggia
Loggia
Loggia is the name given to an architectural feature, originally of Minoan design. They are often a gallery or corridor at ground level, sometimes higher, on the facade of a building and open to the air on one side, where it is supported by columns or pierced openings in the wall...
s and balconies reflect those below on a slightly smaller scale. In these instances, occasionally in museums etc, the principal piano nobile, is described as the "primo piano nobile" to differentiate it. These terms while often used are technically incorrect as the piano nobile always contains the grandest rooms, therefore the secondary floor by its very name cannot be as grand. This term is not used in Britain.

This arrangement of floors continued throughout Europe
Europe
Europe is, by convention, one of the world's seven continents. Comprising the westernmost peninsula of Eurasia, Europe is generally 'divided' from Asia to its east by the watershed divides of the Ural and Caucasus Mountains, the Ural River, the Caspian and Black Seas, and the waterways connecting...
for as long as large houses continued to be built in the classical styles. This arrangement was designed at Buckingham Palace
Buckingham Palace
Buckingham Palace, in London, is the principal residence and office of the British monarch. Located in the City of Westminster, the palace is a setting for state occasions and royal hospitality...
as recently as the mid 19th century. Holkham Hall
Holkham Hall
Holkham Hall is an eighteenth-century country house located adjacent to the village of Holkham, on the north coast of the English county of Norfolk...
, Osterley Park
Osterley Park
Osterley Park is a mansion set in a large park of the same name. It is in the London Borough of Hounslow, part of the western suburbs of London. When the house was built it was surrounded by rural countryside. It was one of a group of large houses close to London which served as country retreats...
and Chiswick House
Chiswick House
Chiswick House is a Palladian villa in Burlington Lane, Chiswick, in the London Borough of Hounslow in England. Set in , the house was completed in 1729 during the reign of George II and designed by Lord Burlington. William Kent , who took a leading role in designing the gardens, created one of the...
are 18th century English houses which employed this design.
The source of this article is wikipedia, the free encyclopedia.  The text of this article is licensed under the GFDL.