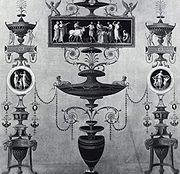 The original building on this site was a manor house
Manor house
A manor house is a country house that historically formed the administrative centre of a manor, the lowest unit of territorial organisation in the feudal system in Europe. The term is applied to country houses that belonged to the gentry and other grand stately homes...
built in the 1570s for banker Sir Thomas Gresham
Thomas Gresham
Sir Thomas Gresham was an English merchant and financier who worked for King Edward VI of England and for Edward's half-sisters, Queens Mary I and Elizabeth I.-Family and childhood:...
, who purchased the manor of Osterley in 1562.The "faire and stately brick house" was complete in 1576. It is known that Queen Elizabeth
Elizabeth I of England
Elizabeth I was queen regnant of England and Ireland from 17 November 1558 until her death. Sometimes called The Virgin Queen, Gloriana, or Good Queen Bess, Elizabeth was the fifth and last monarch of the Tudor dynasty...
visited. The stable block from this period remains at Osterley Park. Gresham was so wealthy he also bought the neighbouring Manor of Boston in 1572. His widowed stepdaughter-in-law built the present Jacobean manor house there which still stands to this day.

Two hundred years later the manor house was falling into disrepair, when, as the result of a mortgage default, it came into the ownership of Sir Francis Child, the head of Child's Bank
Child & Co
Child & Co. is a private banking house in the United Kingdom, part of the Royal Bank of Scotland Group. It is based at 1 Fleet Street in the City of London....
. In 1761 he employed Robert Adam
Robert Adam
Robert Adam was a Scottish neoclassical architect, interior designer and furniture designer. He was the son of William Adam , Scotland's foremost architect of the time, and trained under him...
, who was just emerging as one of the most fashionable architects in England, to remodel the house. When Sir Francis died in 1763, the project was taken up by his brother and heir Robert Child, for whom the interiors were created.

The house is of red brick with white stone details and is approximately square, with turrets in the four corners. Adam's design, which incorporates some of the earlier structure, is highly unusual, and differs greatly in style from the original construction. One side is left almost open and is spanned by an Ionic
Ionic order
The Ionic order forms one of the three orders or organizational systems of classical architecture, the other two canonic orders being the Doric and the Corinthian...
pedimented screen which is approached by a broad flight of steps and leads to a central courtyard, which is at piano nobile
Piano nobile
The piano nobile is the principal floor of a large house, usually built in one of the styles of classical renaissance architecture...
level.

Adam's neoclassical interiors are among his most notable sequences of rooms. Horace Walpole sarcastically described the drawing room as "worthy of Eve
Eve
Eve is the first woman created by God in the Book of Genesis.Eve may also refer to:-People:*Eve , a common given name and surname*Eve , American recording artist and actress-Places:...
before the fall." The rooms are characterised by elaborate but restrained plasterwork, rich, highly varied colour schemes, and a degree of coordination between decor and furnishings unusual in English neoclassical interiors. Notable rooms include the entrance hall, which has large semi-circular alcoves at each end, and the Etruscan dressing room, which Adam said was inspired by the Etruscan vases in Sir William Hamilton
William Hamilton (diplomat)
Sir William Hamilton KB, PC, FRS was a Scottish diplomat, antiquarian, archaeologist and vulcanologist. After a short period as a Member of Parliament, he served as British Ambassador to the Kingdom of Naples from 1764 to 1800...
's collection, illustrations of which had recently been published. Adam also designed some of the furniture, including the opulent domed state bed, still in the house.

The grounds of Osterley Park were used for the training of the first members of the Local Defence Volunteers (forerunners of the Home Guard) when the 9th Earl, a friend of publisher Lord Hulton, allowed writer and military journalist Captain Tom Wintringham
Tom Wintringham
Thomas Henry Wintringham was a British soldier, military historian, journalist, poet, Marxist, politician and author. He was an important figure in the formation of the Home Guard during World War II and was one of the founders of the Common Wealth Party.-Early life:Tom Wintringham was born 1898...
to establish the first Home Guard training school (which Hulton sponsored) at the park in May/June 1940, teaching the theory and practice of modern mechanical warfare, guerilla warfare techniques and using the estate workers' homes, then scheduled for demolition, to teach street fighting techniques. The painter Roland Penrose
Roland Penrose
Sir Roland Algernon Penrose CBE was an English artist, historian and poet. He was a major promoter and collector of modern art and an associate of the surrealists in the United Kingdom.- Biography :...
taught camouflage techniques here, attempting to disguise the obvious charms of a naked Lee Miller
Lee Miller
Elizabeth 'Lee' Miller, Lady Penrose was an American photographer. Born in Poughkeepsie, New York in 1907, she was a successful fashion model in New York City in the 1920s before going to Paris where she became an established fashion and fine art photographer...
. Maj. Wilfred Vernon taught the art of mixing home made explosives, and his explosives store can still be seen at the rear of the house, while Canadian Bert "Yank" Levy
Albert Levy (soldier)
Albert "Yank" Levy was a soldier, military instructor and author of a manual on guerrilla warfare. He served with irregular forces in several parts of the world in the 1920s and 30's and was a significant figure at the Osterley Park training school for the British Home Guard during World War...
, who had served under Wintringham in the Spanish Civil War
Spanish Civil War
The Spanish Civil WarAlso known as The Crusade among Nationalists, the Fourth Carlist War among Carlists, and The Rebellion or Uprising among Republicans. was a major conflict fought in Spain from 17 July 1936 to 1 April 1939...
taught knife fighting and hand to hand combat. Despite winning world fame in newsreels and newspaper articles around the world (particularly in the US), the school was disapproved of by the War Office
War Office
The War Office was a department of the British Government, responsible for the administration of the British Army between the 17th century and 1964, when its functions were transferred to the Ministry of Defence...
and Winston Churchill
Winston Churchill
Sir Winston Leonard Spencer-Churchill, was a predominantly Conservative British politician and statesman known for his leadership of the United Kingdom during the Second World War. He is widely regarded as one of the greatest wartime leaders of the century and served as Prime Minister twice...
, and was taken over in September 1940 and closed in 1941, the staff and courses reallocated to other newly opened WO approved Home Guard schools.