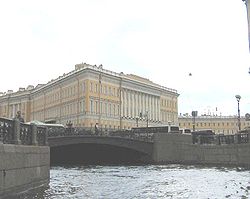 The Pevchesky Bridge also known as the Yellow Bridge, (Жёлтый Мост, Zholtyi Most), is a single-span bridge across the Moika River
Moika River
The Moyka River is a small river which encircles the central portion of Saint Petersburg, effectively making it an island. The river, originally known as Mya, derives its name from the Ingrian word for "slush, mire"...
in Saint Petersburg
Saint Petersburg
Saint Petersburg is a city and a federal subject of Russia located on the Neva River at the head of the Gulf of Finland on the Baltic Sea...
, Russia
Russia
Russia or , officially known as both Russia and the Russian Federation , is a country in northern Eurasia. It is a federal semi-presidential republic, comprising 83 federal subjects...
. The bridge is a part of the Palace Square
Palace Square
Palace Square , connecting Nevsky Prospekt with Palace Bridge leading to Vasilievsky Island, is the central city square of St Petersburg and of the former Russian Empire...
. The length of the bridge is 21 metres, and the width is 72 metres. It is the third-widest bridge in Saint Petersburg, after the Blue Bridge
Blue Bridge (Saint Petersburg)
The Blue Bridge , is a 97.3 metre wide bridge that spans the Moika River in Saint Petersburg, Russia. The Blue Bridge is the widest bridge in Saint Petersburg and is sometimes claimed to be the widest bridge in the world — a claim, however, that has not been recognized by international reference...
and Kazansky Bridge
Kazansky Bridge
Kazansky Bridge is a bridge across Griboyedov Canal in Saint Petersburg, Russia. From 1766 to 1830 it had a name Rozhdestvensky Bridge and from 1923 to 1944—Plekhanov Bridge . It is located near the Kazan Cathedral . The bridge's length is 18.8 meters, and the width is 95.5 meters...
.

The first wooden bridge on the site was designed by the French architect Auguste de Montferrand
Auguste de Montferrand
Auguste de Montferrand was a French Neoclassical architect who worked primarily in Russia. His two best known works are the Saint Isaac's Cathedral and the Alexander Column in St. Petersburg.-Family:...
; it was inaugurated in 1834. The first pedestrians to cross the bridge were the troops marching to the parade celebrating the unveiling of the Alexander Column
Alexander Column
The Alexander Column also known as Alexandrian Column , is the focal point of Palace Square in Saint Petersburg, Russia. The monument was erected after the Russian victory in the war with Napoleon's France...
(also designed by Montferrand). The bridge got the name Yellow from the color of the railings, and according to the tradition of color-coding the bridges crossing the Moika River (that already had the Blue Bridge, the Green Bridge
Green Bridge (Saint Petersburg)
Green Bridge is a bridge across Moika River in Saint Petersburg, Russia. It was the first cast iron bridge in the city....
and the Red Bridge
Red Bridge
The Red Bridge , is a single-span bridge across the Moika River in Saint Petersburg, Russia. The bridge is a part of Gorokhovaya Street. The length of the bridge is 42 m; the width is 16.8 m....
). 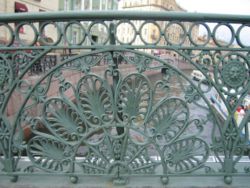 In 1837, Georg von Cancrin
Georg von Cancrin
Count Yegor Frantsevich Kankrin was born Ludwig Daniel von Cancrin in Hanau. He accompanied his father, the mineralogist Franz Ludwig von Cancrin, to Russia in 1797, joining the imperial service and changing his name to Georg. In 1823, he was appointed Minister of Finance and held the office for...
, an imperial minister
Russian Empire
The Russian Empire was a state that existed from 1721 until the Russian Revolution of 1917. It was the successor to the Tsardom of Russia and the predecessor of the Soviet Union...
of finance, proposed to replace the wooden bridge with a much wider cast iron
Cast iron
Cast iron is derived from pig iron, and while it usually refers to gray iron, it also identifies a large group of ferrous alloys which solidify with a eutectic. The color of a fractured surface can be used to identify an alloy. White cast iron is named after its white surface when fractured, due...
structure. According to legend, Emperor Nicholas I
Nicholas I of Russia
Nicholas I , was the Emperor of Russia from 1825 until 1855, known as one of the most reactionary of the Russian monarchs. On the eve of his death, the Russian Empire reached its historical zenith spanning over 20 million square kilometers...
himself chose the location for the bridge. Across the river from the Winter Palace
Winter Palace
The Winter Palace in Saint Petersburg, Russia, was, from 1732 to 1917, the official residence of the Russian monarchs. Situated between the Palace Embankment and the Palace Square, adjacent to the site of Peter the Great's original Winter Palace, the present and fourth Winter Palace was built and...
was located the house of Count Yury Alexandrovich Golovkin. Once, Golovkin was in such a hurry to meet the Emperor, that he stepped from the boat transporting him across the Moyka and nearly drowned. Thus, Nicholas stated to Golvkin that he specifically located the bridge close to Golovkin's house, so as not to repeat the accident.

The new bridge was designed by architects Vasily Stasov
Vasily Stasov
Vasily Petrovich Stasov was a Russian architect.-Biography:Stasov was born in Moscow....
, Domenico Adamini, and engineer E.A. Adam. The bridge was opened on 24 October 1840. The first user of the bridge was Nicholas I himself, who solemnly crossed the new bridge in his horse-drawn coach. The main decoration of the bridge are beautiful cast iron railings, with numerous frills, the main repeating elements being fan-like palmettos.