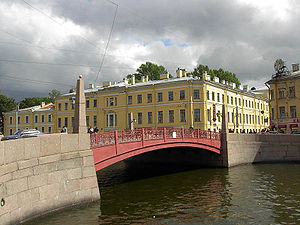 The Red Bridge is a single-span bridge across the Moika River
Moika River
The Moyka River is a small river which encircles the central portion of Saint Petersburg, effectively making it an island. The river, originally known as Mya, derives its name from the Ingrian word for "slush, mire"...
in Saint Petersburg
Saint Petersburg
Saint Petersburg is a city and a federal subject of Russia located on the Neva River at the head of the Gulf of Finland on the Baltic Sea...
, Russia
Russia
Russia or , officially known as both Russia and the Russian Federation , is a country in northern Eurasia. It is a federal semi-presidential republic, comprising 83 federal subjects...
. The bridge is a part of Gorokhovaya Street
Gorokhovaya Street
Gorokhovaya Street is a north-south thoroughfare in the Central Business District of Saint Petersburg.Gorokhovaya Street extends from the Admiralty and runs south, crossing the Moyka River and the Griboyedov Canal, crossing the Garden Street near Sennaya Square. Running south, crossing Fontanka...
. The length of the bridge is 42 m; the width is 16.8 m.

The first cast iron
Cast iron
Cast iron is derived from pig iron, and while it usually refers to gray iron, it also identifies a large group of ferrous alloys which solidify with a eutectic. The color of a fractured surface can be used to identify an alloy. White cast iron is named after its white surface when fractured, due...
bridge on the site was designed and built in 1808-1813 to a design by William Heste
William Heste
William Hastie was a Russian architect, civil engineer and town planner of Scottish descent. His name is also transliterated back from Russian as William Heste or, seldom, Vasily Heste....
. The bridge was rebuilt in 1953 by architect V.V. Blazhevich. The original cast iron structure of the bridge was replaced by the welded steel arches but most of the decorations are left intact.