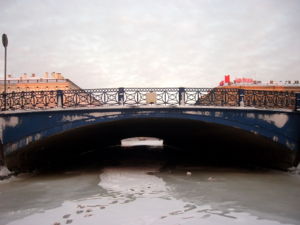 The Blue Bridge is a 97.3 metre wide bridge that spans the Moika River
Moika River
The Moyka River is a small river which encircles the central portion of Saint Petersburg, effectively making it an island. The river, originally known as Mya, derives its name from the Ingrian word for "slush, mire"...
in Saint Petersburg
Saint Petersburg
Saint Petersburg is a city and a federal subject of Russia located on the Neva River at the head of the Gulf of Finland on the Baltic Sea...
, Russia
Russia
Russia or , officially known as both Russia and the Russian Federation , is a country in northern Eurasia. It is a federal semi-presidential republic, comprising 83 federal subjects...
. The Blue Bridge is the widest bridge in Saint Petersburg and is sometimes claimed to be the widest bridge in the world — a claim, however, that has not been recognized by international reference work
Reference work
A reference work is a compendium of information, usually of a specific type, compiled in a book for ease of reference. That is, the information is intended to be quickly found when needed. Reference works are usually referred to for particular pieces of information, rather than read beginning to end...
s, such as the Guinness World Records
Guinness World Records
Guinness World Records, known until 2000 as The Guinness Book of Records , is a reference book published annually, containing a collection of world records, both human achievements and the extremes of the natural world...
.

The Blue Bridge spans the Moika River and is located in front of the Mariinsky Palace
Mariinsky Palace
Mariinsky Palace, also known as Marie Palace , was the last Neoclassical imperial palace to be constructed in Saint Petersburg, Russia. It was built between 1839 and 1844 to a design by the court architect Andrei Stackensneider....
at Saint Isaac's Square in city's historic centre. The first cast iron
Cast iron
Cast iron is derived from pig iron, and while it usually refers to gray iron, it also identifies a large group of ferrous alloys which solidify with a eutectic. The color of a fractured surface can be used to identify an alloy. White cast iron is named after its white surface when fractured, due...
bridge on the site was designed in 1805 by the architect William Heste
William Heste
William Hastie was a Russian architect, civil engineer and town planner of Scottish descent. His name is also transliterated back from Russian as William Heste or, seldom, Vasily Heste....
, and built in 1818. This bridge was a single-span bridge resting on stone supports, and measured 41 metres across. In 1842-1844, the bridge was widened on its northern side to its present width of 97.3 metres - just as wide as the adjacent Isaac's Square. Soon after the bridge was widened, there were rumors that the new width of the bridge was 99.9 metres instead of the actual 97.3. This rumor even made it into some official booklets and textbooks. Today, most of the Blue Bridge serves as a parking lot.