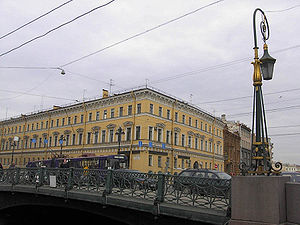 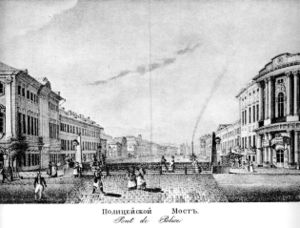 Green Bridge (also known as Police Bridge and People Bridge) is a bridge across Moika River
Moika River
The Moyka River is a small river which encircles the central portion of Saint Petersburg, effectively making it an island. The river, originally known as Mya, derives its name from the Ingrian word for "slush, mire"...
in Saint Petersburg
Saint Petersburg
Saint Petersburg is a city and a federal subject of Russia located on the Neva River at the head of the Gulf of Finland on the Baltic Sea...
, Russia
Russia
Russia or , officially known as both Russia and the Russian Federation , is a country in northern Eurasia. It is a federal semi-presidential republic, comprising 83 federal subjects...
. It was the first cast iron
Cast iron
Cast iron is derived from pig iron, and while it usually refers to gray iron, it also identifies a large group of ferrous alloys which solidify with a eutectic. The color of a fractured surface can be used to identify an alloy. White cast iron is named after its white surface when fractured, due...
bridge in the city.

In 1713, there was a major road built on the left bank of Neva river, which became the modern Nevsky Prospekt
Nevsky Prospekt
Nevsky Avenue |Prospekt]]) is the main street in the city of St. Petersburg, Russia. Planned by Peter the Great as beginning of the road to Novgorod and Moscow, the avenue runs from the Admiralty to the Moscow Railway Station and, after making a turn at Vosstaniya Square, to the Alexander...
. At the crossing with Moika, in 1716 the original wooden bridge was built. In 1730 it was painted green, therefore it got the name of Green Bridge. In 1768 the bridge was renamed Police Bridge due to the nearby house
Chicherin House
Chichrerin House was a historical landmark building located at Nevsky Prospekt 15 in Saint Petersburg, Russia...
of St. Petersburg's police general.

In 1806 in place of the existing bridge, the architect William Heste
William Heste
William Hastie was a Russian architect, civil engineer and town planner of Scottish descent. His name is also transliterated back from Russian as William Heste or, seldom, Vasily Heste....
built a new cast iron bridge. The strength of cast iron allowed a more elegant and lightweight design, especially compared with heavyweight granite bridges. The design was considered so successful, that it was approved as a standard design for bridges across the Moika.

In 1842, the Police Bridge was widened to accommodate growing traffic on Nevsky Prospekt. In 1844 it was the first bridge paved with asphalt
Asphalt
Asphalt or , also known as bitumen, is a sticky, black and highly viscous liquid or semi-solid that is present in most crude petroleums and in some natural deposits, it is a substance classed as a pitch...
in Russia. In 1904-1907, when the tram
Tram
A tram is a passenger rail vehicle which runs on tracks along public urban streets and also sometimes on separate rights of way. It may also run between cities and/or towns , and/or partially grade separated even in the cities...
way tracks were built into the Nevsky Prospekt, the bridge was widened again, and architect Lev Ilyin
Lev Ilyin
Lev Aleksandrovich Ilyin ) was a Russian architect.Between 1925-1938 Lev Ilyin was the main architect of Leningrad , and an author of the overall map of Leningrad and material in the sphere of town-planning....
added street lamps.

In 1918 the bridge was renamed to People Bridge , and in 1998 it was renamed once again back to its original designation, Green Bridge.