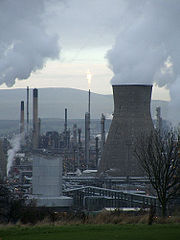 Petroleum products are useful materials derived from crude oil (petroleum
Petroleum
Petroleum or crude oil is a naturally occurring, flammable liquid consisting of a complex mixture of hydrocarbons of various molecular weights and other liquid organic compounds, that are found in geologic formations beneath the Earth's surface. Petroleum is recovered mostly through oil drilling...
) as it is processed in oil refineries.

According to crude oil composition and demand, refineries can produce different shares of petroleum products. The largest share of oil products is used as energy
Energy
In physics, energy is an indirectly observed quantity. It is often understood as the ability a physical system has to do work on other physical systems...
carriers: various grades of fuel oil
Fuel oil
Fuel oil is a fraction obtained from petroleum distillation, either as a distillate or a residue. Broadly speaking, fuel oil is any liquid petroleum product that is burned in a furnace or boiler for the generation of heat or used in an engine for the generation of power, except oils having a flash...
and gasoline
Gasoline
Gasoline , or petrol , is a toxic, translucent, petroleum-derived liquid that is primarily used as a fuel in internal combustion engines. It consists mostly of organic compounds obtained by the fractional distillation of petroleum, enhanced with a variety of additives. Some gasolines also contain...
. These energy-carrying fuel
Fuel
Fuel is any material that stores energy that can later be extracted to perform mechanical work in a controlled manner. Most fuels used by humans undergo combustion, a redox reaction in which a combustible substance releases energy after it ignites and reacts with the oxygen in the air...
s include or can be blended to give gasoline, jet fuel
Jet fuel
Jet fuel is a type of aviation fuel designed for use in aircraft powered by gas-turbine engines. It is clear to straw-colored in appearance. The most commonly used fuels for commercial aviation are Jet A and Jet A-1 which are produced to a standardized international specification...
, diesel fuel, heating oil
Heating oil
Heating oil, or oil heat, is a low viscosity, flammable liquid petroleum product used as a fuel for furnaces or boilers in buildings. Home heating oil is often abbreviated as HHO...
, and heavier fuel oils. Heavier (less volatile
Volatility (chemistry)
In chemistry and physics, volatility is the tendency of a substance to vaporize. Volatility is directly related to a substance's vapor pressure. At a given temperature, a substance with higher vapor pressure vaporizes more readily than a substance with a lower vapor pressure.The term is primarily...
) fractions can also be used to produce asphalt
Asphalt
Asphalt or , also known as bitumen, is a sticky, black and highly viscous liquid or semi-solid that is present in most crude petroleums and in some natural deposits, it is a substance classed as a pitch...
, tar
Tar
Tar is modified pitch produced primarily from the wood and roots of pine by destructive distillation under pyrolysis. Production and trade in tar was a major contributor in the economies of Northern Europe and Colonial America. Its main use was in preserving wooden vessels against rot. The largest...
, paraffin wax, lubricating
Lubricant
A lubricant is a substance introduced to reduce friction between moving surfaces. It may also have the function of transporting foreign particles and of distributing heat...
and other heavy oils. Refineries also produce other chemicals, some of which are used in chemical process
Chemical process
In a "scientific" sense, a chemical process is a method or means of somehow changing one or more chemicals or chemical compounds. Such a chemical process can occur by itself or be caused by somebody. Such a chemical process commonly involves a chemical reaction of some sort...
es to produce plastics and other useful materials. Since petroleum often contains a couple of percent sulfur
Sulfur
Sulfur or sulphur is the chemical element with atomic number 16. In the periodic table it is represented by the symbol S. It is an abundant, multivalent non-metal. Under normal conditions, sulfur atoms form cyclic octatomic molecules with chemical formula S8. Elemental sulfur is a bright yellow...
, sulfur is also often produced as a petroleum product. Hydrogen
Hydrogen
Hydrogen is the chemical element with atomic number 1. It is represented by the symbol H. With an average atomic weight of , hydrogen is the lightest and most abundant chemical element, constituting roughly 75% of the Universe's chemical elemental mass. Stars in the main sequence are mainly...
and carbon
Carbon
Carbon is the chemical element with symbol C and atomic number 6. As a member of group 14 on the periodic table, it is nonmetallic and tetravalent—making four electrons available to form covalent chemical bonds...
in the form of petroleum coke
Petroleum coke
Petroleum coke is a carbonaceous solid derived from oil refinery coker units or other cracking processes. Other coke has traditionally been derived from coal....
may also be produced as petroleum products. The hydrogen produced is often used as an intermediate product for other oil refinery processes such as hydrogen catalytic cracking (hydrocracking) and hydrodesulfurization
Hydrodesulfurization
Hydrodesulfurization is a catalytic chemical process widely used to remove sulfur from natural gas and from refined petroleum products such as gasoline or petrol, jet fuel, kerosene, diesel fuel, and fuel oils...
.

Petrochemicals have a vast variety of uses. They are commonly used as monomer
Monomer
A monomer is an atom or a small molecule that may bind chemically to other monomers to form a polymer; the term "monomeric protein" may also be used to describe one of the proteins making up a multiprotein complex...
s or feedstocks for monomer production. Olefins such as alpha-olefin
Alpha-olefin
Alpha-olefins are a family of organic compounds which are olefins or alkenes with a chemical formula CxH2x, distinguished by having a double bond at the primary or alpha position...
s and diene
Diene
In organic chemistry a diene or diolefin is a hydrocarbon that contains two carbon double bonds.Conjugated dienes are functional groups, with a general formula of CnH2n-2. Dienes and alkynes are functional isomers...
s are often used as monomers, although aromatics can also be used as monomer precursors. The monomers are then polymerized
Polymerization
In polymer chemistry, polymerization is a process of reacting monomer molecules together in a chemical reaction to form three-dimensional networks or polymer chains...
in various ways to form polymer
Polymer
A polymer is a large molecule composed of repeating structural units. These subunits are typically connected by covalent chemical bonds...
s. Polymer materials can be used as plastic
Plastic
A plastic material is any of a wide range of synthetic or semi-synthetic organic solids used in the manufacture of industrial products. Plastics are typically polymers of high molecular mass, and may contain other substances to improve performance and/or reduce production costs...
s, elastomer
Elastomer
An elastomer is a polymer with the property of viscoelasticity , generally having notably low Young's modulus and high yield strain compared with other materials. The term, which is derived from elastic polymer, is often used interchangeably with the term rubber, although the latter is preferred...
s, or fiber
Fiber
Fiber is a class of materials that are continuous filaments or are in discrete elongated pieces, similar to lengths of thread.They are very important in the biology of both plants and animals, for holding tissues together....
s, or possibly some intermediate form of these material types. Some polymers are also used as gels or lubricants. Petrochemicals can also be used as solvent
Solvent
A solvent is a liquid, solid, or gas that dissolves another solid, liquid, or gaseous solute, resulting in a solution that is soluble in a certain volume of solvent at a specified temperature...
s or as feedstock for producing solvents. Petrochemicals can also be used as precursors for a wide variety of chemicals and substances such as vehicle fluids, surfactant
Surfactant
Surfactants are compounds that lower the surface tension of a liquid, the interfacial tension between two liquids, or that between a liquid and a solid...
s for cleaners, etc.