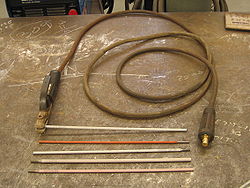 An electrode is an electrical conductor
Electrical conductor
In physics and electrical engineering, a conductor is a material which contains movable electric charges. In metallic conductors such as copper or aluminum, the movable charged particles are electrons...
used to make contact with a nonmetallic part of a circuit
Electronic circuit
An electronic circuit is composed of individual electronic components, such as resistors, transistors, capacitors, inductors and diodes, connected by conductive wires or traces through which electric current can flow...
(e.g. a semiconductor
Semiconductor
A semiconductor is a material with electrical conductivity due to electron flow intermediate in magnitude between that of a conductor and an insulator. This means a conductivity roughly in the range of 103 to 10−8 siemens per centimeter...
, an electrolyte
Electrolyte
In chemistry, an electrolyte is any substance containing free ions that make the substance electrically conductive. The most typical electrolyte is an ionic solution, but molten electrolytes and solid electrolytes are also possible....
or a vacuum
Vacuum
In everyday usage, vacuum is a volume of space that is essentially empty of matter, such that its gaseous pressure is much less than atmospheric pressure. The word comes from the Latin term for "empty". A perfect vacuum would be one with no particles in it at all, which is impossible to achieve in...
). The word was coined by the scientist Michael Faraday
Michael Faraday
Michael Faraday, FRS was an English chemist and physicist who contributed to the fields of electromagnetism and electrochemistry....
from the Greek
Greek language
Greek is an independent branch of the Indo-European family of languages. Native to the southern Balkans, it has the longest documented history of any Indo-European language, spanning 34 centuries of written records. Its writing system has been the Greek alphabet for the majority of its history;...
words elektron (meaning amber
Amber
Amber is fossilized tree resin , which has been appreciated for its color and natural beauty since Neolithic times. Amber is used as an ingredient in perfumes, as a healing agent in folk medicine, and as jewelry. There are five classes of amber, defined on the basis of their chemical constituents...
, from which the word electricity
Electricity
Electricity is a general term encompassing a variety of phenomena resulting from the presence and flow of electric charge. These include many easily recognizable phenomena, such as lightning, static electricity, and the flow of electrical current in an electrical wire...
is derived) and hodos, a way.

Anode and cathode in electrochemical cells

A primary cell
Primary cell
A primary cell is any kind of battery in which the electrochemical reaction is not reversible, rendering the cell non-rechargeable. A common example of a primary cell is the disposable battery. Unlike a secondary cell, the reaction cannot be reversed by running a current into the cell; the chemical...
is a special type of electrochemical cell in which the reaction cannot be reversed, and the identities of the anode and cathode are therefore fixed. The anode is always the negative electrode. The cell can be discharged but not recharged. Unlike secondary cells, primary cells are used instantaneously.

A secondary cell, for example a rechargeable battery
Rechargeable battery
A rechargeable battery or storage battery is a group of one or more electrochemical cells. They are known as secondary cells because their electrochemical reactions are electrically reversible. Rechargeable batteries come in many different shapes and sizes, ranging anything from a button cell to...
, is one in which the chemical reactions are reversible. When the cell is being charged, the anode becomes the positive (+) and the cathode the negative (−) electrode. This is also the case in an electrolytic cell
Electrolytic cell
An electrolytic cell decomposes chemical compounds by means of electrical energy, in a process called electrolysis; the Greek word lysis means to break up. The result is that the chemical energy is increased...
. When the cell is being discharged, it behaves like a primary cell, with the anode as the negative and the cathode as the positive electrode.


Other anodes and cathodes

In a vacuum tube
Vacuum tube
In electronics, a vacuum tube, electron tube , or thermionic valve , reduced to simply "tube" or "valve" in everyday parlance, is a device that relies on the flow of electric current through a vacuum...
or a semiconductor
Semiconductor
A semiconductor is a material with electrical conductivity due to electron flow intermediate in magnitude between that of a conductor and an insulator. This means a conductivity roughly in the range of 103 to 10−8 siemens per centimeter...
having polarity (diode
Diode
In electronics, a diode is a type of two-terminal electronic component with a nonlinear current–voltage characteristic. A semiconductor diode, the most common type today, is a crystalline piece of semiconductor material connected to two electrical terminals...
s, electrolytic capacitors) the anode is the positive (+) electrode and the cathode the negative (−). The electrons enter the device through the cathode and exit the device through the anode. Many devices have other electrodes to control operation, e.g., base, gate, control grid.

In a three-electrode cell, a counter electrode, also called an auxiliary electrode
Auxiliary electrode
The Auxiliary electrode, often also called the counter electrode, is an electrode used in a three electrode electrochemical cell for voltammetric analysis or other reactions in which an electrical current is expected to flow...
, is used only to make a connection to the electrolyte so that a current can be applied to the working electrode. The counter electrode is usually made of an inert material, such as a noble metal
Noble metal
Noble metals are metals that are resistant to corrosion and oxidation in moist air, unlike most base metals. They tend to be precious, often due to their rarity in the Earth's crust...
or graphite
Graphite
The mineral graphite is one of the allotropes of carbon. It was named by Abraham Gottlob Werner in 1789 from the Ancient Greek γράφω , "to draw/write", for its use in pencils, where it is commonly called lead . Unlike diamond , graphite is an electrical conductor, a semimetal...
, to keep it from dissolving.

Electric currents are run through nonmetal objects to alter them in numerous ways and to measure conductivity for numerous purposes. Examples include: