Encyclopedia
Freezing
Freezing
Freezing or solidification is a phase change in which a liquid turns into a solid when its temperature is lowered below its freezing point. The reverse process is melting....
food preserves it from the time it is prepared to the time it is eaten. Since early times, farmers, fishermen, and trappers have preserved their game and produce in unheated buildings during the winter season. Freezing food slows down decomposition by turning water to ice, making it unavailable for most bacterial growth. In the food commodity industry, the process is called IQF or Individually Quick Frozen. 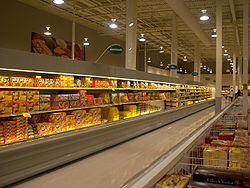 Frozen product don’t require many preservatives because the process of preparing the food for freezing kills most of the bacteria living on the food. Carboxymethylcellulose (CMC) is used as a stabilizer in frozen foods because of its tasteless and odorless properties.

Beginning in 1929, Clarence Birdseye
Clarence Birdseye
Clarence Frank Birdseye II was an American inventor who is considered the founder of the modern method of freezing food.- Early work :...
offered his quick-frozen foods to the public. Birdseye got the idea during fur-trapping expeditions to Labrador
Labrador
Labrador is the distinct, northerly region of the Canadian province of Newfoundland and Labrador. It comprises the mainland portion of the province, separated from the island of Newfoundland by the Strait of Belle Isle...
in 1912 and 1916, where he saw the natives use freezing to preserve foods. Modern attempts at refrigeration began in the early 20th century in the meat packing industry. More advanced attempts include food frozen for Eleanor Roosevelt
Eleanor Roosevelt
Anna Eleanor Roosevelt was the First Lady of the United States from 1933 to 1945. She supported the New Deal policies of her husband, distant cousin Franklin Delano Roosevelt, and became an advocate for civil rights. After her husband's death in 1945, Roosevelt continued to be an international...
on her trip to Russia. Other experiments, involving orange juice, ice cream and vegetables were conducted by the military near the end of World War II.

Frozen food packaging must maintain its integrity throughout machine filling, sealing, freezing, storage, transportation, thawing, and often cooking. As many frozen foods are cooked in a microwave oven, manufacturers have developed packaging that can go straight from freezer to the microwave.

In 1974, the first differential heating container (DHC) was sold to the public. A DHC is a sleeve of metal designed to allow frozen foods to receive the correct amount of heat. Various sized apertures were positioned around the sleeve. The consumer would put the frozen dinner into the sleeve according to what needed the most heat. This ensured proper cooking.


With these new technologies, food may last longer and our knowledge about its safety will increase.

According to a study, an average American consumes 71 frozen foods a year. The largest category of these frozen foods is frozen dinners, which many consumers purchase for a convenient and quick meal. Many food critic
Food critic
The terms food critic, food writer, and restaurant critic can all be used to describe a writer who analyzes food or restaurants and then publishes the results of their findings. While these terms are not strictly synonymous they are often used interchangeably, at least in some circumstances...
s have devoted a show to the tasting and reviewing of frozen food, such as the web show Freezerburns
Freezerburns
Freezerburns is a frozen food review web show hosted by Gregory Ng. Calling himself the "Frozen Food Master," Ng eats and reviews various brands of frozen food, and assigns it a rating based on his opinion...
.
The source of this article is wikipedia, the free encyclopedia.  The text of this article is licensed under the GFDL.