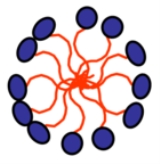 Overview
Surfactants are compounds that lower the surface tension
Surface tension
Surface tension is a property of the surface of a liquid that allows it to resist an external force. It is revealed, for example, in floating of some objects on the surface of water, even though they are denser than water, and in the ability of some insects to run on the water surface...
of a liquid, the interfacial tension between two liquids, or that between a liquid and a solid. Surfactants may act as detergents, wetting agents, emulsifiers, foaming agent
Foaming agent
A foaming agent is a surfactant, which when present in small amounts, facilitates the formation of a foam, or enhances its colloidal stability by inhibiting the coalescence of bubbles....
s, and dispersant
Dispersant
A dispersant or a dispersing agent or a plasticizer or a superplasticizer is either a non-surface active polymer or a surface-active substance added to a suspension, usually a colloid, to improve the separation of particles and to prevent settling or clumping...
s.

The term surfactant is a blend of surface active agents.

What is the MCL of cationic surfactants in drinking water