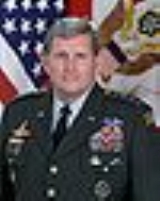 Schoomaker was born on February 12, 1946 in Michigan. He was raised in an army family. After attending East Lansing High School
East Lansing High School
East Lansing High School is a public high school in the city of East Lansing, Michigan, United States. It is managed by the East Lansing Public Schools district....
, Schoomaker graduated from the University of Wyoming
University of Wyoming
The University of Wyoming is a land-grant university located in Laramie, Wyoming, situated on Wyoming's high Laramie Plains, at an elevation of 7,200 feet , between the Laramie and Snowy Range mountains. It is known as UW to people close to the university...
in 1969 with a Bachelor of Science
Bachelor of Science
A Bachelor of Science is an undergraduate academic degree awarded for completed courses that generally last three to five years .-Australia:In Australia, the BSc is a 3 year degree, offered from 1st year on...
degree in education administration
Education
Education in its broadest, general sense is the means through which the aims and habits of a group of people lives on from one generation to the next. Generally, it occurs through any experience that has a formative effect on the way one thinks, feels, or acts...
. A football player, he was a starter on Wyoming's Sugar Bowl team. He holds a Master of Arts
Master of Arts (postgraduate)
A Master of Arts from the Latin Magister Artium, is a type of Master's degree awarded by universities in many countries. The M.A. is usually contrasted with the M.S. or M.Sc. degrees...
degree in management
Management
Management in all business and organizational activities is the act of getting people together to accomplish desired goals and objectives using available resources efficiently and effectively...
from Central Michigan University
Central Michigan University
Central Michigan University is a public research university located in Mount Pleasant in the U.S. state of Michigan...
, and an Honorary Doctorate of Laws from Hampden-Sydney College
Hampden-Sydney College
Hampden–Sydney College is a liberal arts college for men located in Hampden Sydney, Virginia, United States. Founded in 1775, Hampden–Sydney is the oldest private charter college in the Southern U.S., the last college founded before the American Revolution, and one of only three four-year,...
.

Schoomaker participated in numerous deployment operations including Eagle Claw
Operation Eagle Claw
Operation Eagle Claw was an American military operation ordered by President Jimmy Carter to attempt to put an end to the Iran hostage crisis by rescuing 52 Americans held captive at the U.S. Embassy in Tehran, Iran on 24 April 1980...
in Iran
Iran
Iran , officially the Islamic Republic of Iran , is a country in Southern and Western Asia. The name "Iran" has been in use natively since the Sassanian era and came into use internationally in 1935, before which the country was known to the Western world as Persia...
, Urgent Fury in Grenada
Grenada
Grenada is an island country and Commonwealth Realm consisting of the island of Grenada and six smaller islands at the southern end of the Grenadines in the southeastern Caribbean Sea...
, Operation Just Cause in Panama
Panama
Panama , officially the Republic of Panama , is the southernmost country of Central America. Situated on the isthmus connecting North and South America, it is bordered by Costa Rica to the northwest, Colombia to the southeast, the Caribbean Sea to the north and the Pacific Ocean to the south. The...
, Operation Desert Shield/Desert Storm in Southwest Asia, Uphold Democracy in Haiti
Haiti
Haiti , officially the Republic of Haiti , is a Caribbean country. It occupies the western, smaller portion of the island of Hispaniola, in the Greater Antillean archipelago, which it shares with the Dominican Republic. Ayiti was the indigenous Taíno or Amerindian name for the island...
, and supported various other operations.

After his retirement from active duty, Schoomaker served as a Director for DynCorp, as well as on the advisory boards of Camber Corporation
Camber Corporation
Camber Corporation is a defense contractor headquartered in Huntsville, Alabama. In 2006, it recorded $110 million dollars in revenue and ranked among the top 100 federal prime contractors. In 2008, Camber grew to over $240 million in revenue. In 2009, Camber is targeted to grow to over $400...
and EWA-Government Systems Inc. Concurrently, Schoomaker was the Director of CAE USA Inc. (from November 2007 to February 2009), where he still serves a member of the Human Resources Committee as well as an independent director and consultant on defense matters. Schoomaker is also currently a Director of Aeroflex Incorporated
Aeroflex
Aeroflex Inc. is an American company which produces and markets RF and microwave integrated circuits, components, and systems used for wireless communications. Aeroflex consists of Aeroflex Microelectronic Solutions , a fabless manufacturer of rad-hard and hi-rel semiconductor devices and...
and several private and non-profit companies, including the Special Operations Warrior Foundation
Special Operations Warrior Foundation
The Special Operations Warrior Foundation is an American tax-exempt 501 nonprofit organization founded in 1980 to provide college scholarships and educational counseling to the surviving children of Special Operations personnel killed in training accidents or operational missions...
.

Legion of Merit
Legion of Merit
The Legion of Merit is a military decoration of the United States armed forces that is awarded for exceptionally meritorious conduct in the performance of outstanding services and achievements...
(with 2 Oak Leaf Clusters)

An assessment of Army preparedness in terms of manpower, equipment, and funding. Delivered before the House Committee on the Armed Services.
The source of this article is wikipedia, the free encyclopedia.  The text of this article is licensed under the GFDL.