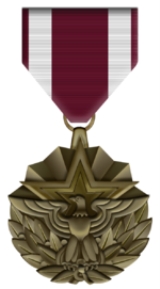 At the Tri-Department Awards Conference (February 5, 1968), there was a discussion on the need for a third meritorious award to provide appropriate recognition for non-combat achievement or service comparable to the Bronze Star
Bronze Star Medal
The Bronze Star Medal is a United States Armed Forces individual military decoration that may be awarded for bravery, acts of merit, or meritorious service. As a medal it is awarded for merit, and with the "V" for valor device it is awarded for heroism. It is the fourth-highest combat award of the...
for combat achievement or service. It was felt that the Legion of Merit
Legion of Merit
The Legion of Merit is a military decoration of the United States armed forces that is awarded for exceptionally meritorious conduct in the performance of outstanding services and achievements...
's prestige was slipping because it was being used with increasing frequency to reward service below the Legion of Merit's intended standard, but higher than that required for the Commendation Medal
Commendation Medal
The Commendation Medal is a mid-level United States military decoration which is presented for sustained acts of heroism or meritorious service. For valorous actions in direct contact with an enemy force, but of a lesser degree than required for the award of the Bronze Star, the Valor device may...
.

The decoration was designed by Mr. Jay Morris of the Institute of Heraldry, and the design was approved by the committee on March 20, 1969. The ribbon design purposely follows the colors used for the Legion of Merit
Legion of Merit
The Legion of Merit is a military decoration of the United States armed forces that is awarded for exceptionally meritorious conduct in the performance of outstanding services and achievements...
to reflect the parallel between the two medals. The eagle
Eagle
Eagles are members of the bird family Accipitridae, and belong to several genera which are not necessarily closely related to each other. Most of the more than 60 species occur in Eurasia and Africa. Outside this area, just two species can be found in the United States and Canada, nine more in...
, symbol of the United States, stands on laurel
Bay Laurel
The bay laurel , also known as sweet bay, bay tree, true laurel, Grecian laurel, laurel tree, or simply laurel, is an aromatic evergreen tree or large shrub with green, glossy leaves, native to the Mediterranean region. It is the source of the bay leaf used in cooking...
branches denoting achievement. The star
Star
A star is a massive, luminous sphere of plasma held together by gravity. At the end of its lifetime, a star can also contain a proportion of degenerate matter. The nearest star to Earth is the Sun, which is the source of most of the energy on Earth...
is used to represent the military service and the rays emanating therefrom denote the constant efforts of individuals to achieve through excellent and meritorious service.

The Meritorious Service Medal is a bronze
Bronze
Bronze is a metal alloy consisting primarily of copper, usually with tin as the main additive. It is hard and brittle, and it was particularly significant in antiquity, so much so that the Bronze Age was named after the metal...
medal, 1.5 inches in diameter overall, consisting of six rays issuant from the upper three points of a five-pointed star with beveled edges and containing two smaller stars defined by incised outlines; in front of the lower part of the star an eagle with wings upraised standing upon two upward curving branches of laurel tied with a ribbon between the feet of the eagle. The reverse has the encircled inscriptions "UNITED STATES OF AMERICA" and "MERITORIOUS SERVICE". The ribbon is 1 3/8 inches wide and consists of the following stripes: 1/8 inch Crimson 67112; 1/4 inch White 67101; center 5/8 inch Crimson; 1/4 inch White; and 1/8 inch Crimson.