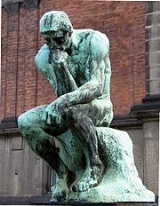 Overview
A statue is a sculpture
Sculpture
Sculpture is three-dimensional artwork created by shaping or combining hard materials—typically stone such as marble—or metal, glass, or wood. Softer materials can also be used, such as clay, textiles, plastics, polymers and softer metals...
in the round representing a person or persons, an animal, an idea (allegory
Allegory
Allegory is a demonstrative form of representation explaining meaning other than the words that are spoken. Allegory communicates its message by means of symbolic figures, actions or symbolic representation...
) or an event, normally full-length, as opposed to a bust
Bust (sculpture)
A bust is a sculpted or cast representation of the upper part of the human figure, depicting a person's head and neck, as well as a variable portion of the chest and shoulders. The piece is normally supported by a plinth. These forms recreate the likeness of an individual...
, and at least close to life-size, or larger. Its primary concern is representational.

The definition of a statue is not always clear-cut; sculptures of a person on a horse, called Equestrian statues
Equestrian sculpture
An equestrian statue is a statue of a rider mounted on a horse, from the Latin "eques", meaning "knight", deriving from "equus", meaning "horse". A statue of a riderless horse is strictly an "equine statue"...
, are certainly included, and in many cases, such as a Madonna and Child or a Pietà
Pietà
The Pietà is a subject in Christian art depicting the Virgin Mary cradling the dead body of Jesus, most often found in sculpture. As such, it is a particular form of the Lamentation of Christ, a scene from the Passion of Christ found in cycles of the Life of Christ...
, a sculpture of two people will also be.

What (if any) are the guidelines/rules/ettiquette for statue placement and orientation in front of building and references or tables for i.e. should a...
More
x